My daughter was looking for a new handset, and I have been very impressed with the Moto G 3rd generation I got for my son a few weeks back, so I started looking around at other Moto handsets.

Her requirements aren’t as heavy as his and she didn’t want such a large phone. I picked up a Moto E first generation. The Moto E line is Motorola’s budget range and the specs are reflected in the price.

It does lack a gyroscope and a digital compass which can make it incompatible with some apps such as Pokemon Go. 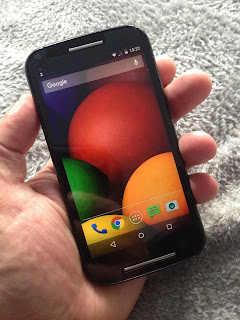 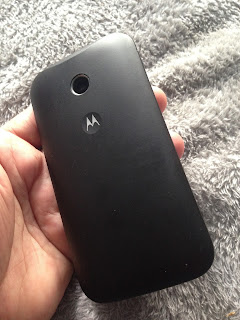 The phone seems very well built. It is an all plastic phone and the back pulls off to reveal the SIM and MicroSD slots. It has a rubbery feel and gives the whole phone a decent grip. Whilst clipped on securely the back did feel a little loose fitting.

It is a budget phone so you don’t expect premium quality when it comes to the screen. However the 4.3” screen features 540x960 px and 256ppi. It offers a bright and crisp display, that is more than good enough for you average user. Viewing angles were good and whilst direct sunlight affect viewing it was still ok to use. 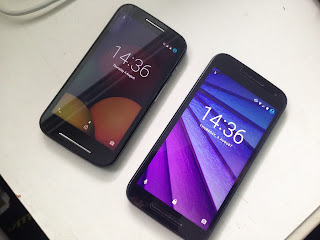 One area where it suffers from its budget price tag is the camera. The rear camera is a 5mpx fixed focus and no flash. It produces decent pictures outside in decent light, but indoors and in poor light it didn’t produce good photos at all. The lack of auto focus also often affected the clarity of the pictures taken. It has no front facing camera, which in a world of selfies, face swapping and video calling is quite essential.

This handset is running Lollipop. Being Motorola is near stock Android and this helps to keep the OS light and slick, together with the 1GB of RAM. Navigating around the phone is quick, installing apps, setting up accounts and sorting out the SD card were lag free. Apps such as Facebook, Facebook Messenger and Chrome loaded quickly. 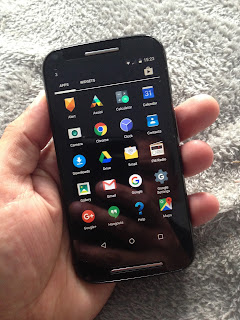 Accessing the Play Store, surfing using Chrome and watching videos on YouTube were great over wifi as well over 3G. Sites and videos loaded quickly and the experience was great.

Using it as a phone was good. Call quality was superb making conversations easy, the speakerphone however lacked volume. Music and YouTube also followed suit, lacking volume and any bass. In crowded or noisy environments I would expect to find it hard to hear music.

NOTE: I should point out this handset was faulty in the speaker department. When it first arrived no sound would come out of it - a common issue. It did eventually work but this could have impacted on volume.

I haven’t used this Moto E enough to give a true account of the battery life, but its low screen and budget hardware should see the fairly decent sized 1,980 mAh built in battery. Setting up, installing and having a general look around the phone and apps didn't really impact on battery.

The first gen Moto E lacks the premium hardware of its bigger siblings - but that is reflected in the price. Pushing aside its poor cameras, the performance of this little handset is fantastic. Its smaller screen and stock Android gives a great experience.

They can be picked up for around £20 on the used market and for a handset running Lollipop this is an amazing bargain.