I've been using Chromecast audios for a few years and I used to have an original Chromecast (video), the one that started it all, but have somehow lost it at some point, but then that's the problem with such tiny devices! If they're not attached to the telly or computer they are easily misplaced! I recently got the chance to setup the latest Chromecast for a friend, the snappily titled Chromecast With Google TV. The major difference compared with all the older versions is that it finally has a hardware remote control! 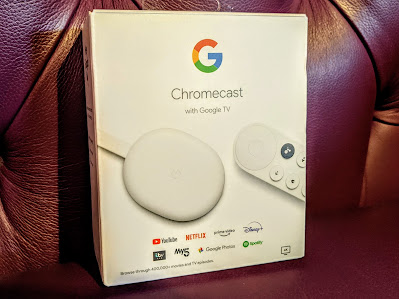 It arrived in the usual Google cardboard box, a bit bigger than the older ones of course. you get the device itself, the remote (and 2 AAA batteries) and a USB C power supply, that looks the same as what you get with Pixel phones, and a little instruction booklet. 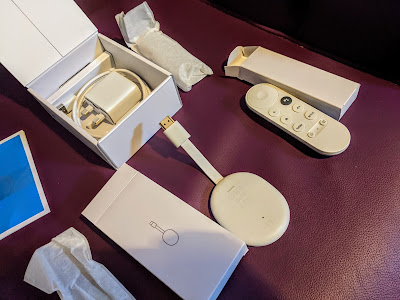 I like the simple kind of flattened soap bar shape of the device but I think the remote really needs a few things changing. The little 4-way control around the Enter button can do fast forward and back but it would be nice if it could do Skip To Next/Previous Track. 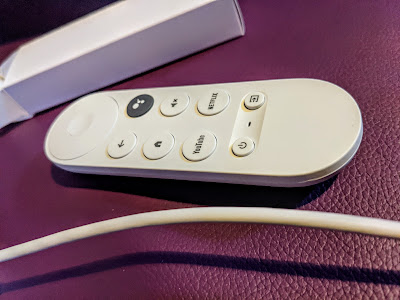 I do not need the Netflix button but it cannot be reassigned without connecting the device to a computer by USB (with Debugging set in Developer Settings) and using a third party tool to change the buttons required. But that still means sacrificing one button for another. Another possibility is buying a Bluetooth controller and using that instead, but that's extra expense on top of the £60 of the device itself. The older Chromecasts were half that price. I didn't get to setup voice control with it, which i suppose you could use to skip a track but it's just not as quick or as simple as a hardware remote. 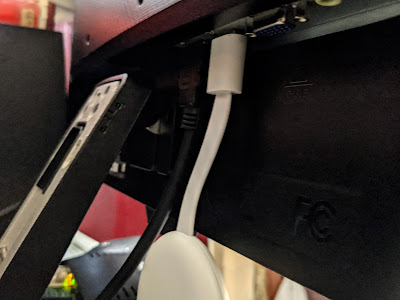 I do like that this device can use HDMI-CEC to control your TV - change the volume of it and switch HDMI input to the Chromecast - but this only works if your TV is supported in the long list of devices in settings. It wouldn't work properly on a Ben-Q monitor with built-in speakers that I was using. 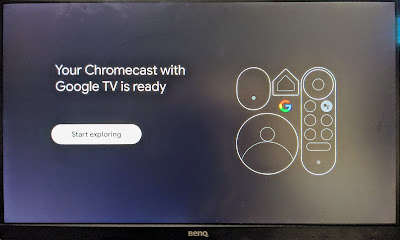 Just like previous Chromecasts, the setup was very easy, the only bit that took a few minutes was it downloading updated firmware for the device and for the remote. 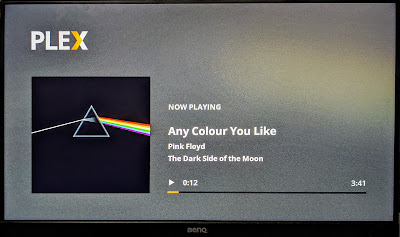 Overall I do like how well the Chromecast with Google TV works, that you can now it's based on Android you can install Android apps from Play, which gives it more use than the old Chromecast video I used to have and it feels a lot more refined now, I just wish it came with a better remote than had the functions of the quick remote in the Google Home app on my phone. It's worth getting one if it does what you need it to do, and was certainly a far better experience than the Roku stick I had a few years back.