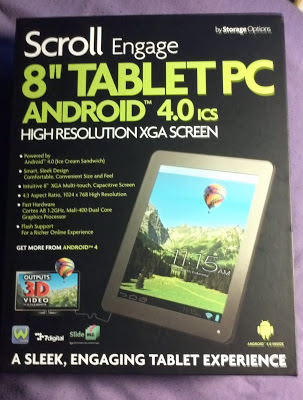 I looked around for a long time to find a budget Android tablet with reasonable specs for my birthday. It had to have the ability to use Google Play without too much hassle, have a reasonable screen resolution and size, 1GB RAM, 8GB or more internal storage and have a 1Ghz or higher CPU and cost no more than £130. Any less RAM or CPU would be too sluggish for my requirements. After a reading a lot of reviews and comparing lots of cheap Chinese tablets I discovered the Scroll Engage by Storage Options. It provides all my requirements and more. It has a 1.2Ghz Cortex A8 processor, dual core Mali-400 graphics processor, 8 inch capacitive screen at 1024x768 and 1GB RAM and the MicroSD card slot can take a card up to 32GB.

The Engage was packed and presented quite nicely, with protective films over the screen and rear.  In the box there's a little manual, a Micro-USB to USB socket cable for attaching USB dongles etc, a 5V charger, cheap earphones, and a micro USB cable for connecting the device to a computer. 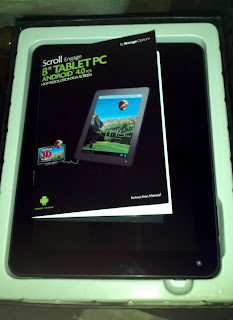 The Engage feels quite solid and has a metal back to it. In landscape mode on it's right hand edge there's a hardware power/standby button, 3.5mm headphone socket, microUSB, Mini HDMI, power and MicroSD card slot. I have bought a 16GB Class 10 card for storage of music, photos and videos. The only thing I'd criticise here is the positioning of the speaker on the back of the device, which is very quiet, and is muffled if you use the device flat on a desk or bed. I recommend SpeakerBoost app to get the volume louder.

The Engage feels fairly smooth as you can see from my video and unlike in another review I might mention, Apple's website loads perfectly fine! At least it does in Firefox, which works very well on the device. The viewing angles of the screen aren't brilliant but not bad for a cheap device and it is nice and bright. However you have to be patient with budget tablets like this, I get a fair few 'not responding' messages on some of the heavier apps, just be patient!

By default the Engage comes with a reasonable selection of apps, including a couple of interesting additions like Evernote. SlideME and ScrollApps are used by default for installing apps and Google Play is not mentioned at all in the manuals etc for legal reasons, but it is accessible using the Play widget and so far I've had no trouble installing apps, with only the occasional app not being compatible, and I really have installed a lot of apps! For some reason on some apps like Google+, the top edge of the app is not tappable, so I've had trouble Plussing posts and adding people to Circles on it probably since the Scroll is not an official Google authorised device so isn't quite compatible. Other than that I have had no real problems with the device.

Update: One of the best things you can do is install Apex Launcher, which works nicely on the device, and straight away gives you a Play shortcut! 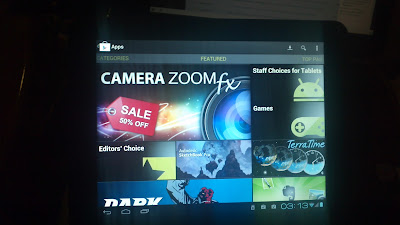 
Price/Performance: 9/10
Good value for the money - a reasonably performing tablet for £100!

Screen: 5/10
Viewing angles not amazing but generally fine for the price. It's also much brighter than I expected.

Overall I'm rather pleased with the Scroll Engage, and I think it's good value for money. At nearly half the price of the Google Nexus 7, don't expect it to be as powerful but it's still quite capable of handling the usual YouTube, Facebook, video playing etc. One thing that it has that the Nexus hasn't got is the MicroSD card slot.So if you're after a tablet for under a 100 quid the Scroll Engage is pretty good choice. It's also worth considering the bigger Scroll models for a little bit more cash.

More photos of my Scroll Engage can be found here