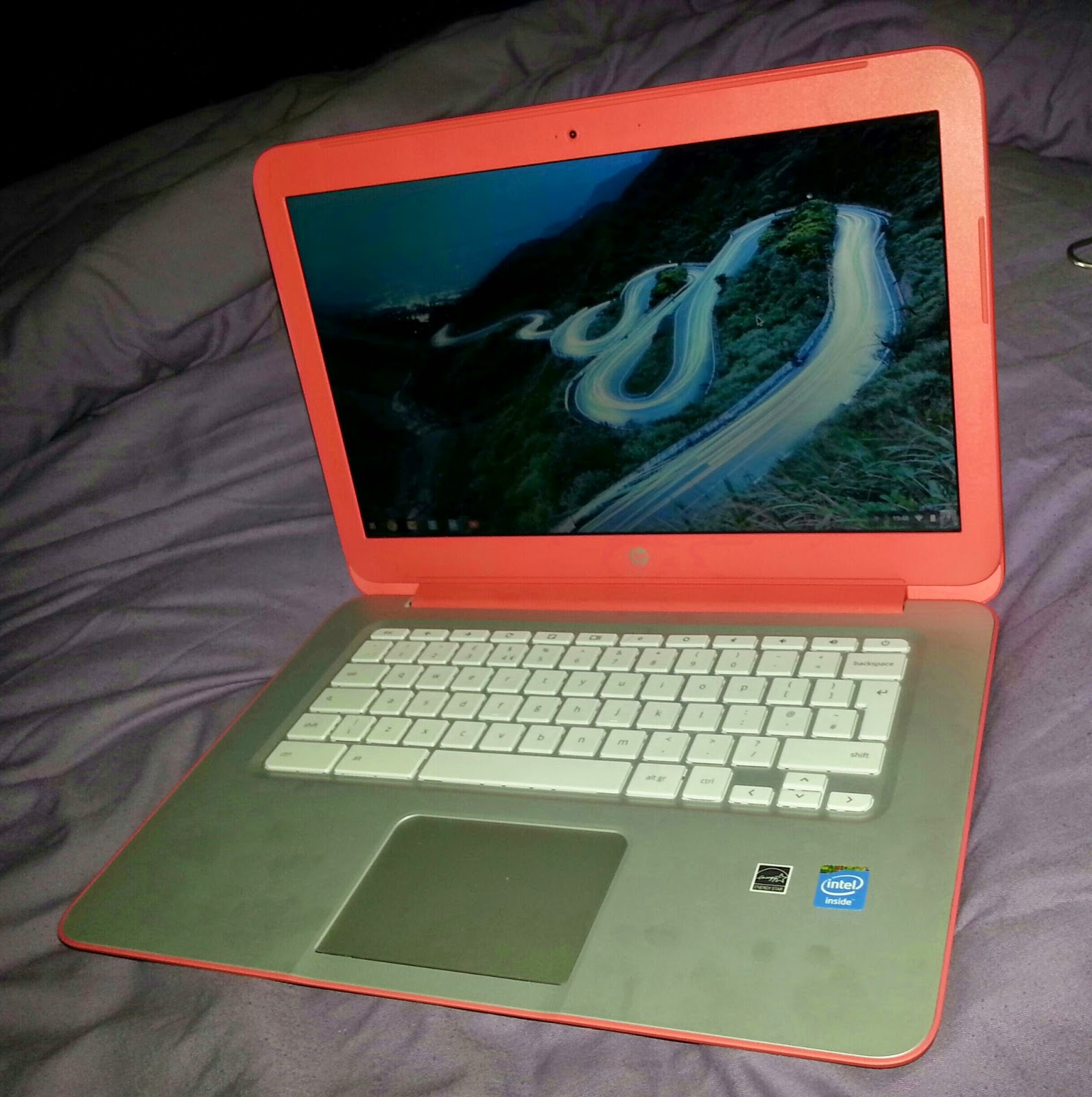 When I was deciding on getting a Chromebook, I made the decision to go for the outgoing version of HP's Chromebook 14, as I needed a large 14 inch screen, Intel Haswell CPU and 4GB RAM. I don't like tiny 11 inch screens, and the larger screen also means a decent size keyboard. Although this makes the HP heavier than some Chromebooks, it is still around half the weight of my chunky old 6.6lb Sony VAIO! I could have waited and got the newer replacement model 14, with better screen, but that only has 2GB RAM, and an ARM CPU, which is annoying. I need plenty of RAM as I tend to have a lot of tabs open and planned to run Xubuntu using Crouton, which in theory works better with the Intel CPU. 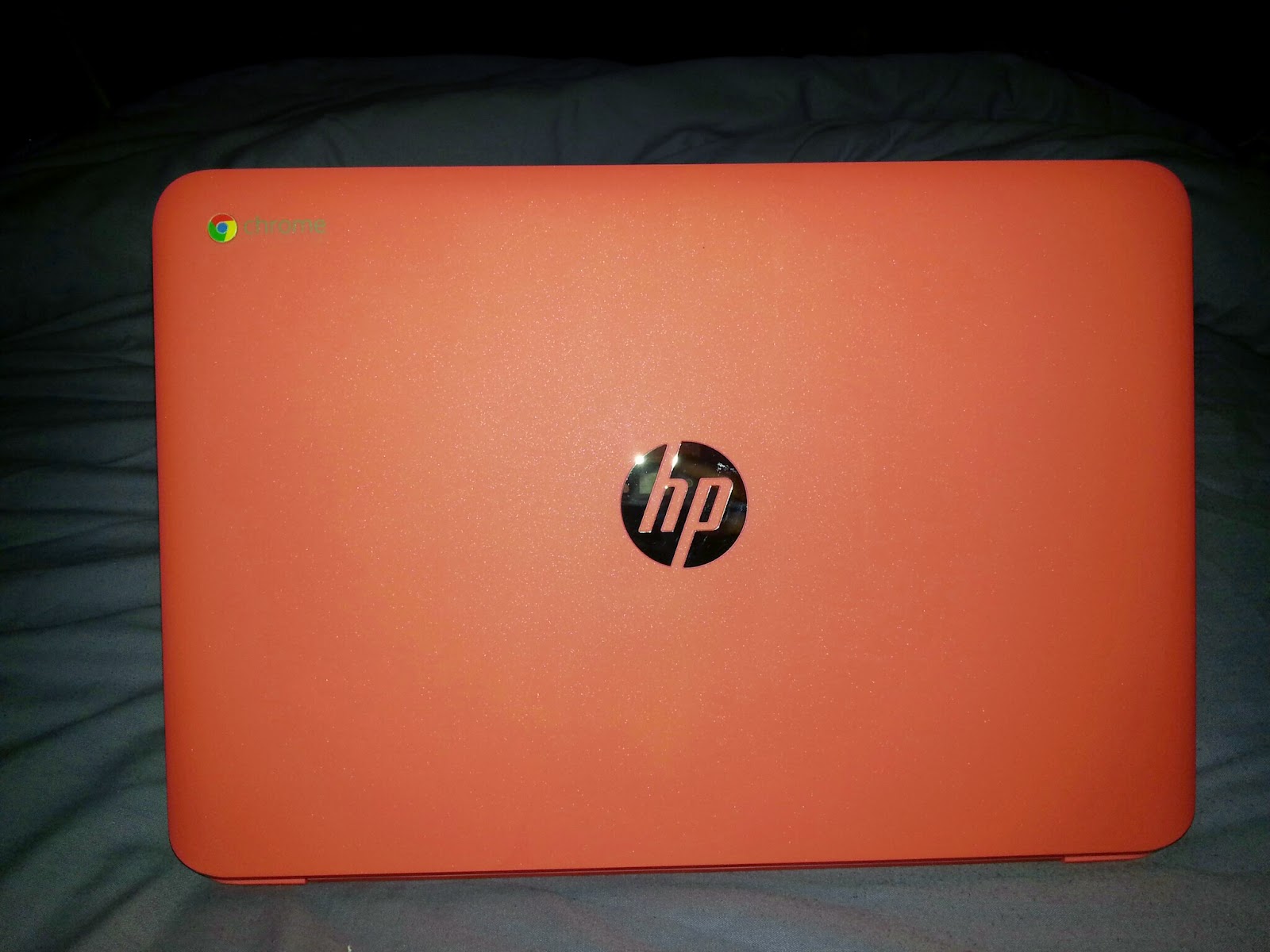 I received my Chromebook on Friday in a quite plain brown HP and Intel branded cardboard box with large padding blocks inside protecting it. I was struck by how slim and well built the HP 14 feels. The underneath is a kind of rubberised plastic, with 2 ventilation grills. 4 rubber feet prevent the device sliding on glossy surfaces. It has 2 speakers at the base of the screen, under the hinge, and they sound fairly good for what they are. 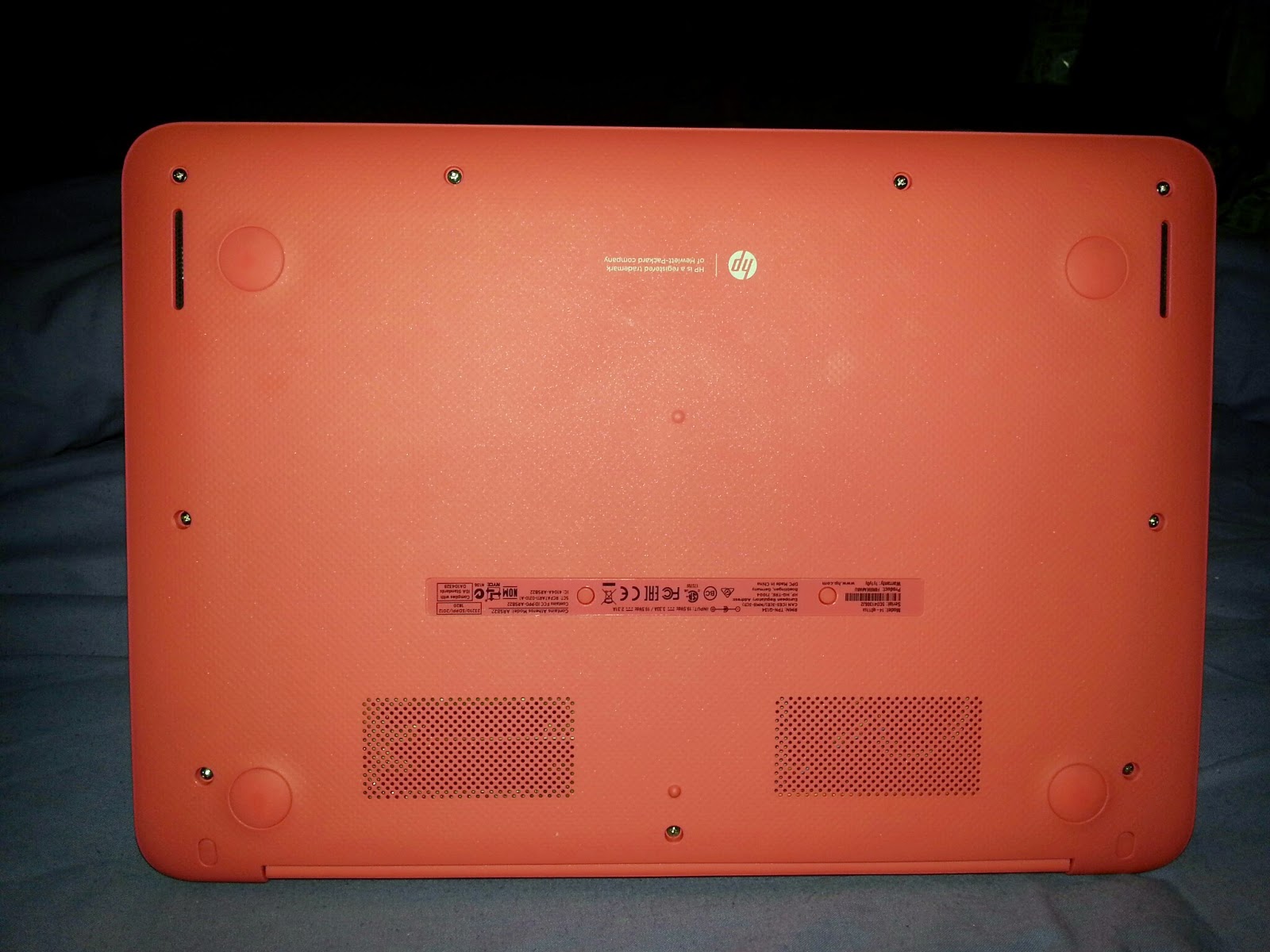 In the box there's a little Setup Instructions leaflet, the warranty and small PSU, which reminded me of the one from my Samsung N145 netbook. 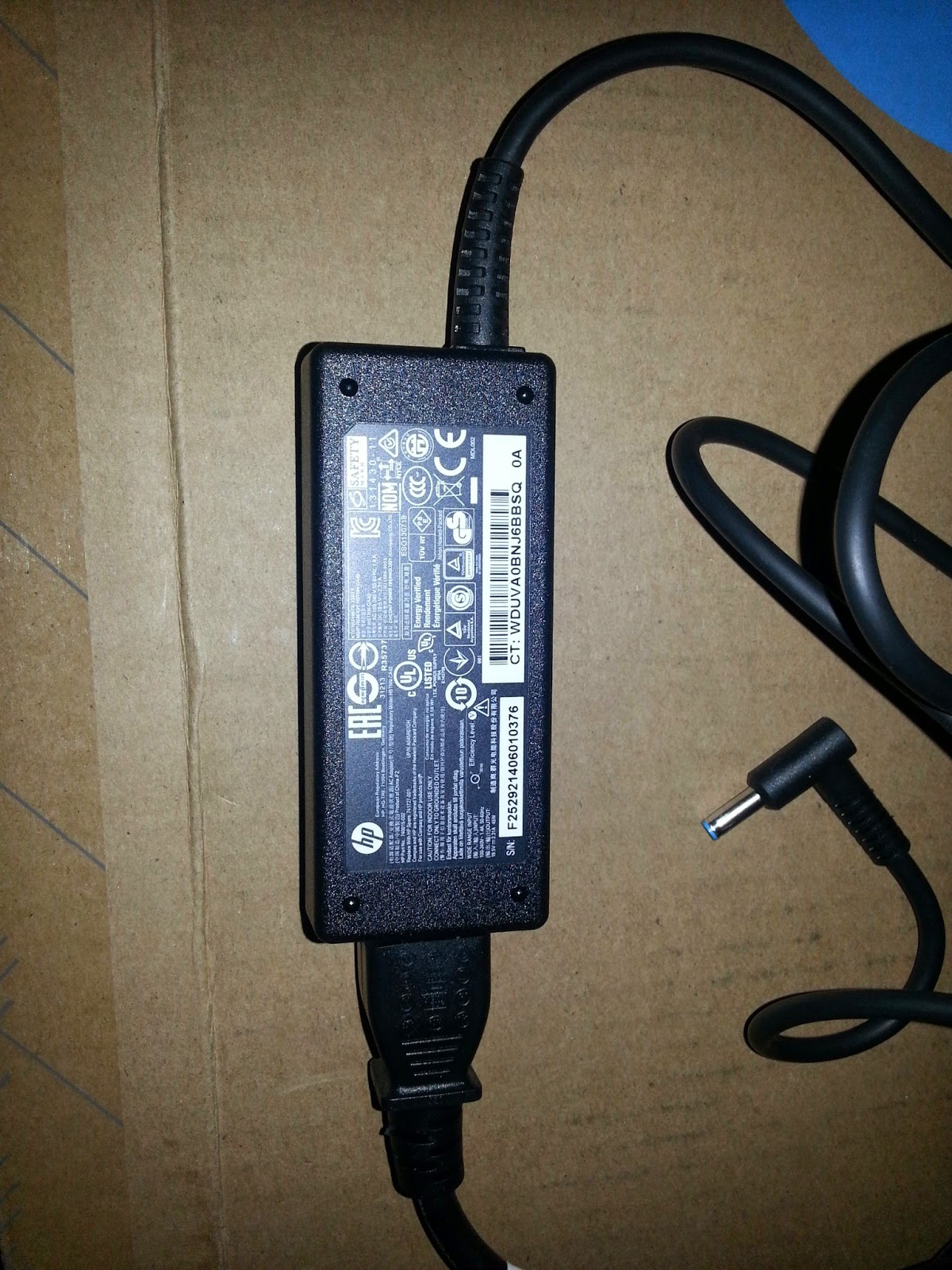 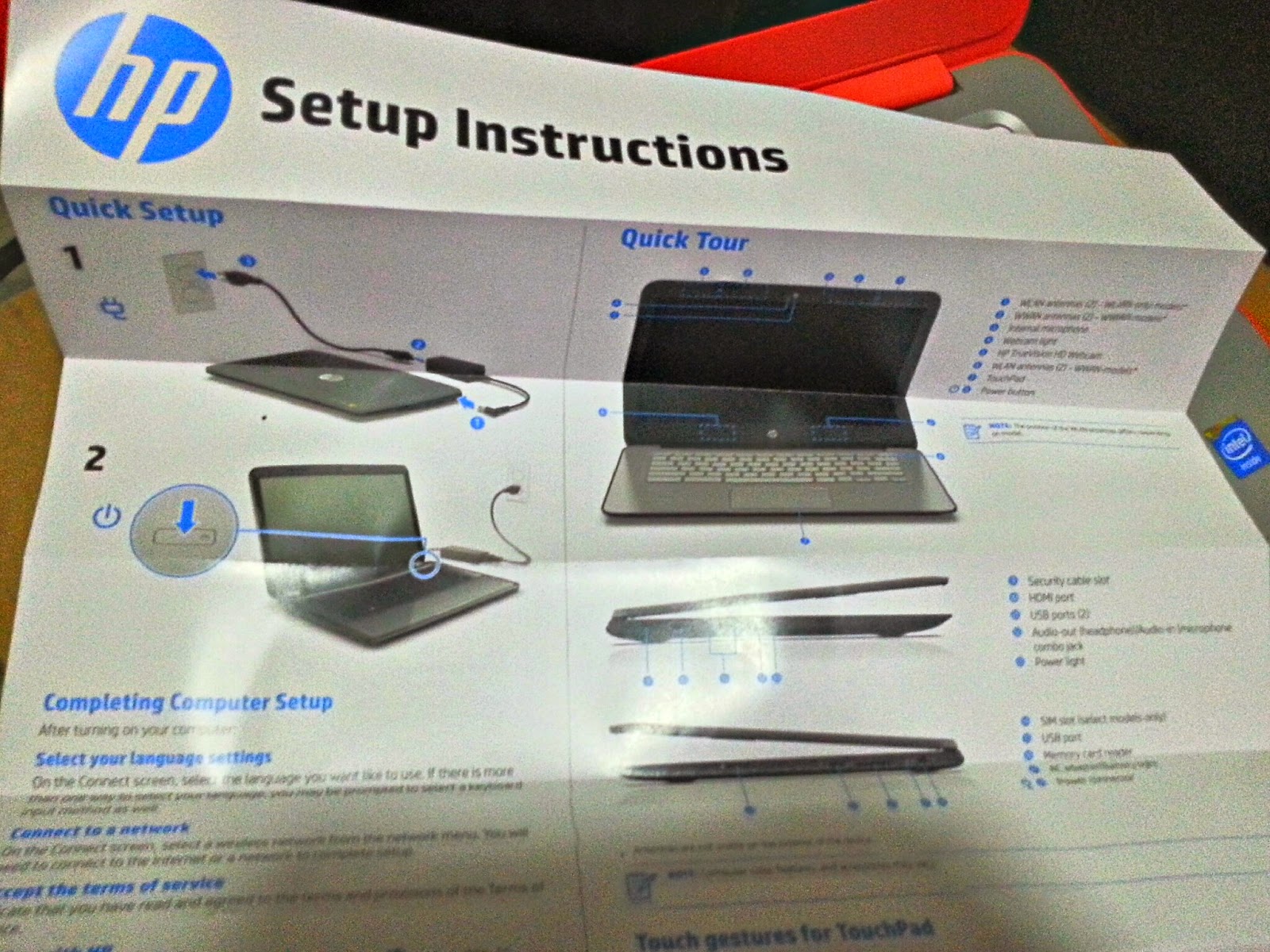 The left side of the HP has two USB 3.0 ports, HDMI out and a headphone/mic socket. The right side has the power input, a single USB 2.0 port and the SD card slot. Photos on top of my Sony VAIO for comparison: 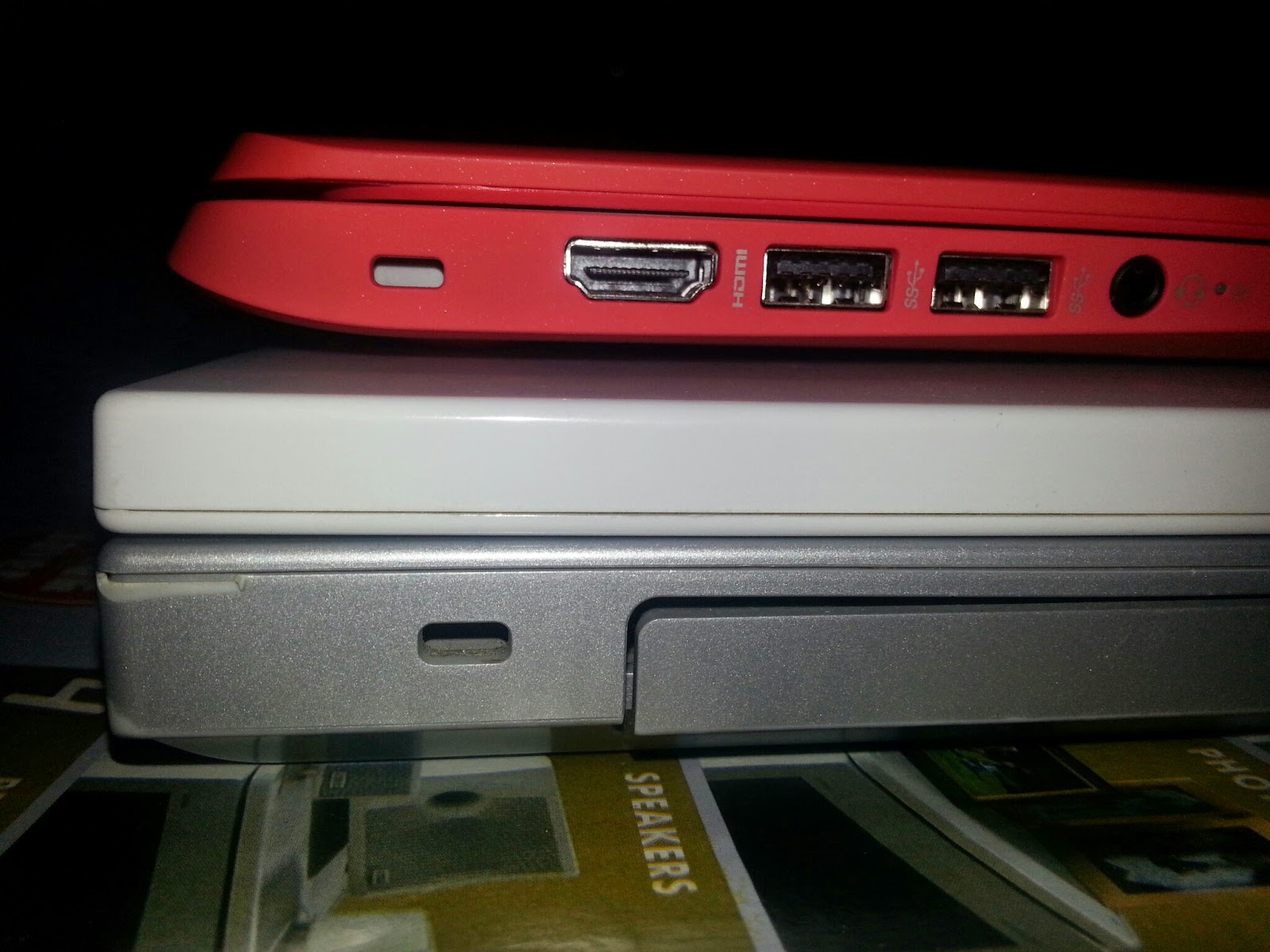 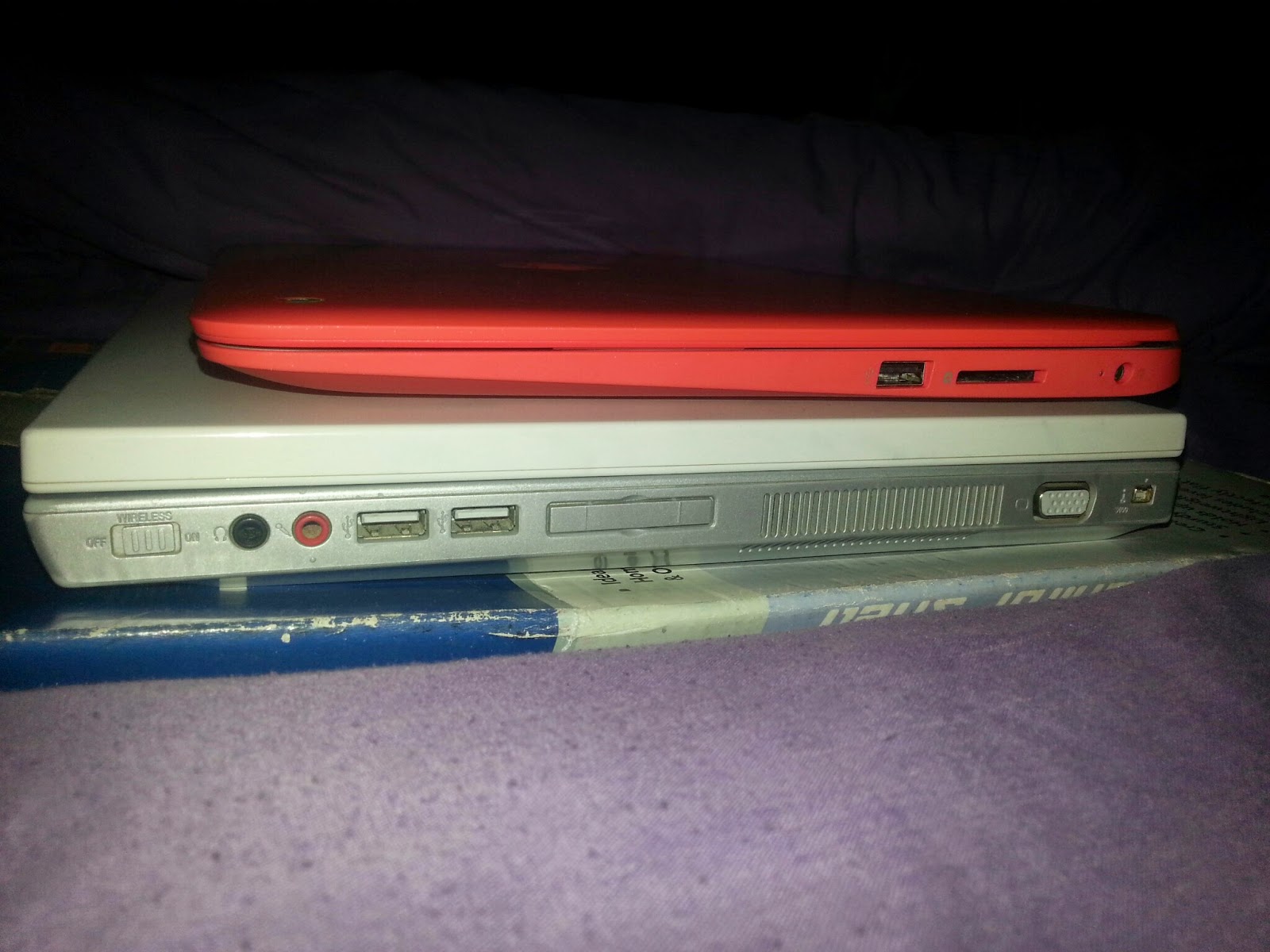 The setup instructions are barely needed as the Chromebook is so simple to setup, mainly constituting wireless setup and signing into your Google account. 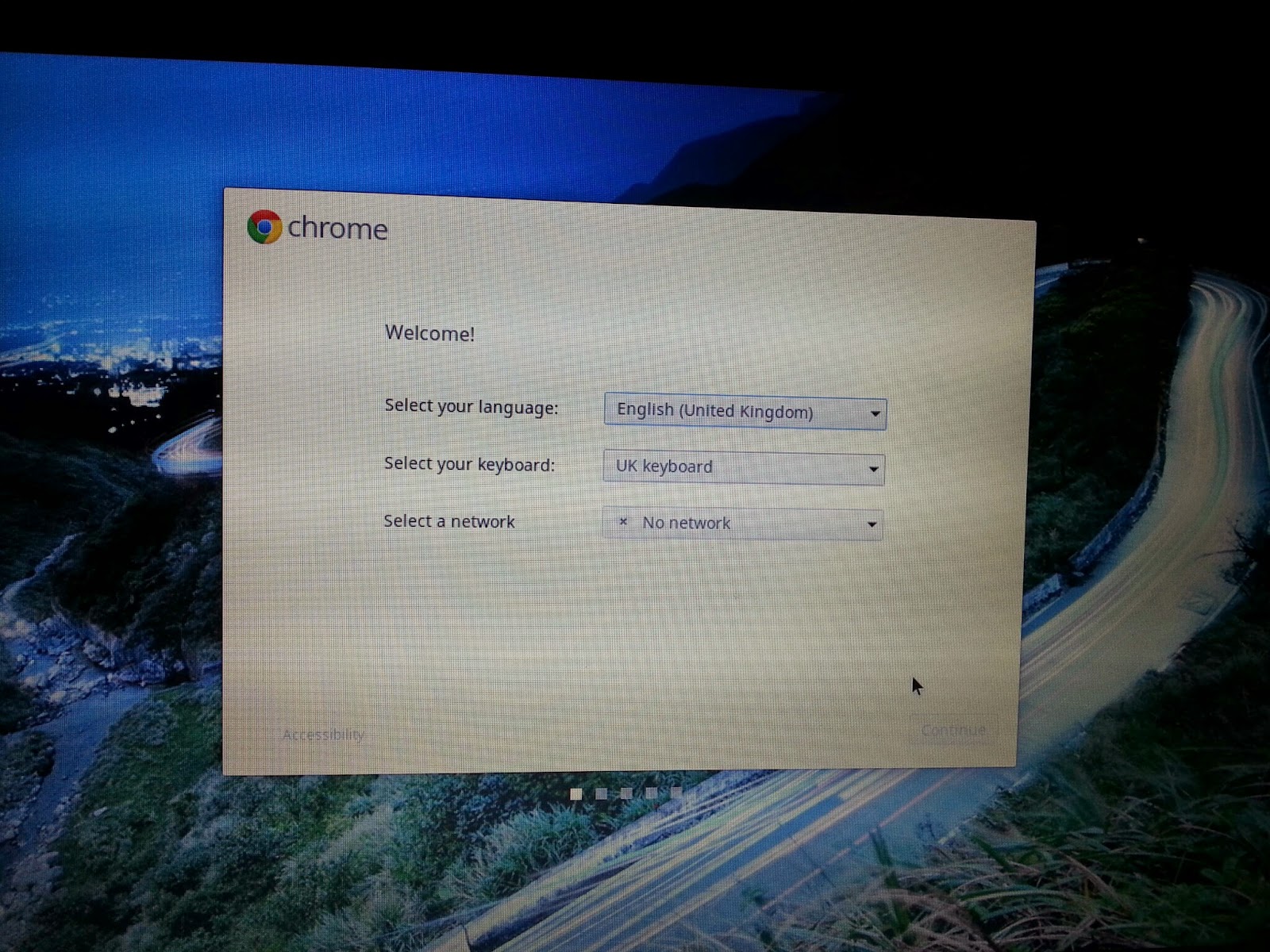 After the brief setup process is the best time to setup Crouton to install Xubuntu alongside of ChromeOS. To do this you need to enable Developer mode, which wipes the device. I found plenty of good howtos, but I used this one here. Instead of Unity though I chose XFCE desktop and Trusty as my 'buntu version:

This gives you a minimal Xubuntu setup. It's best not to install too much as it only has a 16GB SSD, of which part of that is taken already by ChromeOS. 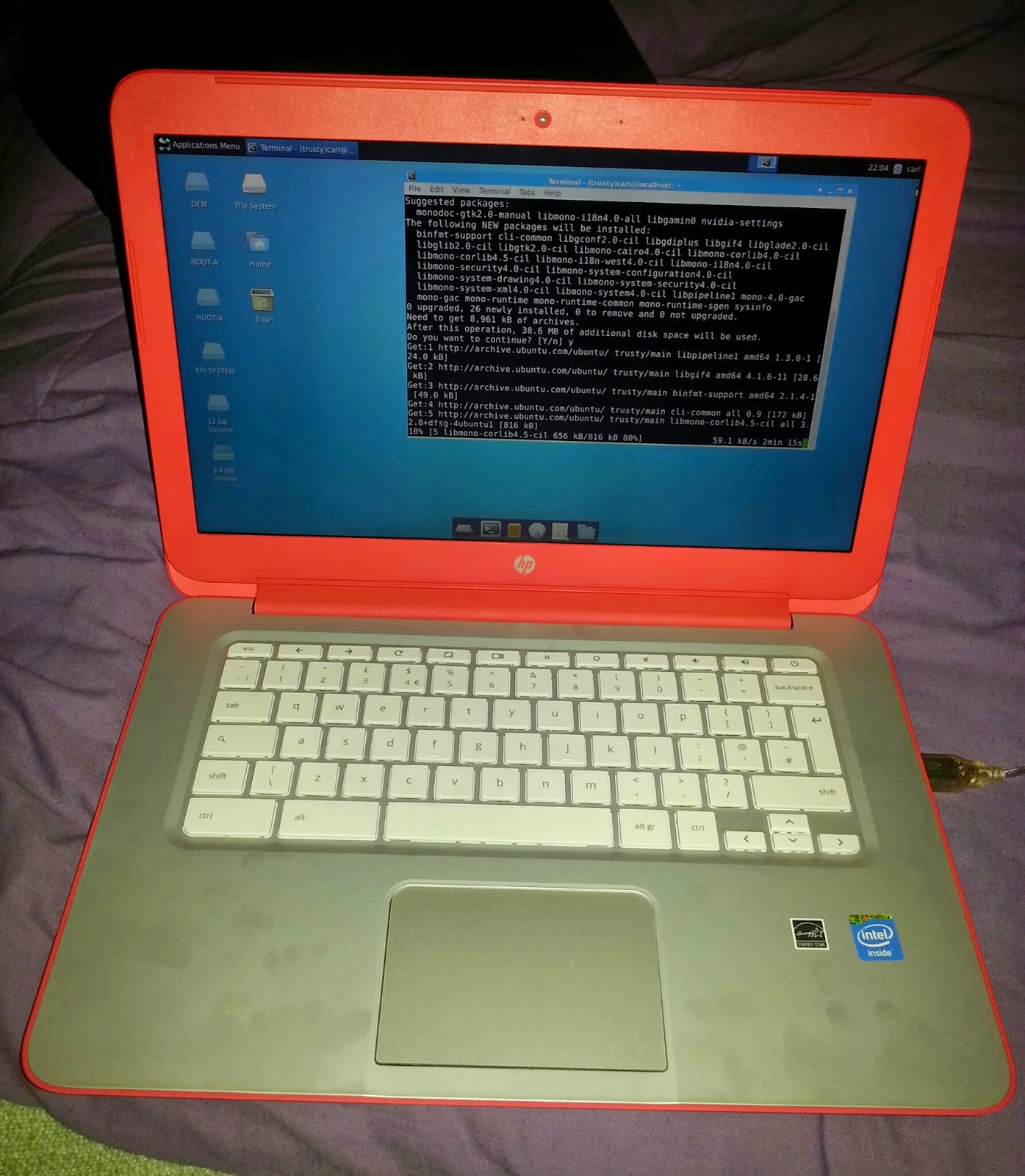 The great thing about using Crouton is you can quickly switch between Chrome OS and Xubuntu using the CTRL + ALT + Shift and the arrow keys (located with the function keys along the top of the keyboard). 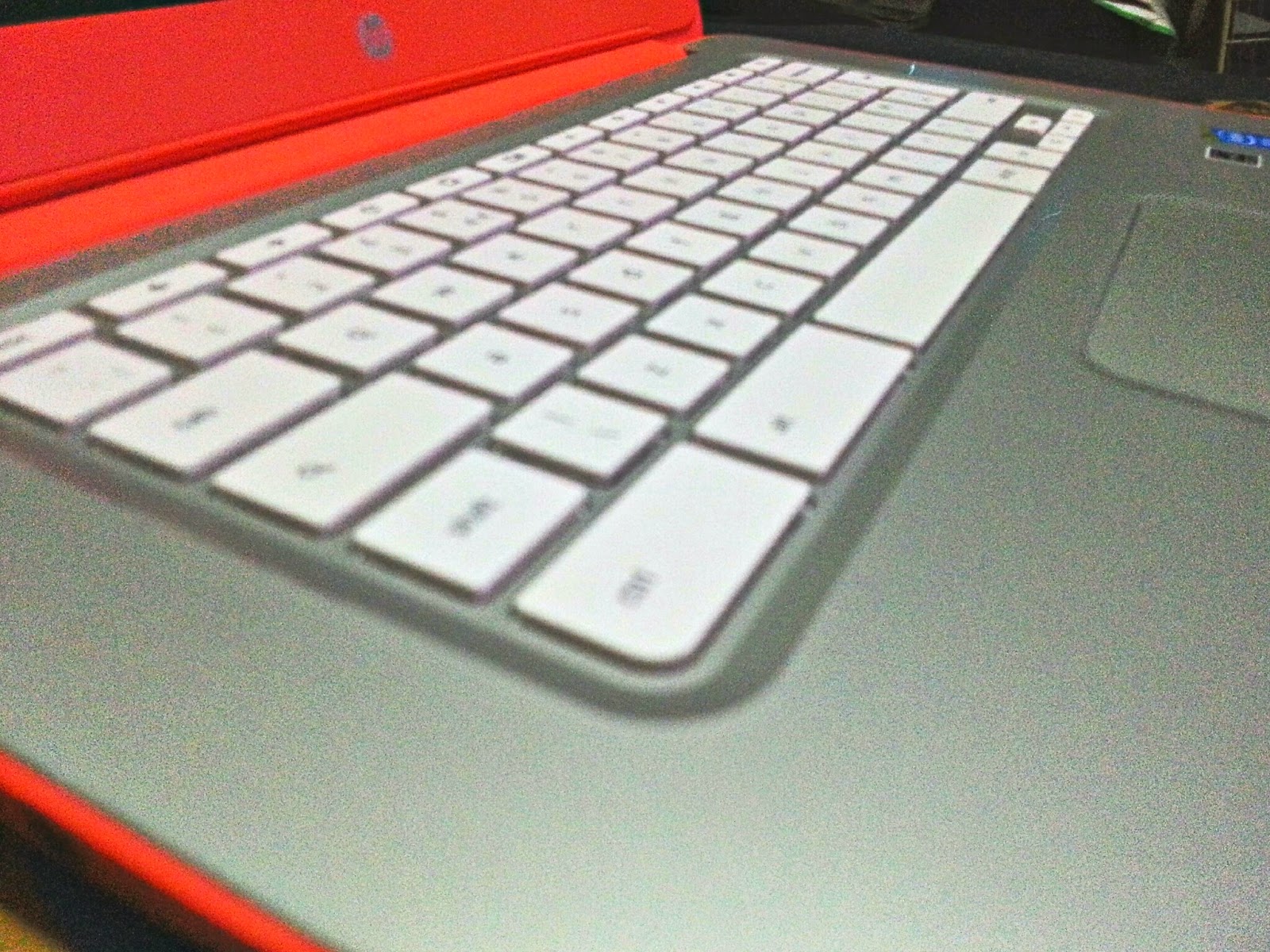 I like the smooth aluminium around the comfortably-sized chiclet keyboard. The keys have a fine texture so your fingers are not slipping off them and size and layout suits me. You'll probably notice the metal is a bit of a fingerprint magnet though! You'll also notice I bought the "coral" coloured model, because the white and silver models were out of stock. In some lights it looks pink and some lights it looks red or orange. I plan on toning down the look using these covers from Amazon. Some have complained about the screen but I am happy with it, perhaps because it's still better than a lot of my old laptops. The viewing angles are fine and it's plenty bright.


More than just a browser.

I have found that I can do a bit more than just web browsing on my Chromebook. It has a basic file manager that can access and play videos from USB hard drives etc. Chrome OS has a desktop with wallpaper and a panel (Google calls it a shelf) where you can pin apps to. There is a growing section of the Chrome store devoted to apps that work offline too. At the moment the only time I find myself switching to Xubuntu is to use Gtk VNC Viewer, as for some reason I can't seem to connect to my server using the VNC Chrome app.

The best thing about the HP Chromebook 14 is closing it and opening it later and finding it ready immediately. Suspend and resume works perfectly and the battery lasts over 8 hours, so you can use it pretty much all day without needing to plug it in. Also, from a cold start, it boots to the login prompt in 5 seconds! A couple more seconds and it's ready to work.

And there's still more interesting features being implemented in Chrome OS that I look forward to trying. With Android Lollipop phones will unlock when in proximity of your Chromebook (should you choose to use that feature).  Also you'll soon be able to run many more Android apps on your Chromebook. There are also plenty of choice when it comes to Chromebooks with new ones being released and updated every year. 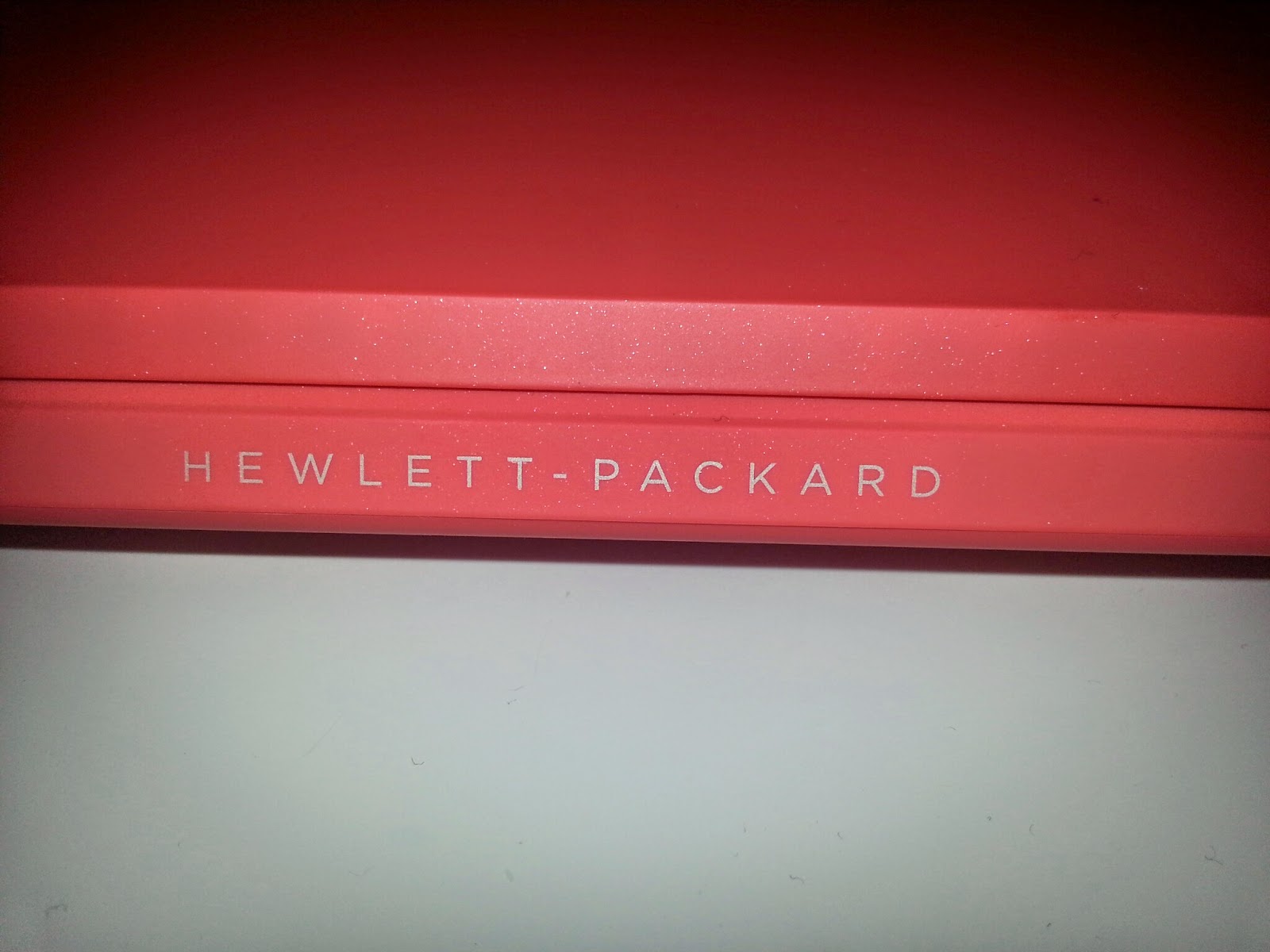