Well after having had terrible audio recording problems on my Nexus 5, I decided I needed to replace it ASAP and on a budget. I did not have the cash for a Nexus 6 or second gen Moto X, which would be my ideal replacements, but I had enough for an LG G3, which suits my needs. My requirements were a half-decent camera, 16GB+ storage, not too much bloat and not too pricey! So when I spotted an LG G3 at a good price and in fantastic condition, on Vodafone, I jumped at it. It still has it's original charger, lead, earbuds (with spare buds), it really looks hardly used. The 5.5" 1440 x 2560 (~538ppi) pixel screen still looks amazing, with no scratches or blemishes of any kind. The dark grey back on mine kind of looks like polished aluminium from a distance but is actually plastic, but it still feels like a premium device. It's so slim and easy to hold despite having a removable battery. The back is smooth so be careful on inclined surfaces as it may slide off, takes a little getting used to after the rubberised back of the Nexus 5. 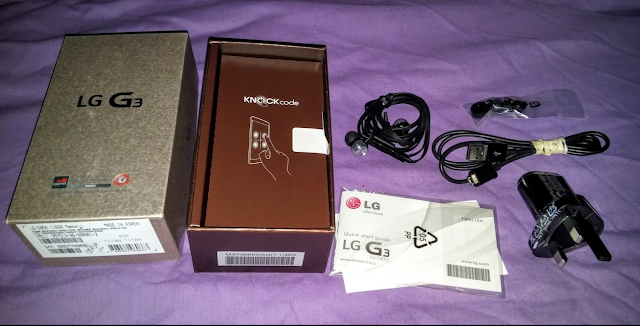 The volume controls and power button are on the back of the device under the camera. You can also unlock the device by tapping on the screen in a pattern, instead of using a pin or pattern, even when the screen is off. Also 2 quick taps turns the screen on. It takes a little getting used to but after a few days of use it has become practically second nature, and I keep accidentally trying to use Knock To Unlock and feeling for buttons on the back on my other devices that don't have them! It's also arguably more secure than a pattern since it means there are less marks on the screen to show where your fingers have been. A pin unlock is used as a backup in case you forget your knock code. Also I noticed sometimes it asking for my backup pin for some reason, maybe because something in my pocket has tapped on the device too many times, I have not been able to track down exactly why it has been doing this and have disabled knock to unlock.

Starting on KitKat when it was released in mid 2014, LG updated the G3 to Lollipop 5.0 later in that year. LG's skin isn't too bad compared with such monstrosities as Touchwiz (at least the last time I used it) and I like the way you can choose which extra LG apps you want at setup time, such as the FM radio app, Calculator and rather handy QuickRemote (TV remote control using the IR) app that I installed. Amazon, Kindle and Ebay apps were all preinstalled. 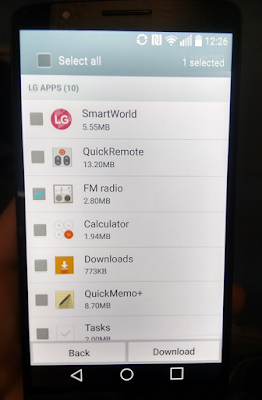 I've installed all my usual app choices and made it look a little more like stock Android using Google Now Launcher. It's good to see the LG Gallery app is much like the one that used to be stock in KitKat or Jelly Bean. While we are on the subject of versions, it is rumoured that the LG G3 might actually skip out 5.1/5.1.1 and go straight to Android 6.1 Marshmallow. Update: T-Mobile now lists the G3 in the first wave of Marshmallow updates.

Despite having LG's minimal skin - most visibly noticeable when you pull down to see your notifications - it really is just as buttery smooth with Lollipop as it was on my Nexus 5. I have not encountered any annoying lag yet and I like some of the extra features such as the Dual Window mode where you can run two apps at once - just about usable on a 5.5inch screen. I've not used that since Samsung's implementation on the S3 I had, though this feels much smoother.  One little thing I miss from stock Android is you cannot access the quick settings drop down from the lockscreen.

The G3 has a 13MP camera that can record video in up to 4K resolution! Not that you would want to do that too much, since it takes up a lot of storage space, you'd probably want to get a 128GB MicroSD if you plan on doing that! The LG camera app shows advanced features when you tap the little 3 dots, so you can enable various modes. Here's a screenshot showing G3's fancy laser focus: 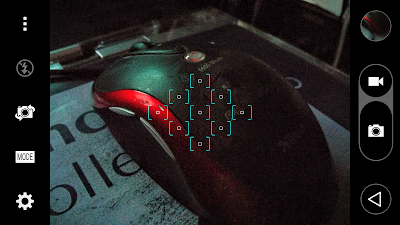 Of course you don't have to use the default LG camera, there are plenty of alternatives but they might not use the laser focus. I have installed Google Camera, mainly because the LG app has a Panorama mode but cannot create Photospheres, but for most of the time I think I will use the LG camera app. Unfortunately the G3 is not compatible with Manual Camera, whereas my Nexus 5 was compatible. The G3 has a 2MP front camera which has a very wide angle for getting more people into a shot. It can also recognize gestures, for example if you open and close a fist it starts a timer so you don't need to touch anything to take a shot.

Quality wise, photos seem to be similar in colour reproduction as my Nexus 5 was, but with 13MP over the it's 8MP, there's definitely more detail there. The G3's optical image stabilisation and laser focus mean it focuses very quickly, quicker than the Nexus 5. It is also great for close-ups. 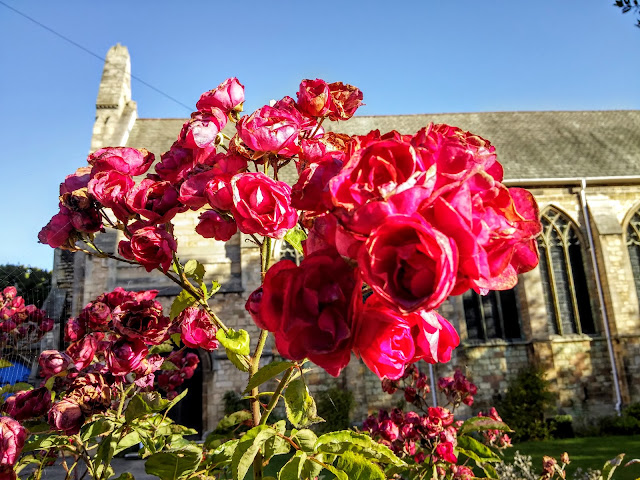 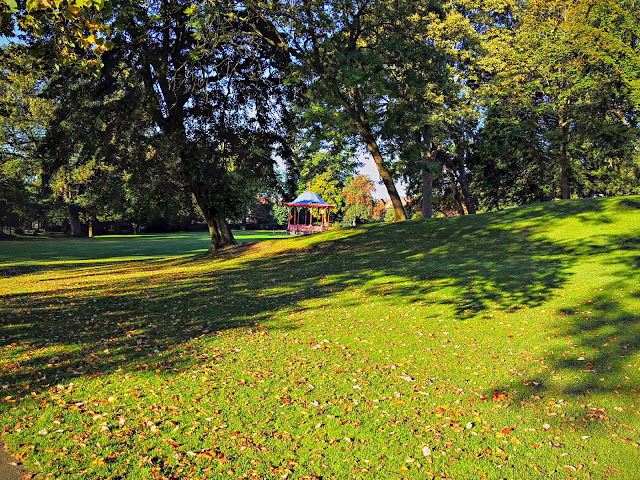 One neat feature I like is you can get straight to the camera from screen-off by holding the Volume Down button for 2 seconds, ideal for quickly taking photos. Also if you hold the on-screen shoot button it turns on burst mode. When these are uploaded to Google Photos, these get "Autoawesomed" into animated gifs.

You can find also view these photos and more on Flickr.

Video quality is great too. I recorded the following video at 1080p (30fps) and I am impressed with the image and especially the sound quality from the built-in stereo mics.

The LG G3 has a fairly sizeable 3000mAh removable battery (compared with the Nexus 5's 2300mAh fixed battery), but it also has that vivid 1440 x 2560 pixel 5.5inch screen to power, that's a lot of pixels to push, so it kind of balances out. Today I went for a 4 hour walk, taking photos (and using GPS for maps) and a few videos, came back and let Carousel and Google Photos upload them all. I also listened to a little music, browsed a little, and installed some more apps. I still have 16% battery after just over 12 hours and an estimated 2 hours battery left. I also liked that it warned me that Pushbullet was using too much battery so I could stop it. Of course, unlike the Nexus 5, you could carry around an extra fully charged up battery for emergencies. Having said that I tend to carry a 10,000mAh battery charger just in case I get low on battery. 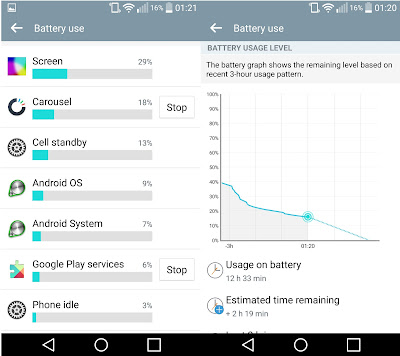 Overall, so far, I am really happy with the LG G3, I love it's beautiful quad HD 5.5 inch screen, generally buttery smooth operation, IR and great camera. I'm definitely sold on large screen devices now, aka "phablets"and 5.5 inch isn't too cumbersome, especially with it's slim profile. I am considering getting a suitable case to protect it, possibly a Spigen as I liked the one I had on my Nexus 5. The ability to use a MicroSD (up to 128GB) and removable battery could be handy for long photo taking and/or HD video recording sessions. The only downsides to the phone I can see so far is some of the LG UI is ugly, and you can't remove some of the preinstalled apps, at least not easily, luckily there are not too many. Alternate ROMs exist for the G3 but you then lose the laser focus on the camera and IR remote functions. Hopefully LG will update it to Marshmallow anyway.

So, if, like me, your budget can't stretch to one of the newer flagships like LG's own G4, or a Nexus 6, or the second gen Motorola Moto X, then the LG G3 might be a good choice as it is still a fairly decent phone. Feel free to share your experiences with the G3 in the comments below.
Posted by Carl Draper at 18:10