My daughter was in need of a new phone and she insisted on a Samsung and preferred a gold one. So after looking around saw the Samsung J4+. This is a mid-range handset with a premium look, that retails, SIM-free, at around £160 on launch.

Featuring a 6” screen, 2GB RAM, 32GB internal storage and 3300 mAh battery it packs a punch for its price. 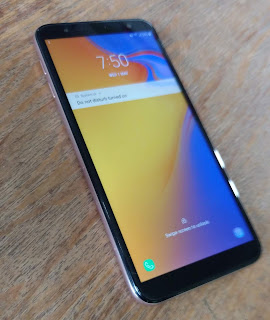 As well as that it comes with Android Oreo - and is due to be updated to Pie - a 13 megapixel camera and 5 megapixel front camera which even has a front flash. It has a MicroSD slot and 3.5mm headphone socket, but uses microUSB instead of the newer USB-C. 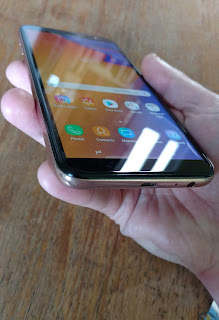 This phone isn’t going to be up to heavy gaming - but it isn’t marketed for that. The quad-core processor and Adreno 308 GPU is more than enough for everyday use and average games. This is aimed at the social media generation, the communicators, the picture takers and Snapchat fans.

Its large screen obviously makes it a large phone at 161.4mm x 76.9mm, but it doesn’t feel chunky and is only 7.9mm thick. My daughter has the gold version - also available in black, pink or blue. The colour refers to the back and side edges, the front of all of them are black.

The back of it however is a finger print magnet, within minutes of handling the phone it was covered in smudges and marks. 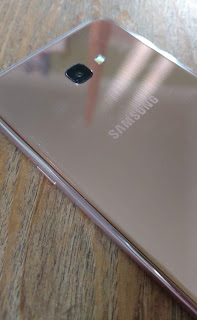 For a mid priced phone the screen is very impressive. 720 x 1480 pixels on a 6" display offers a very crisp view.

The left side has the volume buttons as well as the SIM and MicroSD card tray/slots. The right side has the power button and speaker. Yes, the speaker is on the side. It sounds odd but it makes better sense than on the back (which can be muffled when laid down), but I prefer mine on the front.

The J4+ runs Android Oreo 8.1 overlaid with the Samsung Experience - the newer name for TouchWiz. The system runs fast and there are a lot of fans of the Samsung interface but I prefer stock Android without the cutesy bright interface. 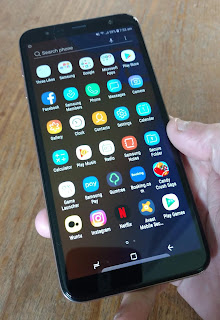 The cameras perform well, the 13 megapixel camera takes great pictures, that only suffer in very low light and the 5 megapixel front camera works excellent for its intended purpose - selfies and video calls.

It has a huge 3300 mAh battery gives it enough power for nearly two days - and it could be pushed more with light use.

Overall, I have - and my daughter has - been impressed with this offering from Samsung. It is a great looking phone and runs super smooth. Anything we have run on it, loads and operates with no lag or feeling sluggish (not that you should expect it to for a new phone). 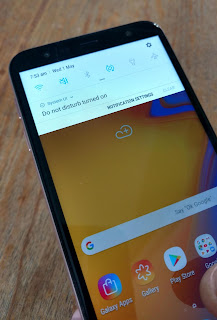 It is difficult to write a review for phones these days, as they all do the same and in fairness all do it very well. Unless there is a feature not up to standard or a design that isn’t to your liking, then a phone is going to please you.

With that in mind, the Samsung J4+ is a great mid priced handset with a great feature set, decent power, great battery and nothing bad to say about it and if you like the Samsung Experience you will enjoy this phone. 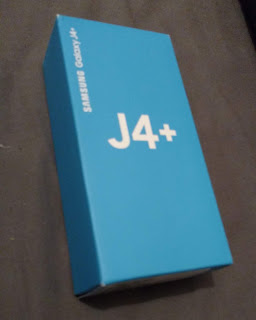 If you are wanting a big phone to keep up with your followers all day and pose for selfies then you will like this phone.