I've seen a lot of swish looking mock-ups and modified versions of Rhythmbox such as Rhythm-e and others but they all seem to concentrate on it's looks and layout. What I'd like to see is the annoying little bugs and improvements in performance and features which have been in Rhythmbox for years but still haven't been fixed. I only use Rhythmbox for adding music to my mp3 players and mainly use Gmusicbrowser for playing music. Here's a not-exhaustive list of Rhythmbox annoyances and feature requests:


Rhythmbox can only have one music folder.

I've recently discovered this since my 250GB hard drive I store music is nearly full so I have some music on another hard drive but there's no option to add another folder, unlike my preferred player, Gmusicbrowser. This means if I want to add music to my Mp3 player I have to find another option. I could use sym-links but that's inelegant and a new user shouldn't have to do that either. (Apologies for the blurryness of the images, click for a better view, having trouble with Bloggers uploader) 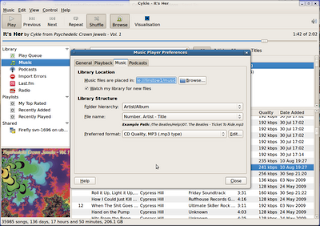 Compare that with Gmusicbrowser with multiple folders:

When scanning or rescanning the music folder, rhythmbox shows "Import Errors" with a red 'no entry' symbol, which makes it hard to ignore, but when you look at them they are mostly album covers. Gmusicbrowser has an option in preferences: "Do not add songs that can't be played" as you can see in the above screenshot.

Visible Columns has no option to change the order they appear.

Pretty much every opther player has the option to move the columns either by dragging them or in preferences. I want Artist, Title, Album, Time, Quality in that order!

There are some things Rhythmbox does do well like handling devices, it works better with mp3 players than Gmusicbrowser (which seems to have no support) and Banshee which has trouble with the SD card in my Sansa Fuze. Also I have recently found out Rhythmbox actually transcodes FLAC and ogg on-the-fly to iPods and accessing DAAP shares works well. But Rhythmbox's school report would read: "Has been essentially coasting for several years, has improved in some areas but needs to buckle up and get this sorted! Must do better."
Posted by Carl Draper at 10:34