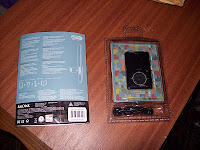 My main birthday present this year arrived early, it's a 4GB Sansa Fuze mp3 player. I requested a Fuze rather than the new Fuze+ for two reasons. For one you can pick up the 4GB version for around £35 through Amazon and I think it's a backward step removing the scroll-wheel for the Fuze+. My Fuze was nicely packaged in a plastic bubble-pack that arrived in a Jiffy bag that actually fitted through the letterbox, for once. I would have liked to have preserved the packaging a bit but I had to hack it about with scissors to free the little beauty. The back of the pack has the player's specs on and I noticed they don't even mention that it can play FLAC for some reason. It does actually play the usual mp3 and WMA, plus ogg and FLAC, which is another thing it has over an iPod. It's also a lot cheaper than a similar sized Nano and has a microSD card slot for expansion. I'm using my 8GB card that I had in my Sansa Clip+. 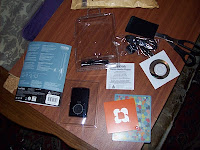 The player feels nice to hold, it's rubberised backside preventing it from slipping out of my hand and the 'piano black' finish to the upper surface looks nice but as usual attracts finger prints very easily. The iPod-like click-wheel is also rubberised. There is a slight rough plastic edge at the base of the player but that's not much to grumble about and it does feel more durable than the Clip+ The power-on slider is on the right-hand side of the player and you slide it down for the Hold function to prevent the buttons being pressed while it sits in your pocket. This is a 'physical' hold function that's much preferable to the smaller Sansa Clip+'s software hold function. I'm not quite sure why the headphone socket is on the bottom edge of the player but it's not much bother, I'll just have it upside down in my jacket pocket. 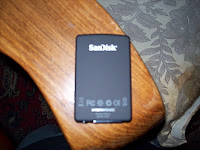 On turning on the player, I was greeted with a nice little graphic and it booted fast. I checked the firmware version in System -> Settings -> info and no surprises that it isn't the latest version. Upgrading firmware was easy, and much easier and quicker using the manual method rather than using the Windows only update tool. I followed the instructions on Sansa forum, just extract the two files into the root directory of the player, safely remove the player and wait while it updates, which took only a few seconds. The new firmware restricts the volume of the player (to comply with EU regulations) if you set it to English/EU region, so it's best to set the language to English but then set location to "rest of the world" so you can actually hear it properly in noisy areas! 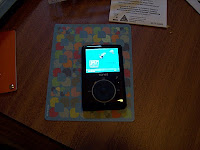 The user interface is rather nice looking, though it takes a little getting used to if you are switching from using an iPod as there are slight differences in navigation. Like the iPod, the Now Playing section shows the album cover and info and click the middle button to show just the album cover or info plus graphic etc. Another thing I like about the Fuze (and other Sansa players) is that you can delete tracks from the player interface and it can show you the info about the track - bitrate, filesize, format etc - which the iPod cannot. As with other Sansa players, the Fuze works best in MSC (mass storage device, like a USB stick) mode when using it with Linux, working well with Rhythmbox on Ubuntu. I find it's best to set the player to only use MSC mode rather than setting it to auto or MTP.

The sound quality is excellent, certainly as good as my iPod Mini, but like the iPod, you're best of ditching the little earbuds you get with it, to take advantage of it. It would be nice if it used a normal micro-USB connector rather than the proprietary connector, much like the iPods, but unlike my iPod's connector, this one stays in better thanks to release clips either side. Also I've seen them on Ebay for about £3 so it's handy to get a spare/replacement cable.

So far I'm very impressed with the Fuze, it's good value for money, particularly compared with an iPod Nano. I like it's interface, great sound quality, codec support, look and feel. As long as it's reliable and the battery life is usable (24hr while playing audio, according to the manual) I'll be happy.

I've installed alternative firmware - Rockbox - on my Fuze to achieve perfect gapless playback - and I've detailed that in a new blogpost.