I recently upgraded the hard drive on my Dell Latitude D505 from 30Gb to 60GB, so I thought i'd try Fedora 15. I had F14 on the 30GB and it worked OK but certain things were annoying me like not being able to get Hotot to work properly (I basically had to run it without installing it, which was awkward). Anyway, I installed Fedora 15 using the full DVD version, since it offers more options. After setting up user accounts, and first login I was expecting to login to a beautiful Gnome 3 desktop, however I'm now stuck with Gnome Fallback, as apparently my system isn't good enough for it. This I find strange since I should have hardware acceleration, and for playing video I do. I've found a number of things I miss from Gnome 2.
Here's what I miss from Gnome 2 and any fixes and workarounds I'm using.
1. Startup Applications missing from the Gnome menu.
Workaround: Ctrl + F2 and run 'gnome-session-properties' (I found this here) Edit: You can re-enable it using alacarte (yum install alacarte) and navigate to System, Preferences, and tick in the relevant box. Why this was disabled in the first place baffles me.
2. Unable to add applications or applets to the Gnome panels.
Workaround: Since I needed quick access to my favourite apps, I installed Cairo Dock with these instructions.
Although you have to add apps from within Cairo Dock by right clicking an item then 'Add' then 'Custom Launcher' since you can no longer drag and drop apps from the Gnome menu.
3. Poor quality fonts and there seems to be no appearance settings in the main menus.
There doesn't seem to be any way of changing the fonts in Googsystray, it looked so much better in Gnome2. Edit: I've found Gnome Tweak Tool (yum install gnome-tweak-tool) to change fonts, it can also change other things like icons, titlebars etc .
3. Seemingly no customisation options for the Login screen. I want to remove the user lists but can't even with gconf-editor.
4. Dialogue boxes open way too large and don't fit-to-screen which makes apply buttons and options off screen on my 1024x786 resolution desktop. Also some dialigue boxes keep popping up under the window I am using when they should appear on top.
Here is how my Gnome 3 desktop looks at the moment: 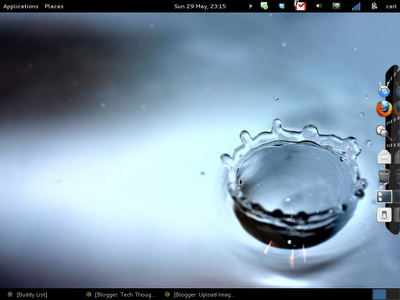 Some things I like about Fedora 15
1. Fast booting and shutting down - it shuts down in only a few seconds and boots pretty quick (although sometimes I think it does a fsck without notifying me).
2. Yum package manager seems to be slightly faster with less messing up, although it's still not as fast or as tidy as apt in Debian/Ubuntu.
3. Despite the usability problems, it does look good, it just needs plenty of bugfixes and smoothing of the rough edges. As usual, every Fedora release seems to be an alpha or beta for RHEL at the expense of the average home user's experience with the distro.
4. Some of the apps that didn't work in F14 now do work in F15 such as Hotot.
If you have any fixes or workarounds for the problems I have been having here then please do mention them in the comments below.


Update 05/06/11
I have wiped Fedora 15 out having tried that for awhile and thought I'd try out the iQunix re-mix of Ubuntu 11.0.4 (with Medibuntu repos already installed and a bare minimal Gnome desktop) and surprisingly it actually works without any modifications to GRUB. The most annoying thing about Gnome3, that was the final straw, was the wallpaper kept changing to 'scale' every time I switched desktops, every time I tried to change it, it would change back on the next switch or next login - highly frustrating! Oh and also it's impossible to disable the screensaver, you have to uninstall it!

Coincidently, i have already just read about your distro, looks good, but I'm waiting for a version based on Fedora 15

A new feature is available. MPD-Web-Remote is now included in the phpMpReloaded package. This client comes in two flavours: (1) for the use in windows mobile devices usually supported by opera mobile [see http://www.opera.com/mobile/] and (2) it goes perfectly with IPhones and IPads as it even uses the correct style, see the screenshots.

How do you get the system and places menus to appear?They are checked in alacarte

There is no checkbox on preferences menu in alacarte. How do I make it visible?

System and places were already there in Fallback Mode, so I'm not sure why they are not there for you.