My wife was looking for something a little bigger than her phone for social media, light gaming and writing. She doesn’t own a laptop and decided a tablet would be a good option. Looking around, new tablets are quite pricey and the lower end ones offered terrible specs, so we started looking at local ads and found a Google Nexus 7 tablet locally at a good price, it is the second generation 2013 model. 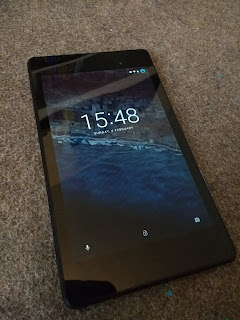 It features a 7" screen, quad core processor, 2GB RAM, 16GB internal storage, no SD card slot, a 5mpx camera and a 1.2mpx front facing camera. It shipped with Android 4.3 and was updated through to Android 6.0.1. It might not sound too impressive, but there are a lot of new devices with less specs - some even now ship with older versions of Android than that. A quick look over the device and it’s build quality can't be beaten. It has a good weight and overall feel in the hand is great. However, the key question is how does this once high end tablet from 2013, perform almost 5 years on in 2018. I have to say I was a little dubious, but after a few minutes of setting it up and playing around with it, this tablet screams along. The 7” screen is beautifully bright and crystal clear even at different viewing angles, helped by its 323ppi. You can tell this certainly wasn't a budget device. 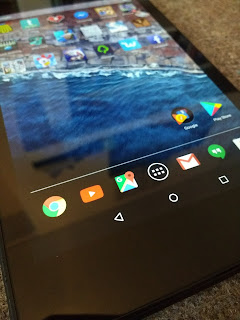 Navigating around the device is slick and fast. While the quad core may not be top end these days, its no slouch and certainly helped by the 2GB of RAM. The OS navigates fast, general apps have no lag such as FaceBook, Messenger and Google Docs. My wife loaded her selection of games - nothing heavy - HayDay and card games etc and these performed fantastically. The 16GB internal storage and no MicroSD slot may be limiting to some, but she has never filled her phone so it shouldn’t be a problem. The cameras are fairly good. It is one area older devices tend to fail. The 5mpx autofocus on the back is great, but it has no flash so low light shots can be a bit grainy. The front 1.2mpx camera is really just a selfie or video call camera and it suffices for that purpose. Sound is good for a tablet. YouTube videos came through loud and with as decent audio as you expect from an 8mm piece of tech. Things alway improve when you plug in a good pair of earphones and the sound performance was great. Battery life is also impressive. At 3950mAh it may not match some of the 6000mAh behemoths in some of the Samsung devices, but its smaller screen certainly helps and should keep you going for a few days of heavy use. A mobile phones battery consumption is heavily taken by having a SIM card in connected to a phone/data signal all the time, remove this feature in a tablet and the battery lasts a lot longer.
I have had zero issues with this Nexus 7 and my wife hasn’t complained about anything. It is a solid device which still outpowers even modern tablets with the beauty of having a high class quality screen. If I was to pick one downside to it, it would be the placement of the volume and power buttons. They are not directly flat on the side, but follow on the curve of the back, which can make them a little difficult to press and you find yourself fumbling around sometimes. 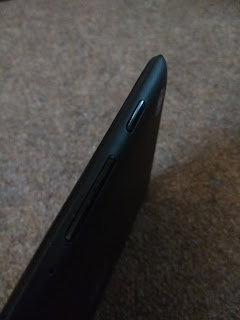 If you are looking for a low cost tablet I highly recommend going for an older high end model rather than a new low budget offering. The Nexus 7 2013 model is a superb example and superb device. 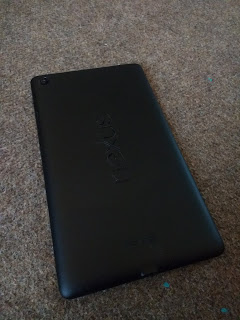 Still using mine which was purchased in 2013! I refuse to part with it. Unlocked and rooted it hums along with Lineage ROM of Android 7.1.2 and mods from Xposed framework.

Still using mine which was purchased in 2013! I refuse to part with it. Unlocked and rooted it hums along with Lineage ROM of Android 7.1.2 and mods from Xposed framework.

I got one 3 years , and then one for my wife 2 years ago. Both still run like they were just released and can do anything you throw at it. Can't say that about most 5 year old devices.