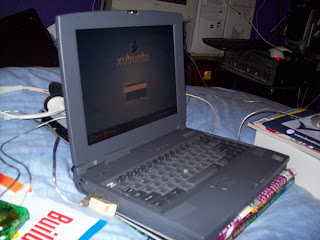 About a year ago, I was in need of a laptop, and with a meagre budget, I bought two ancient Toshiba Tecra 8000 laptops for £30. Both have 233MHz Pentium 2 CPUs and one came with 64MB of ram, the other had 32MB. I decided to use one and keep the other for spares as they had only one 4GB hard drive, battery and cdrom between them. I transferred the ram, battery, HDD and cdrom into the best one, as one had broken lid-catch. Despite not working, I had to keep the battery as it forms part of the underside and front of the machine, so it's just dead-weight really!

The hard drive had Windows 98 installed which I used, until I was fed up with it's poor USB support and buggy nature. It did boot quickly, but was also let down by lack of security - pressing escape at the login bypassed it! Perhaps this was rectified at some point but I wanted something better. I then dabbled with Damn Small Linux, Puppy Linux and other small distros, but I could not get the Yamaha on-board sound or wireless working with my Ralink USB adapter. So I installed Windows 2000, which was an improvement over 98 but took up a lot of space without additional programs, and i really wanted Linux on it.

Ubuntu 7.10 arrived in late 2007 with is much improved over previous versions great wireless support. I installed Kubuntu on my desktop machine on November 5th (my birthday!) and I am writing this on it now, having since been a Gnome convert, 8.04 has just come out and I will update it soon. Anyway, I installed Xubuntu on my laptop in dual boot with Windows, sharing half the hard drive. XFCE is a great desktop environment, just enough Gnome features without being so heavy on resources. I've been adding programs, being careful to choose lightweight programs. For a media player I have chosen Audacious which is like an updated XMMS (like a linux version of Winamp), it has a nice on-screen display plugin and plays so smoothly on such a low spec machine. I use Firefox with Flashblock installed as Flash tends to cripple old machines. I recently deleted Windows off the hard drive using Gparted and moved /home onto the fresh partition using a tutorial I found here. After all, i can do everything i want/need with Linux now so I hardly need Windows at all!
Posted by Carl Draper at 12:32 No comments:

I recently had a permissions problem on Ubuntu, caused by an aborted attempt at using Remastersys backup software which I don't think I will ever use again judging by the mess it created. Ha! to think I was using it to protect my sacred install!

It all meant I had to create a new user account and copy everything across. I did this once logged into the new user account. Annoyingly my other storage partitions (under /media) had to have their permissions changed aswell, I did this by loading konqueror as root (rather than using sudo konqueror as I've found that it wouldn't always change permissions underlying directories for some reason and was slow. It was still slow changing permissions on gigs of files.

Anyway, there was a silver lining to this story too. As i only copied important files and directories such as .evolution for my emails and .bash_history so i don't have to keep trying to remember obscure commands in terminals. Secondly I decided to start Firefox from fresh, well almost fresh, as it had become slow and bloated from many extensions and cache detritus etc. I used the FEBE extension to restore passwords and selected extensions from my old firefox. It runs a lot quicker now :)

FEBE
Foxmarks (for synchronising bookmarks between browsers)
Delicious Bookmarks (similar but more accessible)
Download Embedded (for vids)
Download Statusbar (better than downloads in a separate window)
Flashblock (essential for slow connections)
Stumbleupon (staves off boredom)
Titlesave (save page as the pages title)
Video Download
Youtube IT
Adblock plus
Posted by Carl Draper at 20:20 No comments: