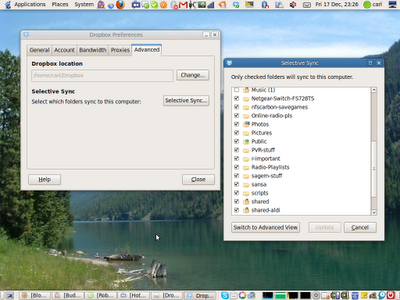 The excellent cross-platform folder syncing app Dropbox has just reached version 1.0 and has some great new features, chief among them being Selective Sync. This means that you can select which folders you want to sync on each machine, handy for devices that are limited on space or for folders you don't want to sync to your work or home computer. On Ubuntu I found out, thanks to Dropbox Support on Twitter, that Dropbox version is different to the nautilus-dropbox version. To get it to upgrade on Ubuntu, I needed to download a replacement files to replace the ".dropbox-dist" hidden folder (download the 32 bit or 64 bit version). I had to extract the package in a temporary folder then move it to /home/username/ replacing the files already there. According to Webupd8 You could also delete or move that folder and Dropbox should download the upgrade itself.
Posted by Carl Draper at 15:08 No comments: