Microsoft will announce Windows 8′s successor, codename “Threshold”, at their annual build conference in April this year, and most likely release it as Windows 9 in April 2015.

First a little history lesson. After the poorly received Vista and popular Windows 7, and after having missed the smartphone and tablet boom of the Apple iPad and Google’s Android systems, Microsoft decided to muscle in on the smartphone and tablet market with Windows RT and Phone 8 operating systems. But Microsoft made the big mistake of forcing the Metro (“modern”) interface in Windows 8 onto every platform, including non-touchscreen desktop and laptop computers. This has confused and frustrated a lot of users, no matter how many expensive TV adverts Microsoft put out. Microsoft Surface and Windows Phones have not made much of a dent either.

First Microsoft already has a  minor fix for 8 called 8.1, which merely brings back the Start button as well as some other fixes. This is a mistake since users don’t only miss the Start button, but actually miss the Start Menu too. As I have said before, switching from the touch-friendly Metro to the not very touch friendly desktop and back again feels awkward. Doing that every time I want to search for an application gets old fast! Both Apple and Google have sensibly, generally, kept desktop and mobile devices on separate operating systems (OSX and iOS, ChromeOS and Android) although Android seems to have jumped to all-in-one desktops at CES2014. However Android with it’s many OEMs, is far more flexible than Windows when it comes to custom interfaces. With the right skin, Android could make some inroads into all-in-one or laptop markets.

As Microsoft blogger Paul Thurrott states here, Windows 9 “needs to be everything that Windows 8 is not.” Although nothing has been set in stone yet, it will most likely have a windowed version of Metro that will work better on the desktop. This will supposedly make Metro apps, however few and little-used they are, integrate better into the desktop.

Microsoft’s backtracking fix to Windows basically makes Windows 8/8.1 the new Vista/SP1, but it might be too late for Windows to stay relevant for long. Google Chromebooks have outsold Macbooks in the US, and iPads are still leading tablet sales in the US. With Android dominating smartphones worldwide and making fast inroads into desktops and hybrid laptops, Microsoft Windows seems to becoming increasingly irrelevant. As Thrurrott put it, “Windows 8 has set back Microsoft, and Windows, by years, and possibly for good.” With many home users only needing browser based web apps and social networking sites, a Chromebook or Android desktop/laptop/tablet could be all they need. Even in the usually Windows dominant gaming market, Steam boxes that run Valve’s Linux-based SteamOS could eventually replace Windows once enough games are available in Steam for Linux. In the corporate world, most businesses will probably stick with the familiar Windows 7 until mainstream support for it ends in January 2015 while planning a switch away from Windows to a more secure, flexible platform, be that Chromebook and server based apps, Ubuntu or other desktop Linux, Android or OSX. One thing’s for sure, Microsoft Windows has a treacherous rocky road ahead.

Google Notifier Has Finally Been Retired 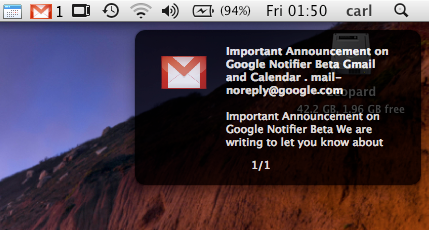 Although Google had warned on the 10th January earlier this year, Google Notifier Beta had still been working fine for some until a day or so ago. The email stated that “Starting on January 31, 2014, Google Notifier Beta will no longer be supported, meaning the app will no longer show recent emails and calendar events.” Google now recommends enabling Desktop Notifications in Gmail and Calendar or installing the Gmail Checker Chrome app, though the minority who still use PowerPC Macs (such as myself) will be out of luck since Chrome is of course Intel only which is kind of a shame really. 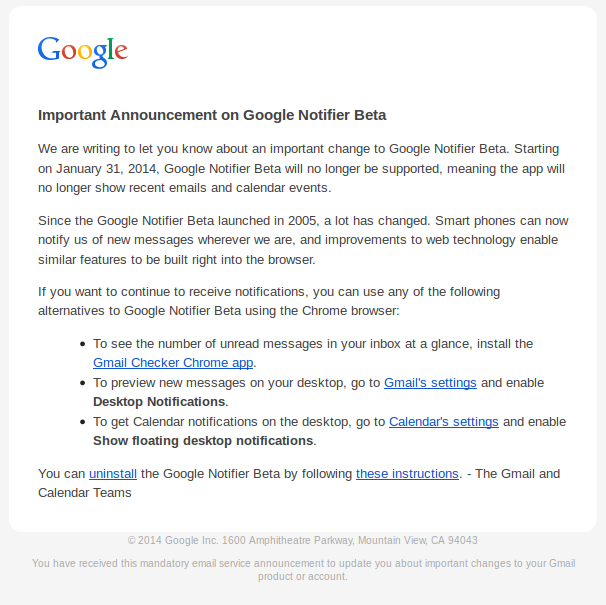