Having found a nice combination of icons and themes for Gnome that I like, it's mildly annoying when apps that run as root (such as Synaptic) look ugly because they use a very plain theme. I've been looking for this for awhile and stumbled across this solution by the user "FuturePilot" in an old thread in the Ubuntu forums:

This is a nice simple solution to the problem, so now Synaptic fits in with my desktop. My theme consists of Bluman-Clearlooks controls, Clearlooks window borders, and Reblumanity icons. 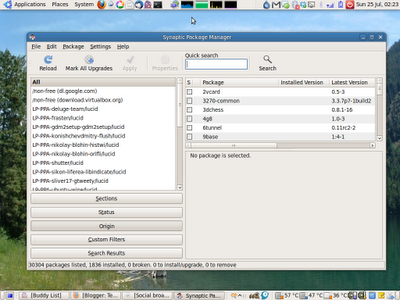 For a long while Linux seemed a bit lacking in good audio apps, but it's improved so much in a short space of time and it's getting better all the time. Here I've gathered the necessary apps to get your music ripped, tagged, edited and played.

I've trawled the net for a good CD ripper on Linux and they all seem to be not quite what I want. Basically, I'd like a CDex for Linux. CDex sort of works under Wine but has trouble with the DVD drive sometimes locking it for other apps once I've closed it. I've found Audex to be the closest to it, plus it has album art downloading which CDex hasn't got. It is a KDE app so theres some KDE dependancies, but it looks and works fine on the Gnome desktop. 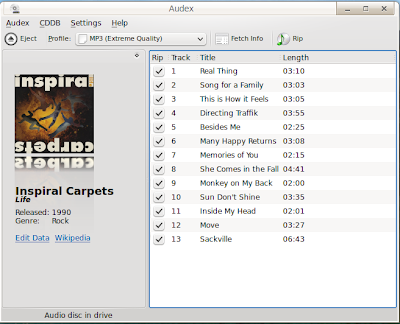 Audex is available from the Ubuntu repositories or from their site as source code.

This is a relatively new app but it's quite well featured. It's loosely based on the Mp3tag available on Windows it is a good Linux alternative to it. I really like the Filename --> Tag and Tag --> Filename conversion it shares with Mp3tag, which other Linux apps generally lack. Another good conversion is it's case conversion which Mp3tag doesn't have. It's almost there, I only occasionally find my self going back to Mp3tag in Wine. 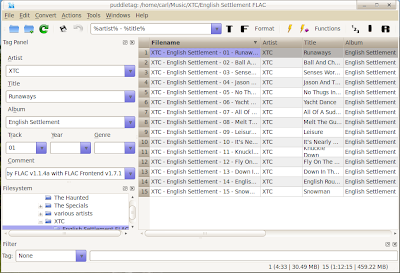 This really needs no introduction, it's probably the best free audio editor on any OS! It does look a bit different here due to my Ubuntu theme. 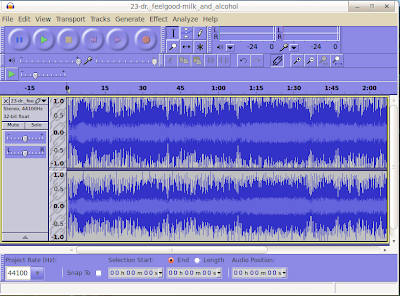 It's available from the Ubuntu repositories and from the Audacity site

Also consider: Traverso, LMMS, amongst others.

This is great GUI (Graphical User Interface) to the commandline mp3gain, vorbisgain and aacgain volume normalisation tools. Again, I used to use the Windows version of Mp3gain in Wine but having found EasyMP3Gain in the Ubuntu repos, I've switched and found it a lot quicker! 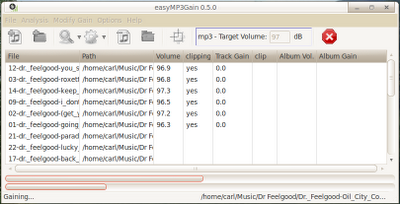 For a long time I kept switching between various music players on Linux trying to find one that worked best for me. I used to be an Amarok fan before Amarok 2 came along, even by then it didn't really fit in with the Gnome desktop I'd switched to. I switched to Gnome having had so much trouble with Kubuntu, it always felt like Ubuntu's neglected brother. Having been recommended by a fellow Blogger user, Apocrypha, I tried Gmusicbrowser, and have found it to be lighter but feature-rich. It has good tagging support like Foobar on Windows and I like it's tray pop-up that gives you easy access to the controls. Unlike Rhythmbox, you can just hover over the icon. And the full controls are there, rather than just play/pause in Rhythmbox. The only thing Gmusicbrowser could do with is better USB device support. 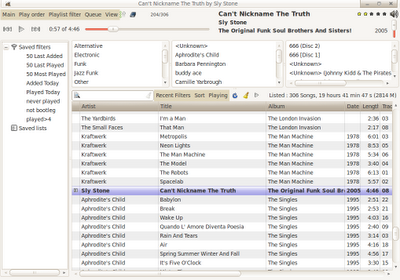 Gmusicbrowser is available to install from the Ubuntu repos.

Also consider: Rhythmbox, Banshee, Foobar under Wine, and various others, just try them out, it costs you nothing but time!


And there we go, from ripped to playing, I think we have it covered!