I’ve been an iPhone user for many years, but when my kids wanted decent smartphones we looked around and was pointed in the direction of Motorola - not a name synonymous with decent phones these days. However the last few years their Moto range has taken the Android world by storm.

I bought my son a Moto G third generation last year and it blew me away. My daughter then got a Moto G second generation and we were just as impressed.. These might be mid range handsets, but they offer serious power that can even rival high end handsets.

So when my wife wanted to switch from iPhone - there was only one manufacturer to look at, Motorola. She opted for the Moto G fourth generation.

Unboxing revealed an amazing looking handset. For a handset that can be bought for £150 brand new SIM free you get a lot of hardware. While the G3 wasn’t a massive leap over the G2, the G4 is a huge improvement over its predecessor.

Build
They might be plastic, but Motorola make good solid handsets. The G4 is no exception. It feels strong and sturdy. Its removable back does seem a little flimsy, peeling it off I had a brief worry it would break. The back has a rubbery feel which great for grip. 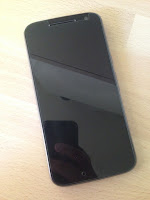 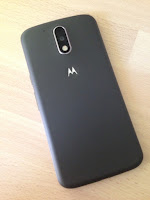 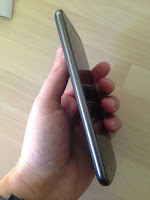 It is a large phone - especially when you are used to an iPhone 5 or SE with their 4” screen - but the handset fits neatly in the hand. It is thinner than previous models and despite its size feels like it weighs less, although officially both weigh 155g.

The back features the camera, flash and the Moto dimple. The bottom features the MicroUSB port for charging, and connecting to a computer, and the right side has the power/lock button which has a textured feel and also the volume rocker. The top has the headphone socket.

Screen
The 5.5” screen is superb. It is large and very bright and the 401ppi makes it very crisp. Colours look vibrant and viewing angles are great. One thing I have found on all Moto is the screen is very sensitive to touch, which takes a little getting used to. 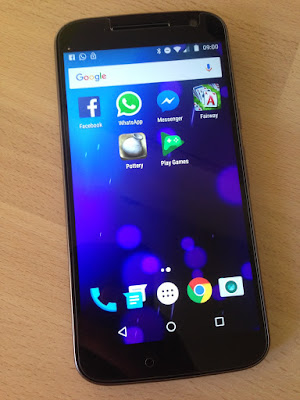 Cameras
The G4 has the same 13MP camera and 5MP front camera as its predecessor although the front camera now features a ‘selfie flash’ mode similar to the Galaxy S7 and iPhone SE. It shows a white screen illuminating your face in low light. 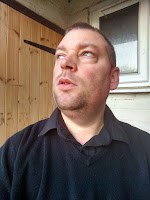 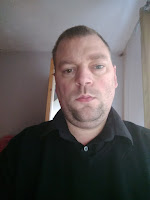 Call/Music
It is a phone primarily, so call quality is important. This handset has the clearest and loudest call quality I have ever experienced on a phone. I live in a poor signal area and still had no issues even indoors.

Music playback was also as good as you get on a phone. I’m not a fan of banging out choons on a tiny phone speaker - no matter what the manufacturer claims - but it performed decently and when hooked to a Bluetooth speaker it was superb. Listening over headphones also produced very loud sound - something I like from a phone.

Performance
This handset is no slouch. Everything is a dream to use on it. Surfing the web, Facebook, Twitter, listening to music, gaming and even navigating the OS, this Moto is amazingly fast.

Battery
It packs in a 3000mAh non-removable battery. Out of the box it was almost fully charged and setting it up, performing the 6.0.1 update and installing her apps made no dent in the battery. The following day, she continued to play with it, made calls and listen to music connected to a bluetooth speaker and by 10pm it still had over 70% battery left. That is very impressive.

OS
As with other Moto handsets, Motorola offer a nearly vanilla Android experience with a few Motorola apps thrown in. It shipped with 6.0 Marshmallow and is due 7.0 Nougat in the near future. The Android world generally falls short of the massive four year of updates you get in the Apple world - however you are talking about a phone that is a quarter of the price.

Conclusion
I was already seriously impressed with the Moto G range - and this large, elegant G4 has seriously turned my head. I can’t fault it in any way.

My ageing iPhone is in need of updating and for the first time I am seriously swaying away from iPhone.