The Original XBox... A Beautiful Beast

About three months ago I bought an original XBox. I have wanted one for a while and one came up for sale locally. £20 for the console, S controller and 9 games was too good a bargain to give up. 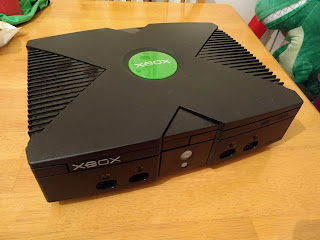 I had an original XBox about 10 years ago, then my kids took it over and it got upgraded to an XBox 360 - which I had no interest in. Since then I have been firmly in the Sony camp - despite being a Sega diehard.

A sixth generation console, the original XBox was Microsofts first step into the console business - besides its brief pairing with the Sega Dreamcast offering Windows CE on discs for added functionality. It competed with the Sony Playstation 2, Nintendo GameCube and the Sega Dreamcast. The XBox was by far the most technologically advanced.

It is basically PC hardware in a fancy case and custom software, powered by a 733Mhz Pentium 3 processor, 64MB RAM, 8/10GB hard drive, DVD drive, built in ethernet and nVidia graphics chip. This is a large and heavy device.

It was the first console to feature a built in hard drive. However, it isn't for installing games on - like modern consoles, it is for game saves and ripping audio to. 8GB (or 10GB in later models) is plenty for even the biggest gamer and could hold a lot of music as well.

Since buying this XBox I haven’t touched any of my other games devices. There is something amazing about using a simple and dedicated gaming machine. Modern consoles might offer fancier graphics, but they come with a lot of baggage, from having to install games, waiting for large system or games updates and charging wireless controllers.

With the XBox, you plug in a controller, turn it on, put in a disc and you are ready to play in seconds. For a console that is almost 20 years old, the graphics on it stand up very well, even though it doesn’t feature HD graphics.

I have been rocking a selection of games, which is growing very quickly.

Halo is amazing - which I have already completed, Halo 2 is even more fantastic and I am loving classics like Project Gotham Racing 2, Outrun 2, Midtown Madness 3 (an absolute masterpiece of a game) Dead Or Alive 3, XIII, S.W.A.T, Soldier Of Fortune 2 Double Helix, Doom 3 and Doom 3 Resurrection Of Evil (which was an expansion pack for Doom 3, but was released as a stand alone game for the XBox).

As far as I know there were only about a thousand games released for this console, which had a five year life and despite it being fantastic, it doesn’t have the fan base of other consoles. Only 24 million units were sold worldwide which is tiny compared to the 155 million for Playstation 2, however it still outsold the GameCube at 21 million and the Dreamcast at 9 million.

Accessories are expensive, but games are very cheap, however secondhand shops only ever have a few games - yet they have piles of PS2 games.

I am absolutely in love with this games machine. It might be old, it might be heavy and you might have to sit with a controller wire trailing to your console - but the game experience is fantastic.

As with all older consoles they do develop faults. Luckily mine seems to be fault free currently, with the exception of a DVD drawer that sticks occasionally. I have removed the top casing and everything looks tidy in there and it is a 1.6 revision, so one of the later ones. To keep it going I’m going to strip it down and replace the thermal paste on the processor and graphics chip, just to ensure it runs cooler and nicer for longer. 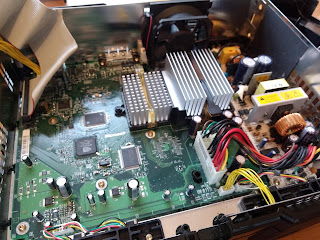 I may not be a Microsoft fan, actually that is an understatement. I own a Mac, cannot stand Windows and detest the XBox 360 and XBox One, but Microsoft got it right with the original XBox. It is an awesome games machine and lead the way for online gaming.