I love Motorola phones. Since leaving the iOS camp two years ago, our house has become full of them and my latest purchase is a Moto Z Play. This is a first gen one released in 2016.

It is the only version of the original Z range that has a headphone socket (essential to me), which is located on the bottom next to the USB-C socket. The right side houses the very tiny volume and power buttons. The top holds the pull out SIM (dual SIM in my case) and MicroSD card tray. 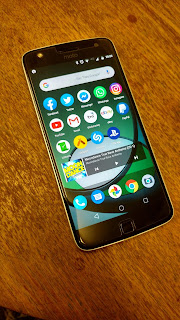 The back features a shiny naked glass back. The Z range takes advantage of the Moto Mods accessories which includes a snap on interchangeable back cover. This would cover the Moto Mod pin connector, protect the back of the phone and ensures the camera doesn’t stick out. 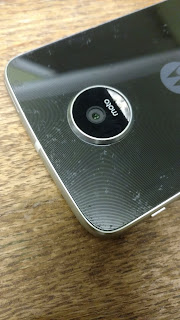 This is my first experience of USB-C, and what an improvement it is. The socket and cable just seem a stronger fit over Micro USB.

A new phone always feels special, but I was so surprised how gorgeous this Moto Z Play looks and feels. The large screen looks great and the metal frame around the edges of the phone give it a solid feel. The naked glass back seems a bit vulnerable - something I will have to address with a Moto Mod Shell. It is a very slippery phone to handle. Even the metal side make it slide in your hand. 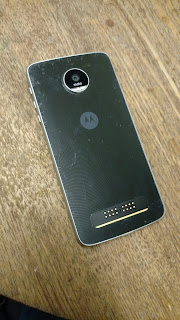 The volume buttons and power/lock button on the side are very small and will take a little getting used to.

This phone has a massive 3510mAh internal battery and boy does it perform. I got 2.5 days use out of a single charge. I haven’t had the phone long but it has broken that ‘charge every night’ cycle I have been used to.

The 2.0Ghz Octa Core processor and 3GB RAM give this phone superb general performance. The whole phone is a joy to use and amazingly quick. I certainly noticed a huge performance increase from the Hexa-Core processing in my Moto X Style.

The 5.5” screen is very bright and crisp, even when the brightness is turned down.

As a phone it works perfectly and call quality was superb. It has a single speaker on the front which has decent sound - as decent as you get on a phone. The Z Play is the only Z range phone that kept the headphone socket, something I need and listening to music through it was great. I listen to a lot of music and bluetooth audio just doesn’t cut it for me.

The main camera is a 16mp that takes great photos in the right light but it can let in a little too much white at times. The dual-LED dual-tone flash does a good job of low light areas. Without a shell on, the camera module sticks out and means the phone doesn’t sit flat when laid down.

The front camera is a 5mpx 1080p ’selfie’ camera, which does its job and is great for videos, which I take a lot of for uploading online.

It seems to take more of a cue from newer Motos. It doesn't have double tap power button to open the camera but a twist of the phone does. The Motorola camera app has the same layout as the G4.

I would never go back to a phone with less than 32GB internal storage. The breathing room this gives you and the amount of apps you can install is fantastic. The addition of a MicroSD slot to house all my music is superb - this is something that put me off looking at a Pixel.

This is my first experience of Oreo (my two previous phones stopped at Nougat). It certainly is fast and has a few changes over Nougat that I am still getting used to. It houses more app icons on screen, the swipe up to open the app drawer and the soft press on some app icons will give you shortcuts within these apps before opening it. I love the new incoming call screen too, it is much neater looking.

Motorola phones are praised for their near stock Android, but it is nice to have a few additional tweaks. The twist to activate camera and chop action to turn on the flash light are great as well as the way the screen will wake with a simple wave of the hand over it. 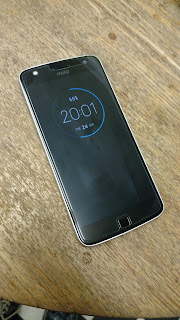 OK, so this might not be a new thing but it is the first time I have had one. I never saw the appeal of one, but within hours of using it, it has made unlocking the phone and signing in to apps so much easier. It is a fantastic addition.

I am loving this new (to me) Moto. Another fantastic phone with near stock Android and insane battery life. The design and look of it is superb, with my only concerns being the slippery feel to it.

Motorola really seem to pack a lot in to their phones for the price. Even though this phone is a few years old, it doesn’t feel like it. It still packs a punch and outperforms anything I have used or seen recently.