Not long ago, the screen cable on my 2 year old HP Chromebook 14 went flakey, so I decided to get a new Chromebook before attempting to repair the old one. My requirements were 4GB RAM, HD screen and 32GB SSD, and the Acer 14 (CB3-431-C5CQ) fitted the bill. I managed to get one recently when it was on offer. I was immediately impressed by the build quality of the metal body and beautiful Full HD screen. There's no obvious flexing of the body, it feels fairly durable for the price, only time and usage will tell.  And even though the Acer has a metal body it is actually a bit lighter at 1.54kg instead of 1.69kg on the HP 14. The lid actually folds back right flat, I noticed sometimes I accidentally flicked it into that position when picking it up with the lid open, but it does it no harm. One slight feature lacking is there's no SD card slot which is a shame as I used it a lot on my old HP. It has 2 USB 3.0 ports on the left-hand side and the power socket on the right-hand side. 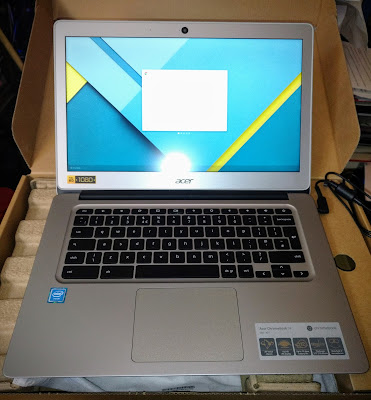 Setting up Chromebooks is pretty simple and painless. The Acer checked and installed an update as soon as put in my wireless details, though later on, after I had finished setup, it also downloaded yet another update in the background and is now running the latest Chrome OS version. Anyway, I put in my account details and it installed all my add-ons and synced bookmarks, passwords etc 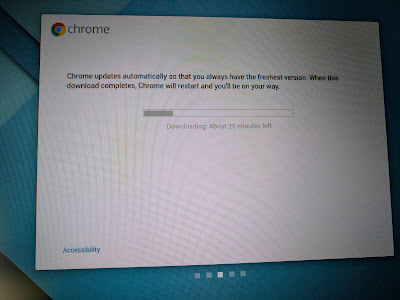 The 14 inch 1080P semi-reflective display is amazing for such a cheap device, and big step up from the 1366x768 display on my old Chromebook. I was a little surprised that it was set to 1536x864 and not already set to 1080P but that was quickly rectified in settings. These days there are far too many 14/15 inch laptops with 1366x768 resolution screens, 1080P should be the minimum. I know some reviews have criticised  it for a lack of brightness but I found it's bright enough for me, and I've kept it at about 50% brightness most of the time. 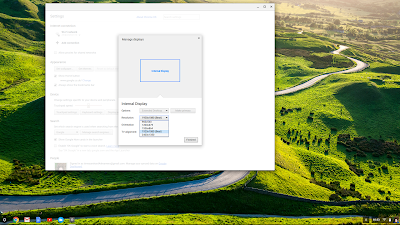 I then claimed another 100GB free Google Drive storage (for 2 years) on the rewards page. 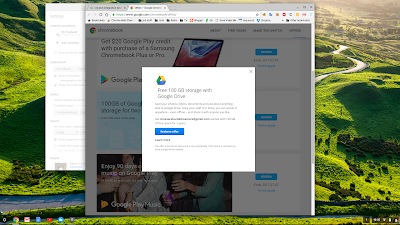 The Acer 14 feels noticeably quicker than my old HP, not surprisingly with a newer generation quad core 1.6 GHz (up to 2.24 GHz with Turbo Boost) N3160 Celeron CPU compared to the 1.4Ghz 2955U dual core CPU in the old HP 14. It really does feel very snappy, taking on much more than I could ever do with the HP. Battery life from the 3-cell Li-Po 3920 mAh battery is a claimed 12 hours compared to 8 hours on the old HP, despite being thinner. It is hard to measure battery life when I tend to just close the lid and put it down and pick it up all day, but I have been charging it less than the HP. 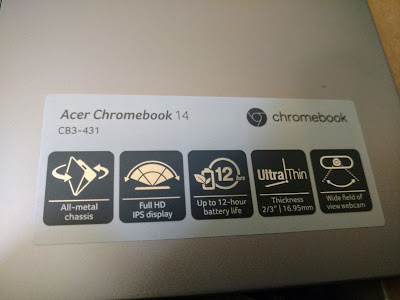 And one last thing, the Acer CB3 will officially get Android apps at some point, (the HP is too old to get them) it is possible to get them with some dev mode noodling, but I would rather wait until they arrive for it in the Stable Chrome OS channel, I look forward to trying that out.

Overall this is a great spec Chromebook for the price and a decent upgrade from my old HP Chromebook 14. It's amazing how Chromebooks have improved in a short space of time. The only slight downside is this does not have user-replaceable SSD, and no SD slot, but at least this came with a 32GB in the first place. It is very quick and the screen is so much brighter and more vivid. It feels a bit more solid so hopefully will last me a good while. 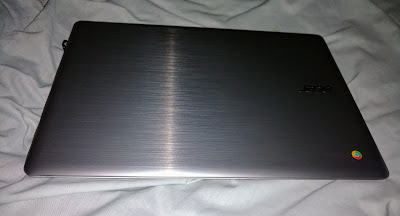