Happy birthday to me, happy birthday to me....yes it's my birthday and this HTC Hero is my main present, it's also my first proper smartphone (my previous phone being a Samsung Monte S5620) and it's my first Android phone. Don't worry, I've scheduled this post and I'm really out having fun and hopefully I'm fairly merry right about now! Oh and sorry about the quality of the photo, took it in low light on my Monte. 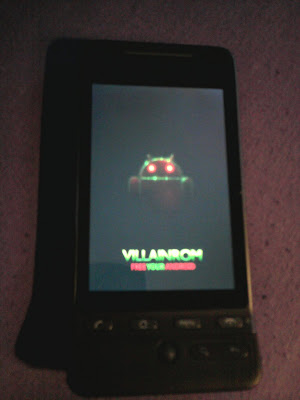 I've actually had it for a week or so now and I love it! When I first got it, I played with the stock HTC version of Android for a bit, but found it a bit limiting settings-wise and me being a tinkerer and Linux user, I wanted to have a good rummage and tweak! I tried a few different alternative firmwares starting with Cyanogenmod and finally settled on VillainROM. It's based on Cyan but has the Google apps included by default and has some extra tweaks, including LauncherPro installed by default. The only thing I miss from the original firmware is part of HTC Sense, that nice weather widget that shows drops of rain and a wiper when it rains!

Here's what I love about my Android phone so far:

Tomdroid: Android version of Tomboy that I use on Ubuntu. Although you cannot edit the notes on the phone, it is still handy to have access to them.

TaskOS: Shopping list type app that syncs with Google Tasks. This along with the Google Calendar app have replaced my Palm Tungsten for keeping appointments, shopping list etc.

Cubed: Music player that has a great coverflow-style view option for flicking through albums, scrobbling to Last.fm (via either Scrobble Droid or Simple Last.fm Scrobbler) and good album art support. It can use local or embedded art or download it. And of course, like a lot of Android players it supports Ogg and FLAC aswell as the usual Mp3 and AAC. I prefer not to use AAC as it seems it's tags are not supported on Android. I also quite like the Songbird Android app but it doesn't have any way to manually add or change album art.

And many more!
Google+, Reddit Mobile, Overlook Fing (awesome network info tool), ConnectBot and sshdroid ssh client and server, Wifi Analyzer, Maverick (another wifi tool for wardriving), Android VNC, SCDB (warns of speed cameras), ElectroDroid (gives pin outs for electrical cables, conversion tools etc). These are just some of the apps I have installed, you can see all of them on AppBrain.

All the apps I've listed here are all free on the Android Market. If you have any suggestions of interesting and useful apps please feel free to mention them in the comments.


Update 01/12/11
I've replaced LauncherPro, which comes with Villainrom, and handles the desktop, with GoLauncher as it has nicer options and seems more responsive and less inclined to crash. I've also just installed Beautiful Widgets (which can be had from GetJar for free) as it has clock and weather widgets much like HTC Sense has.
Posted by Carl Draper at 17:00 No comments: