Motorola returned to the smartphone world with a storm in 2013 after Google bought their mobile side in 2012. Launching three new lines they were instantly catapulted in to the Android limelight.

The E range is budget, the G range is mid way and the X, and later joined by the Z, are the high end. The G range stood out as a happy medium with Motorola packing some serious punch into these compared to its competitors.

I have had the opportunity to use all four handsets in the G range. In fact all four have been in our house over the past few weeks, so I am comparing them and how they perform in 2017.

All Moto G handsets follow a similar minimal look. The back has the camera and flash and trademark dimple, the top has the headphone socket, the bottom the MicroUSB socket for charging and data transfer. The right side has the power/lock button as well as the volume rocker.

The original Moto G - released in 2013 - is the smallest of all, featuring a 4.5” screen and no MicroSD card slot. A heavy but well built device. The lack of MicroSD card slot is a big turn off for me as the built in 8GB is too limiting without expandability - although also available in 16GB version. 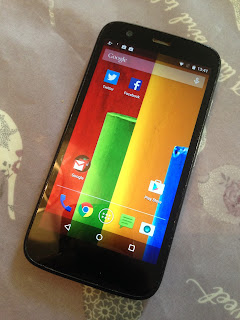 It can handle social media and YouTube videos without issues and even gaming is possible due to its quad core processor and 1GB RAM - but space will be your main concern. It shipped with Android 4.3 Jelly Bean and received 5.0 Lollipop which it runs very well. As a four year old handset it still performs very well for its intended tasks - but lacks the new look OS, which had a major visual overhaul in Marshmallow.

Later on, variants were released that included 4G and MicroSD card slots - although I have never seen any of these.

The second generation Moto G - released in 2014 - upped the stakes, growing to a 5” screen and adding an MicroSD card slot. It has a more plastic feel, which gives it a lighter feel without making it feel cheap. 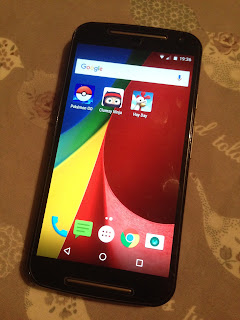 The bigger screen, drastically improved cameras and inclusion of a MicroSD card slot put it at a huge advantage over its predecessor - despite both having the same CPU and GPU. This model was well received by the media and offered serious value for money.

It still performs superbly today, running Android 6.0 Marshmallow (shipping with 4.4.4 KitKat) and easily keeps up with other newer handsets on the market. My daughter has this model and she uses it for light gaming, messaging and music with no issues. It really is a joy to use and doesn't feel like a three year old phone. The battery is easily as good as new phones and she can stretch hers for days. An interesting bonus too is that the G2 has stereo front speakers - producing superb sound for a phone (as far as I know, the only version of the G range to feature them). Later on, a variant, the XT1072, with 4G support was released.

The third generation Moto G - released in 2015 - took the same design and tweaked it slightly. The back is the big give away featuring a textured back casing for easier grip. The cameras were upped once again offering a very capable 13mpx rear camera offering 1080p videos (over the 720p of previous G handsets) and dual LED flash, the front camera is taken to 5mpx. A slightly better CPU and GPU were introduced and it also added 4G/LTE in all models. 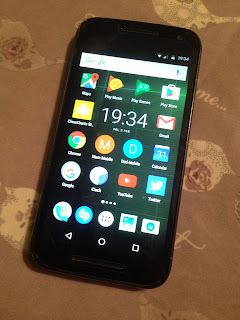 However the performance difference between the second generation and third generation is barely noticeable. My son has the third generation and he loves it. He plays a lot of games and never once complains about speed or delays, the only issue he has is the 8GB internal storage which can limit your apps even though Marshmallow introduced combined storage for internal and SD, it doesn’t work just as it should. There is was a 16GB model which had 2GB of RAM but I am not sure if it was released in the UK. (Editors note: the 16GB/2GB variant only seems to have been sold on Amazon UK, and I too have never seen one in the wild).

The battery size was increased by over 20%, which makes an already decent battery life even better and it features IPX7 water resistance which means it can be submerged in water - although I have never wanted to test it.

One final addition over its older brother is the ability to wake the phone just by picking it up. Motion triggers the screen to wake, which is a handy feature.

The fourth generation Moto G - released in 2016 - makes further leaps over the previous version, upping the screen even further to 5.5” (1080P instead of 720P in the previous generations) and cramming in impressive Octa Core processors, 2GB RAM but did keep the same camera specs as the G3. The device is splash-proof rather than water resistant like the G3 had been. 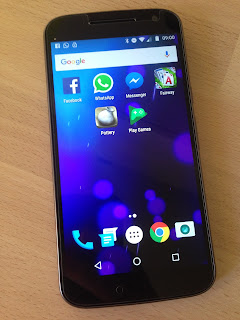 My wife recently picked up a G4. The performance gain in the new specifications are fantastic. This handset flies and for something in the mid-range market and price range gives even top end handsets twice its price a run for their money.

I was a little dubious about the 5.5” display - especially as both my wife and I had phones with 4” screens - but the phone is large but not uncomfortable in the hand, and the huge display makes reading web sites and playing games great. The larger display is now 1080 - upped from the 720 of previous devices.

It packs in a whopping 3000mAh battery which sees my wife through nearly two days of average use. It ships with Android 6.0 Marshmallow - but is due for the 7.0 Nougat update shortly.

It is also the first Moto G handset to be produced under Lenovo, after acquiring the mobile side from Google.

Moto G5
Due for release in March 2017, the specs are not yet known for the Moto G5, however rumours are it will feature a 5.5" screen and Octa-Core 2Ghz and 3GB RAM.

The whole Moto G range has blown me away and my dismissive attitude towards Android handsets have changed considerably. All four released handsets offer so much power for so little money, it is hard to see why most people would need anything more expensive or powerful.

For the budget conscious the Moto G2 is a great bargain - however it lacks 4G. The Moto G3 is a little more expensive but does have better camera, slightly better processor and 4G.

The Moto G4 is still new and commands a much bigger price tag - but worth it. The original Moto is still good but its cameras are poor and lack of MicroSD card slot might cause space issues.

For me the G2 is the sweet spot between features and price.

Find below a comparison summary of the four models.

Tablets are big business. A lot of peoples computing needs can be handled just by using one. While Apple and Google dominate the market, Amazon have a foot in the door too. Expanding on their Kindle book readers, Amazon have the Fire range - combining an e-reader and regular tablet.

My son got a Kindle Fire 5th generation as a present and I spent some time getting to know it. This model features a 1.2Ghz Quad Core processor with 1GB RAM, 8GB internal storage, card slot and a 7” screen. For a 2015 device the 1.9mpx fixed focus rear camera and 0.3mpx front camera perform very badly.

I did take some sample pictures to use on this article, but just couldn’t get them from the Fire to my Mac. Bluetooth wouldn’t work. Email needed setting up despite already doing this once. So I gave up.

It has a 7” screen that is surrounded by a rather large black border. This might seem an odd thing to write about, but it was something I noticed straight away. I wonder if it is to enable easy holding when using it as an e-reader.

It is a heavy device but seems well built. It has a minimalist look. The power/lock button, volume rocker, headphone port and MicroUSB charging port are all on the top. The MicroSD slot is the only thing on the right side. 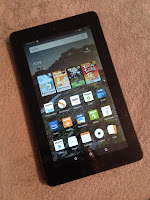 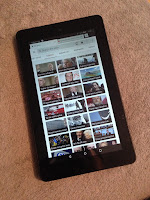 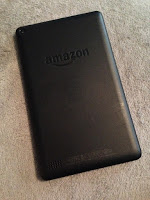 This is an Amazon tablet. Their FireOS is a reskinned version running atop of Android 5.0 Lollipop. However this brings me to the main gripe with the Fire - it has no access to standard Android apps despite being Lollipop based, there is no Play Store. Instead it has its own Amazon Appstore. You sign in with an Amazon account not a Google account. This is not an Android tablet, which without prior knowledge a lot of people might not know this.

Once set up you are faced with a homescreen plastered with Amazon apps and book suggestions - giving a very cluttered look. This tablet can of course be used for surfing, email, FaceBook and Twitter to name a few things, but oddly lacking an Instagram app so be aware this might not cover all your needs. There are an impressive amount of apps and games, but it is just annoying that Android purchased apps will need buying again from the Amazon Appstore.

UPDATE: It is possible to sideload the Play Store and associated services, by downloading the APK files and allowing your Fire to accept 'apps from unknown sources' - full instructions on HowToGeek.com.

One other thing I don't like is your lock screen is used as an advertising medium - like a digital billboard which changes each time you lock it. 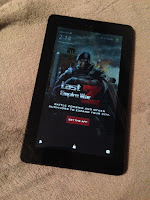 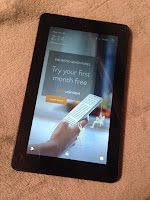 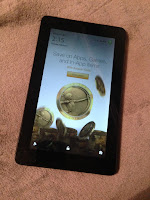 From a hardware point of view this is a very fast device. Apps and games load very fast and the whole OS is very fluid - helped by the Quad Core processor and 1GB RAM.

We have to touch on the e-reader side. You can download books directly on the device and reading them is great due to the crisp and bright screen which of course being touch means you can flick through pages too.

Battery is as good as any other tablet, but falls short of the amazing life of a dedicated e-reader. As a hybrid though, it does very well on both parts.

You may have gathered from this review that I am not too impressed with the Fire. As a tablet it is well built and runs fast with great battery life and is ok for surfing, FaceBook or Netflix, but the lack of Android compatibility puts it in the niche market and it is not clear when buying one what its limitations are.

For me a Android tablet with the Amazon app would be a better choice.


Editors Notes:
I have set up a Kindle Fire before for a friend and found the restricted Amazon app store was quite inconvenient and found I had to side-load a few apps like Dropbox to make things easier, but it is a bit of a faff really. I would only really recommend a Fire for absolute basic tablet needs, a better choice would be a second gen Nexus 7 or a Nexus 9. In the last few years though, smaller 7 or 8 inch tablets have fallen out of favour since the advent of ~6 inch smartphones and the introduction of touchscreen Chromebooks with Android apps.