I've been meaning to try installing Foresight Linux for awhile. Their focus for the distro is to be an "intuitive user interface and a showcase of the latest desktop software". Several install DVDs are available for download with KDE, XFCE or Gnome desktops. I chose the Gnome version. After a successful test in Virtualbox, I installed it on my Toshiba 6100 (1.6Ghz, 512MB RAM, 20GB HDD) laptop. 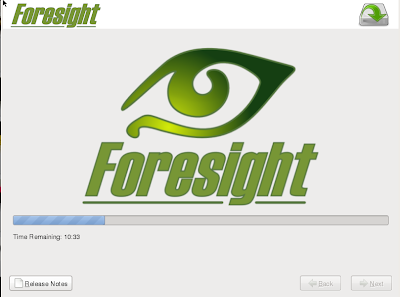 Even on this modest hardware, the install was pretty fast for a non-live DVD install, taking only around 15 mins using a modified version of Anaconda, the installer used by Red Hat/Fedora. The partitioning and user setup is all fairly user-friendly. Foresight uses sudo for admin duties and no logging in as root, just like Ubuntu. Unlike other distros, there's a choice of EXTLINUX or GRUB as a bootloader. I chose GRUB since I am more familiar with it and I know to fix it. 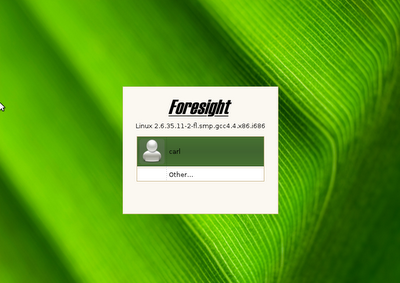 After install and a fairly quick boot that looks like a green version of the Fedora Plymouth boot screen, there's the usual GDM login screen following by a fairly standard Gnome 2 desktop, the default green theme reminds me a little of Gnox, a long defunct Slackware live CD I used to like awhile back. I'm not sure about the combination of all the green but with blue icons but there are plenty of icons are already installed, including all the Faenza ones so plenty of theme choices. 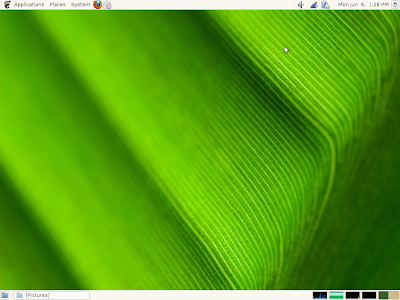 Foresight seems to be fairly light on resources, similar speed to Debian or Slackware. There's a user guide in the System menu and an interesting choice of default applications. Skype, Pidgin, F-Spot, Banshee, Totem, Mplayer and Gnome Mplayer, OpenOffice, Gnome Do, Evolution, Ekiga, Firefox (4.0.1 after updates), Tomboy Notes, Dia, Inkscape, and GIMP amongst others. Wireless networking works out-the-box as Foresight already has madwifi, intel wireless drivers, and ndiswrapper installed which should be useful for those with tricky wireless hardware. Adobe Flash is already installed too.

Unfortunately there is no graphical package manager installed by default, and is the only real criticism I have of this distro. Foresight use a package manager called Conary, which is similar to apt-get. To install applications do 'sudo conary update appname' and to remove apps do 'sudo conary erase packagename' and for updates do 'sudo conary updateall'. It is slightly odd using 'update' to install programs, you would of thought it would use 'install' instead of 'update'.
According to the documentation, "updates are faster as Conary only downloads the updates to the file, and doesn't require a full binary for download."

Update (07-06-11) As has been pointed out in the comments, one unique feature of Conary is the ability to rollback or undo any update to any point between first and last update. To rollback one update do "sudo conary rollback 1" and to see what can be rolled back do "sudo conary rblist" Conary also has a 'repair' function along with quite a few others which you can read about in the Conary manual. 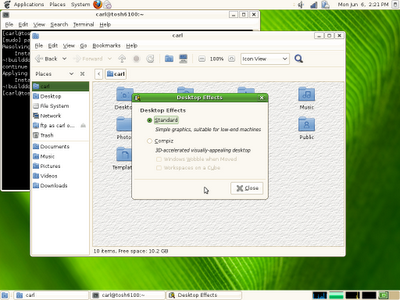 Overall I quite like Foresight Linux, it's fairly quick and easy to install and has some useful features like the afore mentioned Desktop Effects tool and the unique Conary option to rollback and repair packages. If it had a graphical package manager already installed I'd recommend this distro to the average user, but as it is I'd say if you are fairly confident on the commandline this is a fairly good distro.
Posted by Carl Draper at 06:27 6 comments: