When looking for a new phone for my son I was at a loss where to start. His Windows Phone had served him well, but the lack of apps were getting to him. So I asked around and the new range of Moto phones were recommended.

The Moto E is Motorola's budget Android handset and the Moto X their flagship phone. In the middle is the Moto G. After comparing specs, I decided to hunt for a Moto G and stumbled across a phone listed badly on eBay. It was marked as first generation, released in late 2013, however it was clear by the pictures it was a third generation released in mid 2015.

I won the auction and it arrived next day and I was correct - I opened the box and was presented with a third generation Moto G. It was in great condition with a few scratches on the screen - only visible when turned on.

I went about setting it up for my son, and it gave me a good chance to check it out and give it the once over.

The specs are impressive for the price. A Quad Core 1.4Ghz processor and 1GB RAM. It has a 5.0” screen, 13 megapixel camera main camera and 5 megapixel front camera. It is also running 6.0 Marshmallow - the current latest version of Android.

Check out the full specs at GSM Arena.

It has a great feel and build quality. The back is held on tightly and once clipped is water resistant. Its textured back makes it easy to hold, giving a good feel in the hand. With its 5” screen it makes it a large phone, but it doesn’t feel bulky. 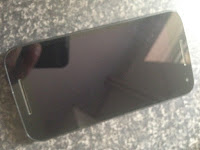 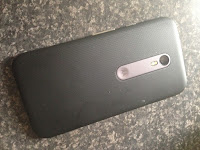 Turning it on you are greeted with a large bright screen, which was viewable in all lights, even direct sunlight. Setting up was as easy as any other Android device. Once set up you sit looking at a near stock Android Marshmallow OS. 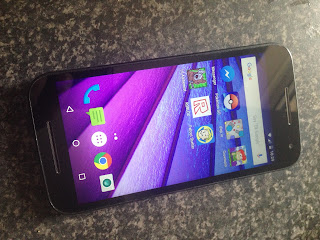 Next I took a look at the cameras. The 13mpx rear camera is amazing for the price. Crystal clear pictures that snapped instantly and it features dual LED flash. There is no camera button, but pictures are snapped by pressing the screen. Even the front facing camera produced superb images at 5mpx.

Selfies taken with the front camera. Left is outdoors. Right is indoors.

Using it as an internet device was great. Its large 5.0” bright screen made it a joy to use. Connected to my home wifi pages loaded very quickly and Facebook and YouTube were very quick. I briefly used it over 3G and it also performed very well.

It is a phone after all. So how did it perform as a telecommunications device. I live in quite a poor signal area, yet this Moto G had no issues holding on to signal even indoors. Outside it held on to a high speed internet connection very well.

Call quality was superb. I could hear the caller very loudly and the caller had no problems hearing me.

Playing music was great. I am not a fan of playing music directly on a phone as no matter what handset you have it is still quite a horrible experience. The Moto G had decent volume and OK sound output - but please, use earphones or hook it to a decent speaker/sound system.

Navigating around the phone you realise what a decent piece of kit it is. It is extremely fast, loading built in apps and the Play Store was very smooth. I then started installing a few regular apps such as Facebook, Facebook Messenger, Pokemon Go and GeekBench. As well as this it was updating built in apps and preparing the SD card. Nothing seemed to phase it.

Once finished loading apps, it was still very quick. Facebook - a usual slug of an app - loaded within seconds and refreshed just as quick. Even Pokemon Go, which can be slow, loaded quickly.

I am very pleased and surprised by how this year old mid range handset performed.

I haven’t had the chance to play with it for a full day - but heavy usage of setting it up, installing apps and giving the phone a good play didn’t impact much on the large 2470mAh battery.

I don’t have a lot to do with Android as I own a Mac and went for an iPhone for ultimate compatibility. Windows Phone had a good app which tied in with iTunes playlists meaning syncing music was quite easy. This broke with the release of Yosemite, however a small hack got it working again.

For Android it seems hit and miss. Older Androids used to just mount as an external drive and copying to and from was easy. However some newer ones require the Android File Transfer tool which is terrible.

This Moto G uses Android File Transfer and I didn’t like it. Copying music over was slow and it would fail part way through. It took a few attempts to get everything copied over. I shall be looking in to an alternative.

It also appears that when selecting which USB connection you want you have to decide between ‘file transfer’ which does music and ‘photo transfer’ which loaded Photos on my Mac. It seems you have to do things separately. (Editors note: photos are kept in the DCIM folder)

The Moto G 3rd generation shipped with Lollipop and received the update to Marshmallow. My sons came with Marshmallow already. Whether it will see Nougat - due for release late 2016 - is a good question. Will a mid range 2015 handset get a third update? We will have to wait and see.

Personally I love my iPhone and iOS - but I have had my head turned by this Moto G 3rd generation. A mid range handset that was under £200 on release and can now be purchased for about £120 new - or less on the used market - it packs a lot of quality punch for a low price range.

It is an incredible handset at an incredible price and you really do get a great quality phone that out does some high end handsets.