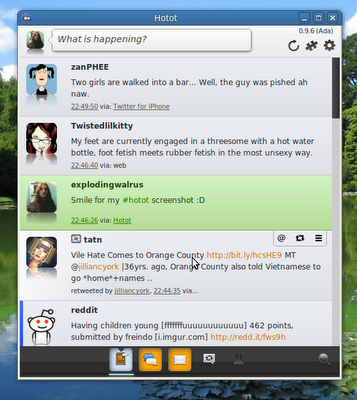 I have blogged about Hotot before but I thought I'd say a bit more since it is now one of the first apps I install on Linux and my favourite Twitter app. Having become tired of Gwibber's slowness and bugs, and consuming all my available RAM, it took me awhile to find another decent Twitter app. I used Pino for awhile but needed something better. It also seems there are too many Adobe AIR Twitter apps which are too slow for slower PCs. I also tried Tweetdeck in Chrome/Chromium but I find it far too messy and confusing. Luckily Hotot came along. I now use it on Ubuntu, Fedora and Debian, and it's available as a deb or an rpm from their Google Code page. It is also available on for Windows. Bizarrely their main site just says "coming soon" for PPAs and doesn't actually have any download links! Installation instructions are also here on their Google Code page. I'm also surprised that Hotot don't seem to have a presence actually on Twitter!

Hotot uses tabs for main feeds, replys, DMs, retweeted, and search. I really like the way conversations are shown: 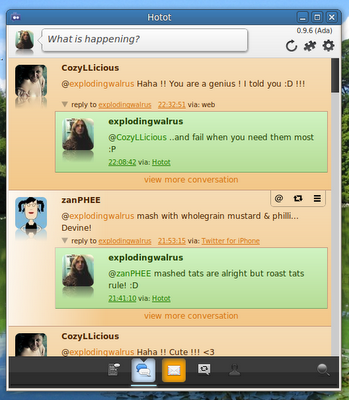 I often find I keep losing my place as new tweets arrive, as they push the old ones down. I'd like it similar to web Twitter, where they arrive queued up. A similar thing happens on Gwibber.

Keep the input box open (Hotot autocloses it after a short time) as when it auto closes I end up losing my place again as Hotot jumps about in the timeline with it's unwanted shortcuts like 'T' which makes Hotot jump back to the top!

Hotot has great features, is light on resources and easy to use. I've tried dozens of other Twitter clients for Linux but I can't find one better than Hotot, but feel free to suggest any I might have missed in the comments!
Posted by Carl Draper at 15:58 No comments: