After the absolute travesty of my Motorola Atrix 4G, I never thought I would get another Motorola until Google bought them and they released the Moto E, G and X, which are all receiving or will receive the latest Lollipop Android version. They also do not load the device with bloatware like Samsung, it is a near stock Android. When they were owned by Google they clearly got a bit of a kick up the ass! They're now owned by Lenovo but continue to produce good value for money devices, including updated versions of all 3 models. Interestingly, the Vodafone shops here have not restocked their 2014 Moto G devices after Christmas, as they are expecting yet another new version of the Moto G.


I had already decided awhile back when they were first released that I wanted a Moto G but didn't have the money for a new one on my limited budget. There have been a few versions of the G, it started out without an SD slot as the XT1032, then there was the 4G version with SD slot, the XT1040, and then the 2014 version which has a larger 5 inch screen and 8MP camera, which generally retails here around £140.

I have also recently become tired of the pitiful battery life of my Samsung Galaxy S3 and I wanted something more stable so I could play with Cyanogenmod Nightly builds (and other ROMs) while having a much more stable primary phone. I was also very tired of pulling the battery out on my S3 to let it cool down, it has been overheating and freezing up quite a bit. Anyway, I managed to save up and buy a first generation Moto G 8GB XT1032 for £88, from a second-hand electronics shop, which I think is pretty good 'bang per buck.' 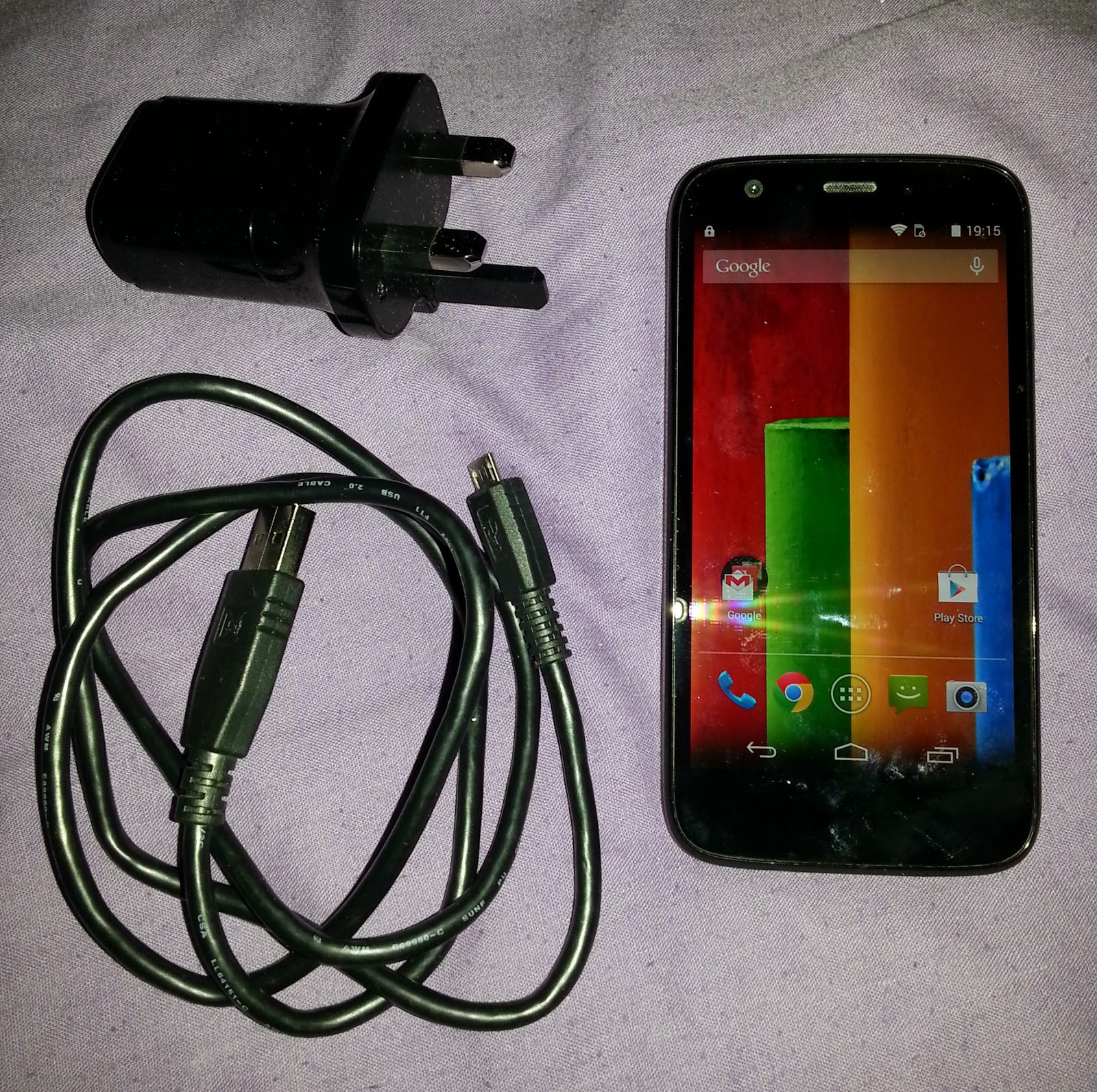 I could not find a second generation device second hand to buy locally, I prefer buying from local shops since you can have a good look at the device and have a play to make sure it's OK. I had two XT1032s to choose from at the same price, this one was in the best condition and has the grippy rubberised back too. It has not got the original charger, but the 1.8A LG charger with it is very good. There's a little mark on the side of the bezel and the back has a few marks on it, but I can easily get replacement back, as Motorola made a range of stylish alternate covers. 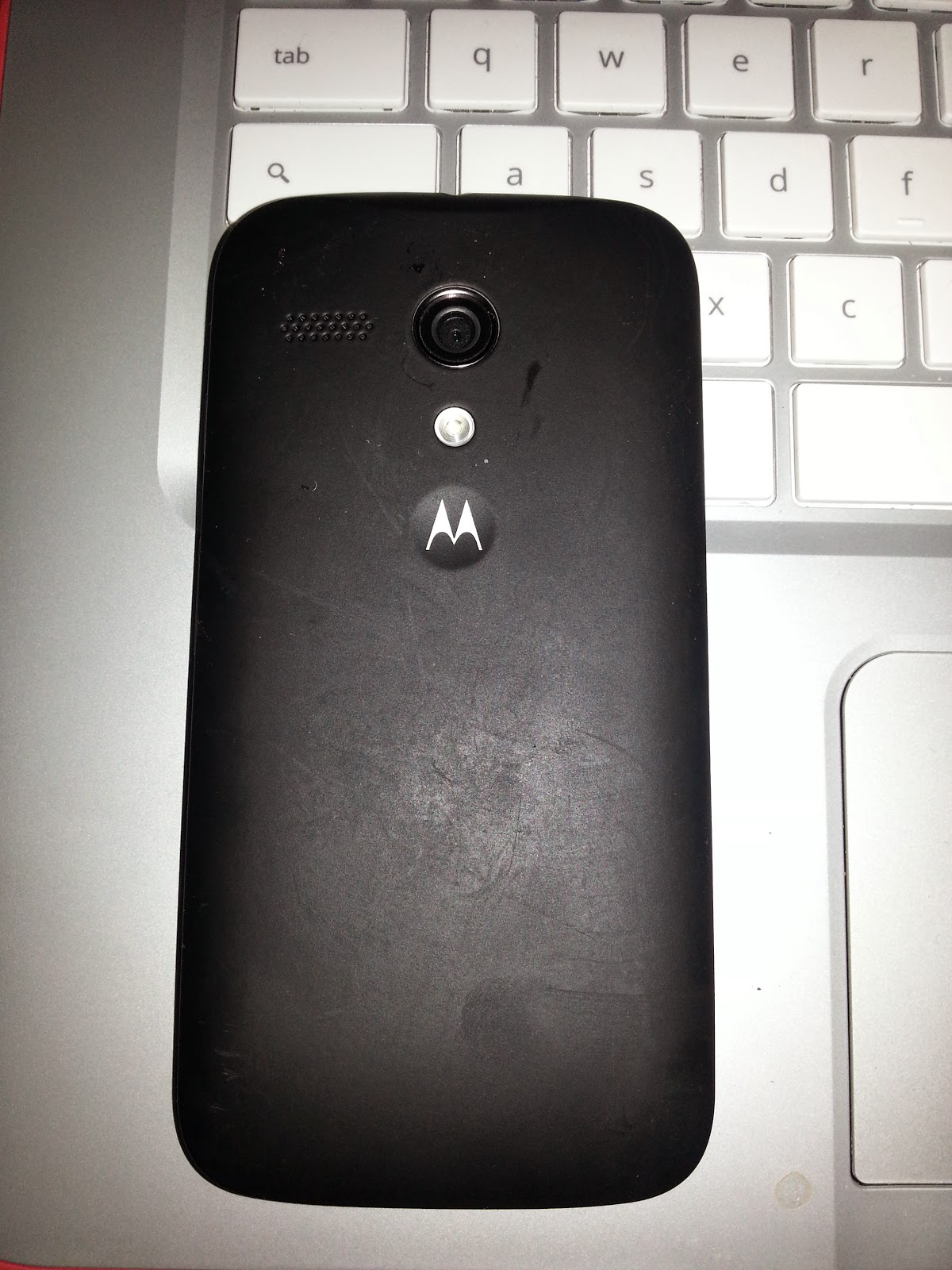 As with a lot of smartphones now, the battery is non-removable but it's a reasonably sized 2070 mAh battery. I really like the feel of the Moto G in my hand and the rubberised back prevents the phone from sliding about on a smooth surface. It also feels more durable than my S3, so much so I am not even going to use a case. 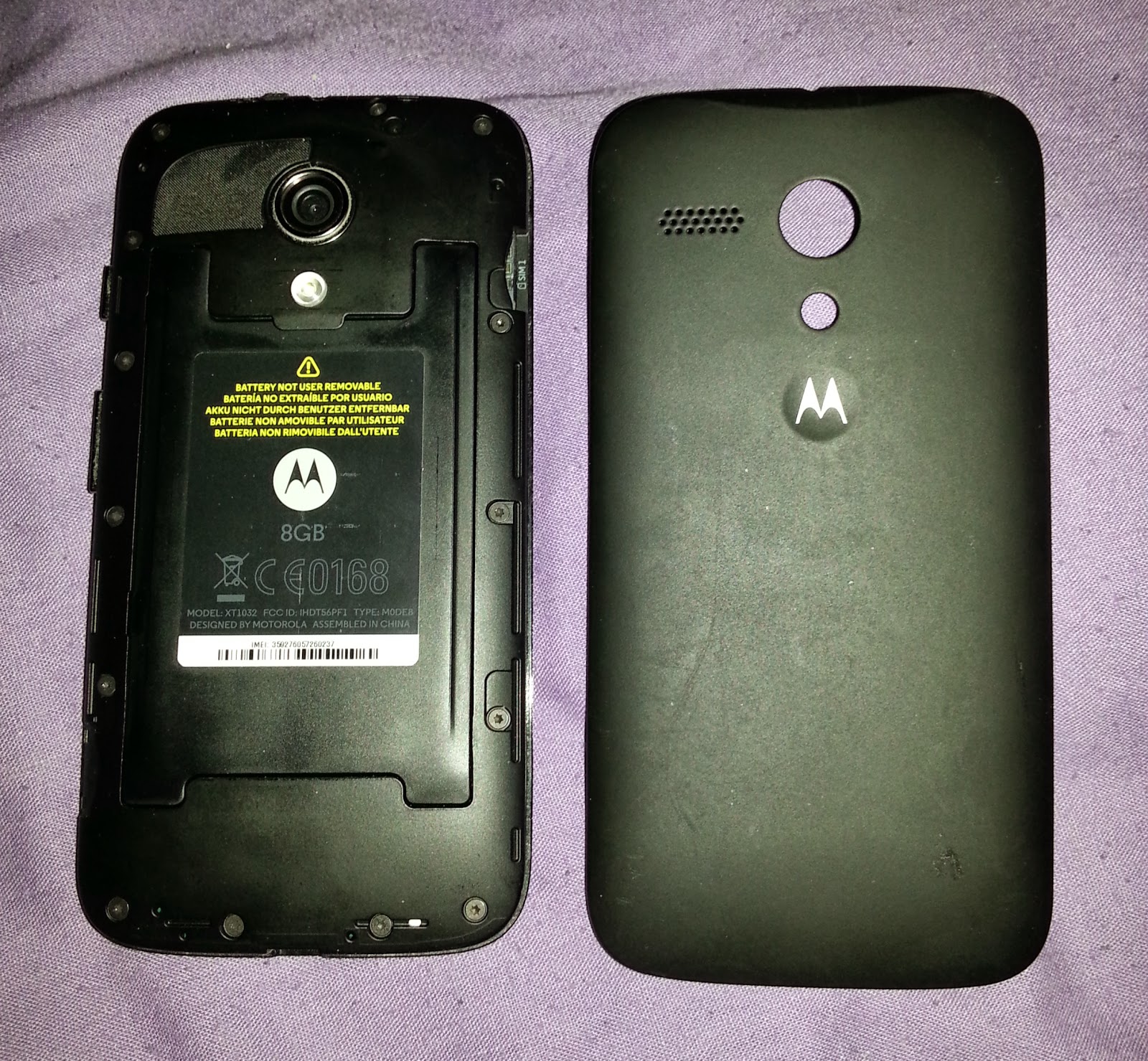 Yesterday I managed to get almost 25 hours of battery life out of my Moto G, with a mix of plenty of heavy usage as well as some idle time. I took screenshots when the battery had gone under 15% which is when I would usually put my phone on charge. I don't like to run the battery down too far too often as it could damage the battery. 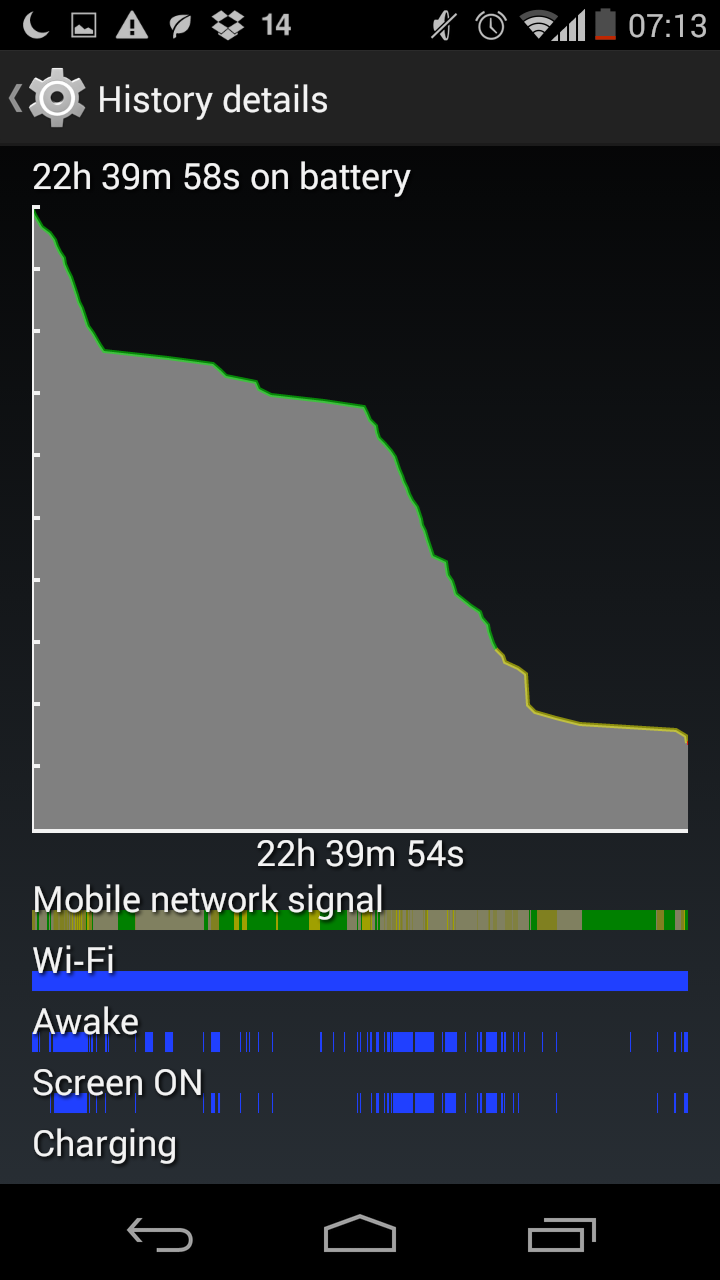 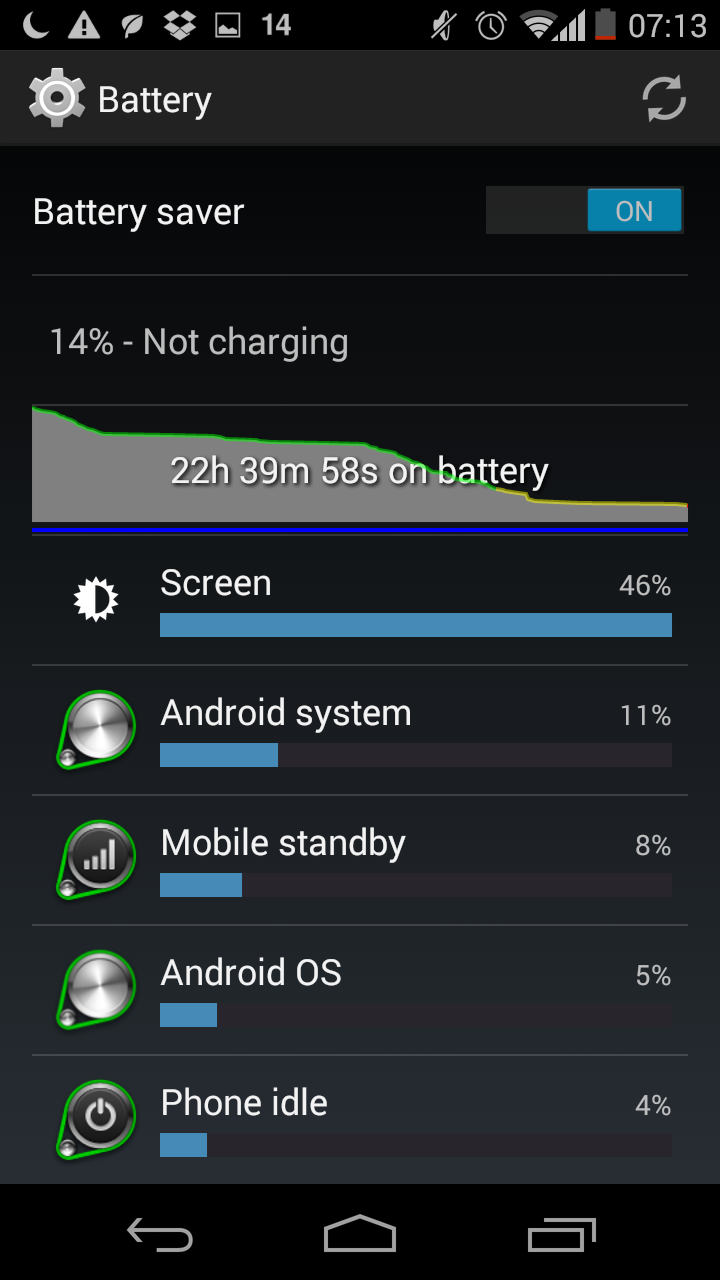 My Moto G is currently running Motorola's near stock version of Kit Kat and it feels very snappy, and I have not noticed any lag or bugs, unlike the experience I had on my Samsung device. A lollipop update is due for the first gen Moto G, once they have finished soak testing it. The only thing I have changed so far on mine is installing the Google Now Launcher as I really like the totally stock look and Google Now screen. I also have made Hangouts the default SMS app. 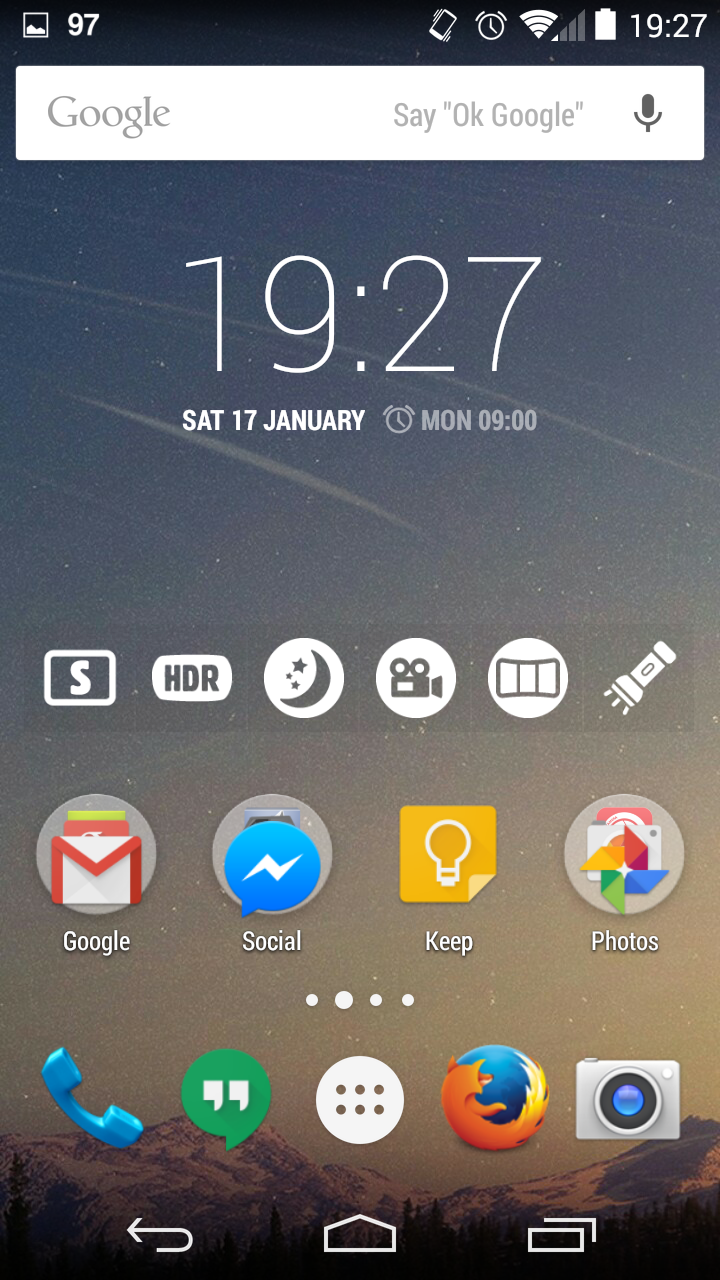 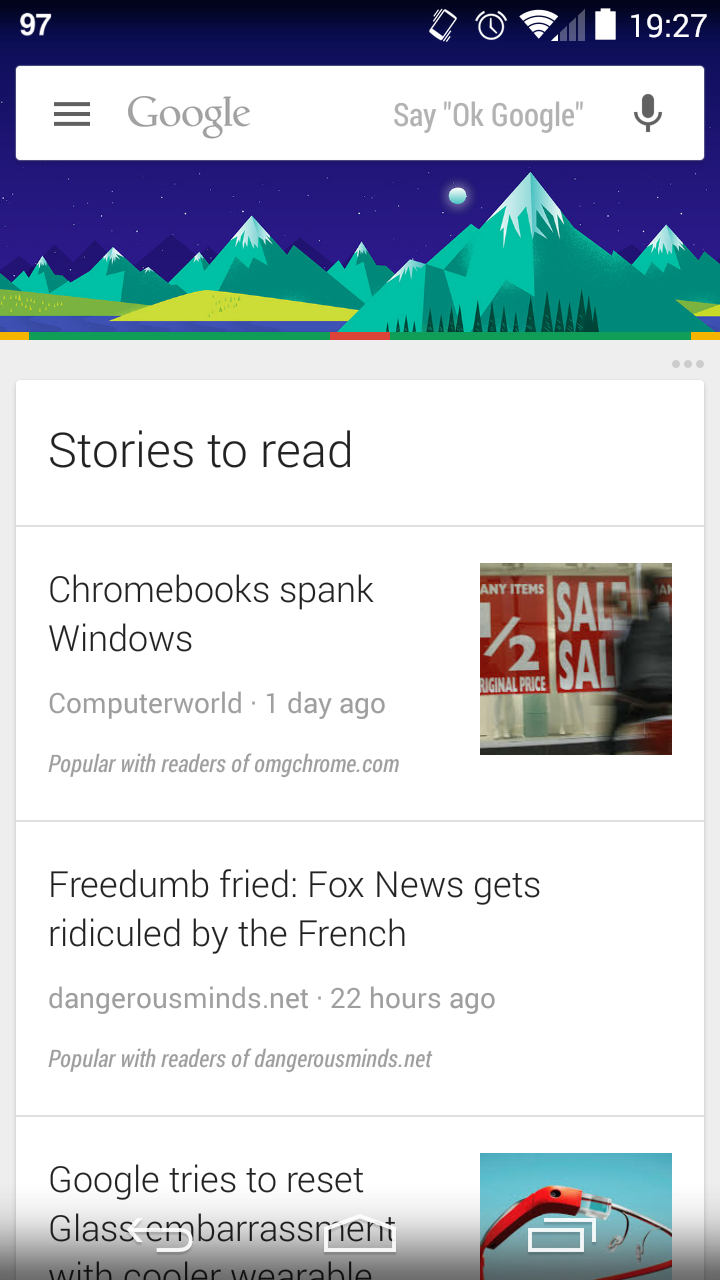 Since my original Moto G has no SD slot and only 8GB of storage I haven't installed any really large games or other large apps, and have around 3GB of storage after installing all the admittedly large number of useful apps I like to use. Of the minimal number of Motorola apps installed, I really like that you can migrate apps and photos from other Android phones with the Migrate app.

I always liked the 4.7" screen of my Galaxy S3, and the 4.5" IPS screen on the Moto G looks better in some ways. Maybe partly due to the slightly larger PPI (due to the smaller screen) but also the whites seem whiter, at least comparing it to the S3 with Cyanogenmod.

I have also been comparing the 5MP camera with the 8MP shooter on my S3. I attempted to take two photos in the same position. These are both HDR shots, links to the original files on Flickr in the captions.

The Moto G's colours look a little more washed out but it still takes a reasonable photo for a budget phone, though I shall continue to carry my S3 for photo and video duties for the extra quality and greater storage capacity. I have yet to try video recording on the Moto G but it only does 720p compared to 1080p on the Samsung. I am curious to try the SloMo mode on the Motorola camera app though. I have also installed A Better Camera and also the Google Camera (although it is missing the Photosphere mode).

At the moment you can still buy i9300 Galaxy S3s for around £140 for an unlocked 16GB version in decent condition, and a brand new 2014 Moto G is around the same price. If your budget is less or you prefer a smaller screen, the older 2013 version that I have (or the 4G version) is still a great phone. Unlike the S3, all Moto G will get (or already has) the latest near-stock version of Android without resorting to third party ROMs. And since the 2014 G has an 8MP camera it should improve the photo quality. I love the build quality and long battery life, and I would definitely recommend a Moto G if you are looking for a decent budget Android phone.