Although I liked my Moto Z Play, I was never quite satisfied with just a 'good' camera, And it had to be stock or close to stock Android. I really wanted a great camera, so when I had the opportunity to upgrade this year, I chose the best I could afford, a device that was top of the DxOmark list when it was released, the Google Pixel XL. And although they both came out in 2016, the Pixel XL had a faster, newer gen CPU, its screen has Gorilla Glass 4 instead of 3 and 4GB RAM instead of 3GB RAM. It really is a flagship whereas the Z Play was more mid-range. 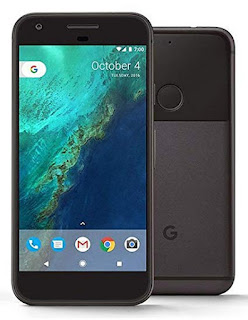 I managed to find a 32GB XL fairly cheaply secondhand. It has a few marks on the body, has no box, and it came with a Samsung charger, but everything seems to work well. The screen has no obvious marks on it. 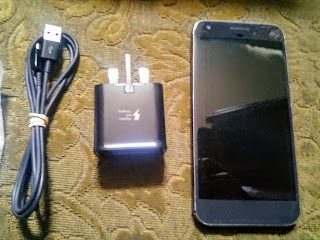 When I first picked up the Pixel, the weight of the device was the first thing I noticed. It feels heavier than my Z Play was, even though it actually weighs only a few grams heavier, and generally feels much more like a premium device than the Moto. The screen is the same size but has double the resolution and looks more vibrant. The Volume rocker and Power Button both feel reassuringly firm, no wobble in them. It's easy to see why this was a more expensive device. 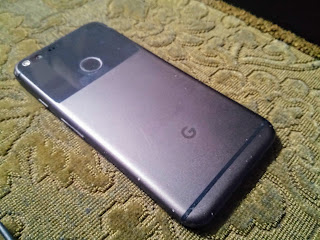 My Pixel arrived with the Android P beta, so I upgraded it to Pie. The Z Play was on 8.0 (rather than 8.1) and I wasn't confident it'd get another OS upgrade. One main change from Oreo I had to get used to was the app switcher shows apps side by side, rather than vertically. I've installed Nova Launcher as I'm not really much of a fan of the stock launcher, I like a bit more customisation and I still prefer having a button for the app drawer. It's also easy to backup and restore my config between phones. As with the Z Play, I love having an AMOLED screen with Ambient Display as it uses minimal power to display notifications. It too has Lift To Wake but no hovering over the screen to wake it up. Instead you can double tap the screen to wake it. I've also set Nova to lock the screen when I double tap again. 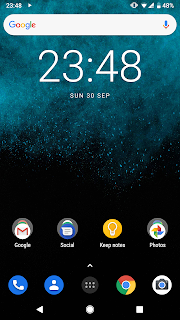 Although my Moto Z Play had a fairly clean, close to stock Android experience, it had 4 or 5 Moto specific apps added. The Pixel of course comes with bone-stock Android out of the box. I have not had a Google branded device since the Nexus 5 and as expected, the Pixel XL is buttery smooth in usage. I also like that you can make some of the UI dark themed now, though it would still be nice to have a proper dark theme for the entire OS (without rooting). Google has introduced a dark mode for YouTube and Android Messages, and I think they should have a dark mode for all their apps. 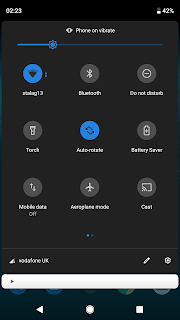 The camera on the Pixel is just amazing compared with every phone I have had previously, it takes such pin-sharp photos, and far quicker than the Z Play could do. The Moto used to sometimes have trouble focusing on the right area and it struggled in low light, I had HDR mode on all the time to try compensate. The Pixel is fantastic even in fairly low light and the Auto HDR+ mode works very well. 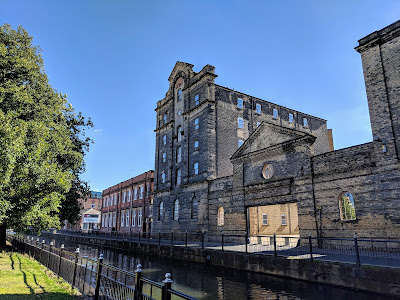 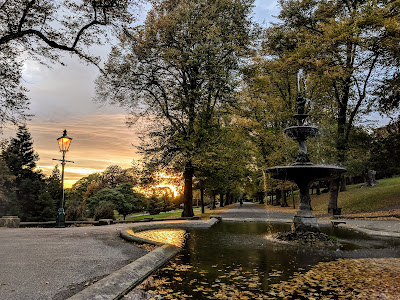 On my Z Play I used Moto's own camera app but also had Google Camera installed via an APK, and it would not run the very latest version. I am impressed enough with how much better the current version is on my Pixel that I'm not even bothering with any third party camera apps. Google Camera also recently started supporting external microphones. 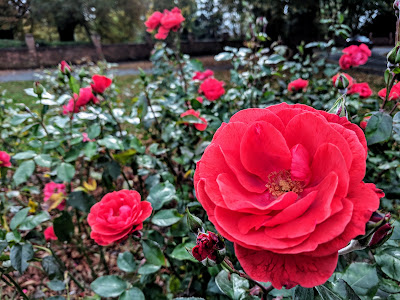 All first gen Pixel devices get unlimited uploads to Google Photos at full resolution forever, unlike gen 2 and 3 devices which get until 2021/2022. 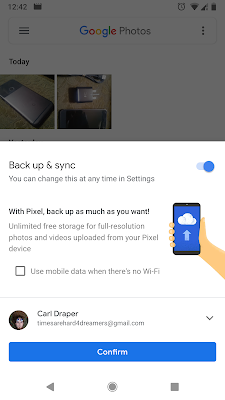 One thing I miss from the Moto is gestures - double twist of the wrist to open the camera from the lock screen (although that was often hard to get right) and double-chop motion to open the flashlight. However, you can still get the camera to open from the lockscreen by double tapping the power button. I'm also still getting used to the rear fingerprint sensor, as opposed to the front sensor on the Moto.

The front facing 8MP 'selfie' camera is very good too. Here's an unedited photo I took the other day, just as the sun had gone behind a cloud. 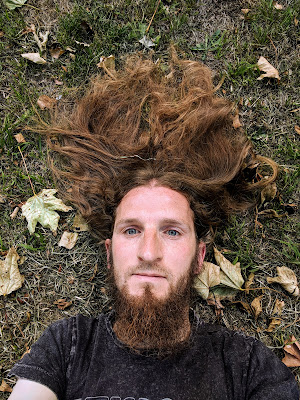 Google have recently unveiled the Pixel 3 and Pixel 3 XL along with a new version of Google Camera with some neat features such as Night Sight for low light shots which will be officially coming to first gen Pixels like mine. If you would like to try Night Sight early, there's an APK for that thanks to XDA Developers. I tried it out and the results are quite impressive. The first image below is without and the second is with Night Sight: 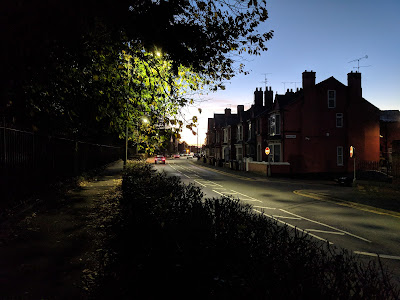 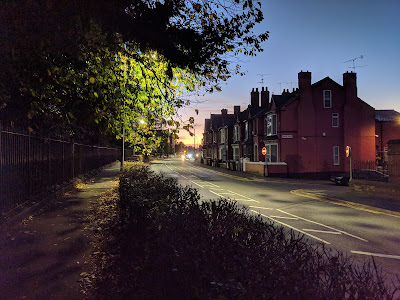 Update: Google Camera in the Play store now has Night Sight for the first gen Pixels. However to get Tracking Autofocus and Motion Metering in Night Sight in the Pixel 1 and 2, there's now an APK available on XDA Developers.


Every time I get a new phone, I worry that it won't cope with loud volumes at gigs, but thankfully there's no issues with the Pixel on the audio front. I recorded videos recently of a classic rock covers band called Inertia, and they were quite loud but on the recordings it's nice and clear, no distortion. And it coped reasonably well with the awful lighting of the gig.


Here's a video in bright sunshine - I've been sticking to 1080P as I find 4K isn't worth the hassle of having to upload such a large file size. Also I recommend not using 60fps at all as the video quality is awful - all blocky and looks like low resolution. 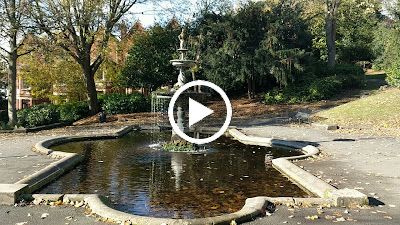 One area where my Pixel XL seems to lack slightly, at least currently with Android Pie, is with battery life. And at first I was worried that my battery was dying as I went out on one of my very long walks and took over 200 photos, 3 videos and used Google Maps with GPS a lot and it ran out stone dead 7 hours into the walk. If I had had my Z Play with me I think it would have lasted until I got back. However, since I had only just updated it to Pie stable, I decided to cycle the charge from full to flat a few times and it has since improved. Battery life has since improved somewhat and I've been monitoring how well it's been doing with Accubattery over the last two months, I'm currently averaging around 14 hours with around 4 hours screen on time on average usage days, though this is still not as good as the Z Play. 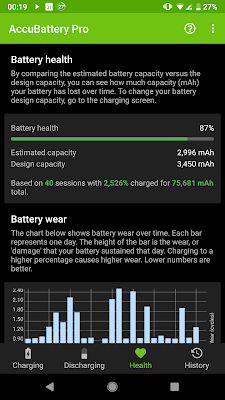 I've done a couple of 4 or 5 hour walks with lots of GPS and videos/photo taking and had around 30% left on getting home. I'm not the only one that's had shorter battery life on their Pixel devices after upgrading to Pie. 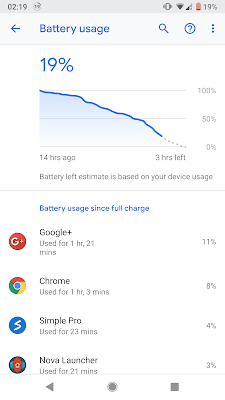 I think part of the reason the Z Play could get such amazing battery life, apart from not running Pie (and probably never will get Pie!), is it had a slightly bigger battery, a lower resolution screen, older slower CPU, and was really quite aggressive in killing background apps.

Other than the lesser battery life, I've had no real issues so far. I had a slight issue with Google Maps Timeline not working but it seems clearing it's cache and settings seems to have fixed it. My only other issue is when I needed a case ASAP. I bought a cheapo £10 flip wallet style case and I have had to cut back some of the material around the camera area so it did not intrude on photos. I'm still looking for a better flip case but it's hard to judge what they are like from listings on Amazon.

So unless something catastrophically goes wrong with the hardware, I think I will be keeping this phone for at least a few years, as it has a great camera, unlimited Google Photo uploads at full quality, forever, and it still has a headphone jack!
Posted by Carl Draper at 14:43 No comments: