Ubuntu On a 1Ghz Powerbook G4

Having had audio problems on OSX on my Tibook, I decided to reinstall, so I thought I might aswell install Linux alongside it since I'm starting from a fresh hard drive. The only PowerPC 'buntu version I could find was Ubuntu 10.0.4 LTS, which is downloadable here. First I wiped the hard drive with Disk Utility during the Leopard install, and split the 60GB drive so that 13GB of blank space was left at the end of the drive. Once I'd set up OSX, I installed Ubuntu using the livecd. During install I let Ubuntu use the largest continuous free space and left it to it. Ubuntu automatically installs the yaboot bootloader which allows you to boot into either OSX (press x) or Linux (press l) on each boot, although it auto-loads Linux by default. To change this you need to edit /etc/yaboot.conf and add defaultos=macos to the list of boot options. Save the file, then do sudo ybin -v. Amusingly, in the output, it blesses the drive with 'holy penguin pee!' 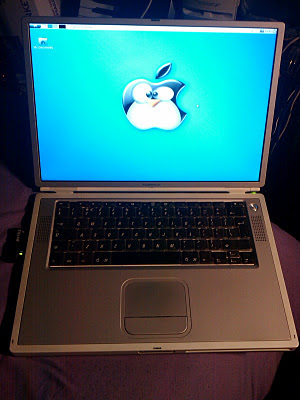 Almost all the hardware works correctly 'out-the-box' including sound and reasonable basic graphics output apart from the onboard wireless, which cannot seem to connect properly to my routers. However, even in OSX, the onboard wireless has worked pretty poorly and I have been using a Buffalo PCMCIA card which works straightaway on OSX (unlike Ralink cards) and works on Ubuntu once the right driver is installed using the Hardware Drivers tool. One thing that's slightly different is in Ubuntu you hold Fn to get the screen brightness and volume controls, while in OSX you use it to get the F keys. Also of course, in OSX the Apple key is used instead of Control for copy and paste etc. Also the Powerbook only has one trackpad button, so I had to Google to find out that F12 is used for right-click, although I use a USB mouse most of the time.

I decided to try a lighter desktop than Gnome since the Powerbook is only 1Ghz with 1GB of RAM. I tried Lubuntu's LXDE desktop first but i found it not quite as easy to use as XFCE, so I then installed the xubuntu-desktop package instead. Software wise the only apps that I miss are Hotot Twitter client, Dropbox and the browser flash plugin all of which have no PowerPC versions in Linux. There is gnash alternative for flash but it seems to beslower and even more resource hungry. Youtube sort of works though it complains of another plugin missing, and prompts me to upgrade to Flash 10 for 'better performance' Alternatively I can download them with Downloadhelper addon for Firefox or watch them in Minitube. I shall have to scout round for a good Twitter client for it. Also another slight annoyance is when I try to mount the Leopard HFS+ filesystem, I can only read some of the directories, others say I don't have permission or just don't open at all. What is nice on Linux though is having Deluge torrent client/server (which I think is only on OSX through macports), UbuntuOne and Tomboy Notes (not available on PowerPC OSX). 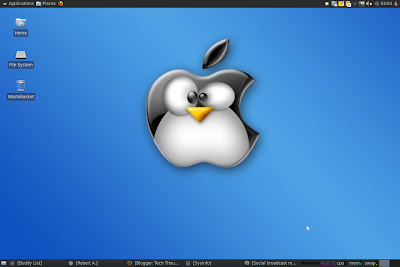 Overall Ubuntu/Xubuntu works fairly well on the Powerbook and I shall keep it on there for general use, though I might see if I can coax some better graphical performance, hopefully.

I've found an alternative Twitter client, Turpial, and though not as nice as Hotot it's still  a reasonable client. In fact I wish at least one of them was available on PowerPC OSX, since many have disappeared in the authpocalypse and I can't find a working free Twitter client (with a gui at least) for PPC Mac. 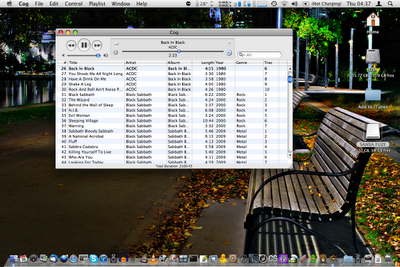 Now you can follow Tech Thoughts on Google+ and you'll be kept posted of new blogposts and tech news. 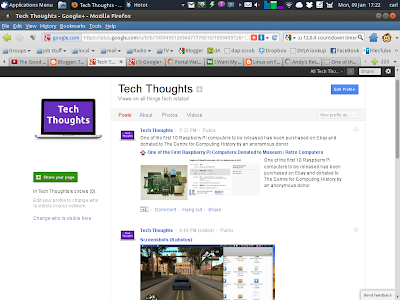 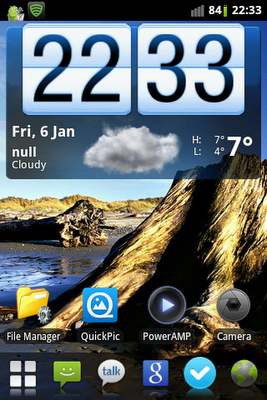 I have recently reinstalled CyanogenMod 7 on my HTC Hero, since it was so bogged down with background apps that the battery life was about 4 hours! It now feels like a new phone again and I've held back on the amount of apps that run in the background, and I have not installed Facebook or Twitter as I can kill two birds with one app by using Seesmic, which is less resource hungry than either of them. I'm also using the lightest launcher I could find, Zeam, which does what I need it to do. I like the way the dock works on it, having six visible items plus more that are hidden.

Apps wise I've switched from Cubed to PowerAmp, which runs much more smoothly on my Hero and has some nice features, it always pauses when I remove the headphones and to skip tracks you swipe back or forth on the album art.

QuickPic is now my preferred photo viewer, as it is nice and quick, and works well. I've also added a few more interesting apps like TransDroid torrent client which I use to access Deluge on my server. You can add, delete, pause and search for torrents and can also access Transmission amongst many other clients. I've also found some great remote access app like AirDroid that allows you to control your phone via web browser on your PC and Droid VNC Server for VNCing into your phone! Also another great app for managing apps and settings is Elixir 2.
Update 24/02/12 I have switched music players again, to MortPlayer, which does most of what Poweramp does with less resources and is completely free too.
Posted by Carl Draper at 20:52 2 comments: