Since my Dropbox is pretty full (I'm using nearly all of my 4.4GB of storage) I'm always on the look-out for alternative file syncing apps, so I was intrigued when a fellow Google+ member mentioned Wuala by hardware storage makers Lacie. Just like Dropbox, it's cross-platform, it runs on Linux, OSX, Windows, iPhone and Android. Wuala is available for most distros and installation on Ubuntu went without a hitch with the Deb package. After installing you'll find the it in the 'Internet' menu. I found I had to manually add it to the Startup Applications by making a panel shortcut then dragging and dropping that into it. Also, thanks to the Wuala team on Twitter, I've now found out that to make the app minimise on startup, on Linux, edit the item so the command reads: 'wuala -silent'. On OSX, add a line with ' silent ' to wuala.cfg found in ~/Library/Application Support/Wuala/. 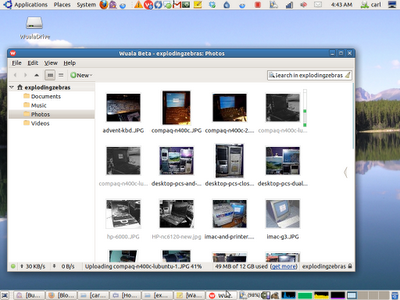 The app itself is Java based and feels a bit bulky (at least on my Dell Latitude D505), but is functional enough, though for adding files I found it quicker to drag and drop with nautilus. By default the files are in /home/user/WualaDrive/wualausername but you can change this in the app's Preferences. There is also web access through an in browser Java app, which I didn't have much luck with on Firefox (it crashed) or Chrome/Chromium (it either didn't work or was very sluggish. Dropbox has the advantage here, with their much slicker web interface. 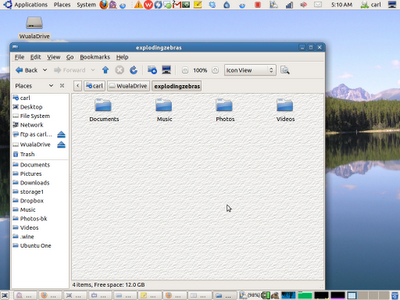 The Initial 1GB free storage is stingy considering Dropbox, UbuntuOne and others offer 2GB free from the start, although you can start with 2GB if you follow a referral link. Perhaps my connection was a bit busy, but it seemed to take a long time to upload a small number of photos. You can tweak the upload/download limits if needed, but one thing I like in Dropbox is LAN syncing, where by it will sync between PCs on the LAN, reducing internet upload/download usage, good for those with monthly limits. Edit 05/01/12 You now get 2GB, 3GB with referrals with Wuala, bringing it into line with Dropbox and UbuntuOne. 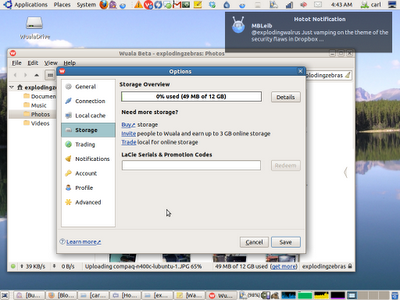 Just like Dropbox, you can get more free storage by inviting others (up to 3GB, compared with upto 10GB with invites on Dropbox). You can also temporarily boost your Wuala storage with promo codes, which unfortunately only last for a year. I wonder how things go when they run out. Unlike Dropbox there is also a third option of trading some of your local disk space to gain more online storage, this I have yet to try since your computer has to be running for at least 17% (4hrs) of the day. Security wise, "All files get encrypted and are stored redundantly. No one unauthorized - not even Wuala as the provider - can access the files." "Every file is encrypted with a different key. The list of these keys is encrypted with your password and stored on our server. Your own password is very important here: it never leaves your computer, so we do not know it. Hence, not even we can access your data." Hopefully, this means not even the FBI can access your files... 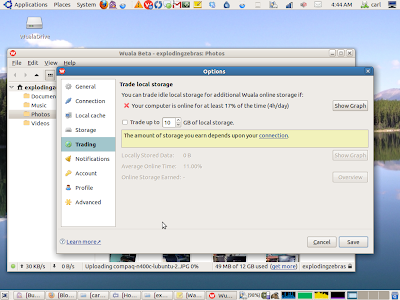 Conclusion
Wuala is pretty good, considering it is still in beta, but I really would like LAN syncing and a larger initial storage would be nice and they need to make the app start and minimize on login. Oh and at the moment if you change a file it uploads the entire file again, unlike Dropbox, though apparently this will be implemented soon. Overall, this is one sync solution I'll be keeping an eye on. Thanks to Shaun Mallette on Google+ for telling me about the program.
Posted by Carl Draper at 20:42 3 comments: