Debian Lenny on a Compaq N400C 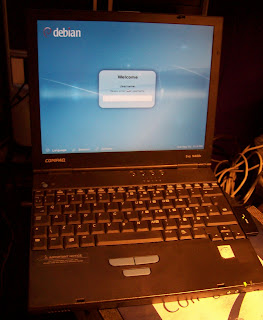 I've been using my Compaq N400C for a while with Ubuntu 8.0.4 and it ran OK, up until just recently. Ever since a recent update, it kept running ok for a while then freezing up, two LEDs would flash and that would be it. I'd have to hold the power button down to force shutdown. I even tried to reinstall with Ubuntu 8.0.4 and 9.0.4, but got a kernel panic during install. I checked RAM and replaced the hard drive (swapped the original 20GB for a 30GB), but still received the same problem. To install anything on this laptop really requires the docking station that has the CD drive (and two extra HDD bays too) that I don't have. I use the minimal install discs with a USB DVD writer, as I never had any luck with a full OS disc, i'd always get errors. So then I thought about a different distro. I didn't fancy having to get used to an RPM based distro again, like Mandriva or Fedora (which I have had bad experiences with) or even Suse which I'd never consider now they are sleeping with Microsoft, besides I'm not keen on YAST. Nope, it'd have to be Debian based or indeed be Debian - so, onto the install:

I used the smallest of the minimal install discs, the business card ISO, and installed it from my Plextor USB/Firewire DVD writer using USB. I chose to just install the commandline only install at first so I could check it booted ok afterwards. All was fine so far, so I rebooted. removed the DVD drive, then installed the Gnome desktop with "aptitude install gnome" as root. I also installed ssh and deluge-torrent, then I rebooted again to be greated by the nice Debian GDM screen. I did notice all the sound mixer faders were all muted for some reason, and discovered the ESS Allegro/Maestro3 soundcard wasn't found. I Googled around and found this post on the the Debian User Forum. What solved it for me I think was installing the firmware (untar then compile it with "./configure", "make" then "make install") then running, as root in the terminal: "rmmod snd_maestro3" and then "modprobe snd_maestro3" and after a reboot it was fine upon unmuting the mixers. Now the volume buttons on the front of the laptop do actually work the master volume.

The first thing I needed to do was get my Edimax EW-7108PCg PCMCIA wireless card working, as I used Ethernet during install. For the wireless I needed the Ralink firmware which you can download here or directly from here. Annoyingly, double-clicking a Deb package opens it with 'Archive Manager' and even when I open it with GDebi Package Manager it doesn't work, just crapping out after opening. So to install Deb packages I have to resort to "dpk -i nameofpackage.deb" in a terminal. Upon reboot, my wireless worked, and I connected to my WPA encrypted network.

Next up I just had to replace Iceweasel, which has to be the worse software name ever, with a proper version of Firefox. I did consider installing Firefox manually using the tar.gz package but it's not exactly conveniant, so I installed Swiftfox instead. Swiftfox is an optimised version of Firefox, with versions for Intel and AMD 32bit and 64bit. At the moment it is based on Firefox 3.5.2.1 which is almost the latest version. I then installed Pidgin messenger from the Debian repository and the Facebook plugin.

For playing all the required codecs I added the Debian Multimedia repository by adding "deb http://www.debian-multimedia.org stable main" to the software sources. I've installed w32codecs, flash-player-mozilla and libdvdcss for now. I also transfered my Swiftfox settings from my other laptop by copying the .mozilla folder (in /home/username/). Since I use Dropbox for syncing files I installed that too. This required adding the Dropbox Ubuntu Gutsy repository, as a Debian one isn't provided.

This was a slightly unorthodox install compared to a standard install due to the hardware involved, and is a little bit more fuss than an Ubuntu install, but I'm fairly happy with it, it's a solid stable distro, and feels a bit lighter than Ubuntu which is handy on an 850Mhz laptop with 256MB of RAM!

Update: Swiftfox has now been updated to the latest version, 3.5.3.
Update 2: Found a nice short tutorial on installing the latest Adobe Flash plugin in Debian.
Update 3 14/02/10: I have since gone back to Ubuntu 8.0.4, since various updates seem to have solved the problems I was having.
Update 4 (02/06/10): The hard drive out of this is now in my Toughbook CF-27 and this now has a 40GB drive with Lubuntu 10.0.4 LTS which is running fine, using Chrome for browsing and it also boots extremely quickly.
Posted by Carl Draper at 11:16

I am having problem already in the beginning of the installation . Mine n400c doesn't want to boot from external CD/DVD drive. It doesn't recognize it in bios or even in windows.

Make sure you use a powered USB drive as the 3.3 Volt USB ports on the N400c can't handle it. Once you find it shows up in windows, reboot and it should appear in the bios.

I got full external DVD burner, not a 3.3 volt. The problem can be that the burner is internal Plextor enlosed in casing. I never had a single problem with that burner.
I will try to get out the HDD, partition, grub and start with installation while out from notebook. Afterwards I will place it in notebook and finalize the instalation. Hope that woul work.

Yeah, i put the drive of mine in my test machine with a mini-ide/ide adaptor, installing Lubuntu that way, out it back in the laptop and it works fine. I had best results with putting the DVD drive set to master on one cable and the laptop drive (defaults to master) on the other cable. That way you don't need to mess about with Grub afterwards.

I do not understan the second part of your comment? Why would you set the DVD to master and HDD to master?
I see a grub as a potential problem, therefore I will maybe not use windows anymore.

Well in the laptop the drives act are set to master by default. So it makes sense to replicate that on the desktop pc you attach the drive to. It makes sure Grub sets the right drive to boot Linux from.

Thanx for explanation. I would attach the HDD to the external USB casing.
Anyway, I have attached a USB to the n400c and it offered me booting up from that USB. Quite surprising for 2001 year notebook.
I believe installing via USB would be much easier, maybe I will try both just for fun.

When i tried installing from USB with the live cd i found it would lose all contact with the usb drive, i discovered this is because USB times-out after a certain time, only briefly, but long enough to mess up the install, as ubuntu can no longer find the dvd drive. I had better luck with the Minimal install as thats only around 50mb i think. install just the basic minimal commandline system then reboot an remove the disk. Then do "sudo aptitude install ubuntu-desktop" to install the normal desktop etc.

I will actually install ArchLinux which has the similar installation as you have described as ubuntu minimal install.
Core system first, after reboot the rest.
I will try it this weekend and if it won't work I will go via installin the system on external HDD