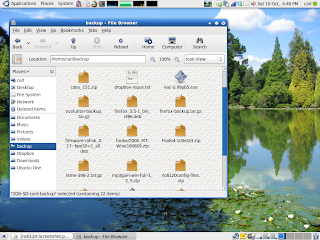 I've just had to reinstall Ubuntu on my HP 6120 Laptop, due to the graphics messing up - I was using Intel beta graphics drivers, so I guess the latest ones don't like my 915 chipset much. Consequently I was left with unusable graphics. Thankfully, it doesn't take too long to get a fresh Ubuntu installation back to how I want it.

Firstly I logged in, in safe-graphics mode and backed up my photos, some downloads, documents and my settings, over ftp to my desktop. I backed up the hidden folders for Firefox, and Pidgin which are ".mozilla" and ".purple". After reinstallation I simply copied these back into the new home directory. I used Evolution's own backup/restore function to get my email sorted. I should also say that you could also use a seperate /home partition but this time I wanted as little detritus from the previous install as possible. Also If you upgrade to a new version of Ubuntu, you may get config problems. If you can't boot into the old install you can copy everything over using the Ubuntu livecd.

After the reinstall i was welcomed by a clean, very brown, Ubuntu desktop. This I just have to change! I reinstalled Clear-Blue theme and Human-Azul icons. I also installed wallpaper-tray, a utility that switches wallpapers at preset times, from Synaptic. I then installed Dropbox and pointed wallpaper-tray to my wallpaper folder in the Dropbox folder. For extra eye-candy I installed the Compiz advanced settings tool, I need my wobbly windows and spinning cube!

For playing all the usual codecs and for some other stuff not included in the default repositories, the easiest solution is Medibuntu. I added the repository (link is to the howto) and installed 'non-free-codecs', 'libdvdcss2' (for encrypted DVD playing), Skype and Google Earth. Make sure to agree to the Google license agreement, otherwise installation will fail.

I installed Avidemux For video editing and to transcode downloaded youtube FLV videos, and Deluge for torrents (Linux distros mostly). I prefer Deluge to Transmission, the default client in Ubuntu as I find it easier to use. For playing videos and streaming video/audio I use VLC media player, it is one of the best players around. All three are cross-platform, running on Windows, Mac and Linux.

For keeping an eye on my laptops temperature and performance I always install smartmontools, lm-sensors, xsensors, and xsysinfo and they're corresponding applets which can all be found in the Ubuntu repos. For extra configuration I install Webmin, which is good for remote admin too. Do 'sudo sensors-detect' in a terminal (and press return a few times to answer the questions) to configure lm-sensors then reboot to get it working. Another good admin tool is phpsysinfo which gives a nice run down of your hardware in a webpage, a good alternative to Belarc Advisor on Windows. Of course, not for the command-line-phobic, ssh is the daddy of remote access - 'sudo aptitude install ssh'. I also installed the old Gnome network manager, 'gnome-network-admin' as i prefer it to the new one, especially for static connections.

Also of course, I installed the Facebook Pidgin plugin and Swiftfox, both of which I've blogged about before. And that's about it for the moment, last thing I installed was the Sun java plugin 'sun-java-jre', everything else I'll probably install as I need them.

I have since replaced this laptop with another HP6120, (this time a slight upgrade 1.8Ghz, from 1.6Ghz) and I have been running Ubuntu 10.0.4 for quite awhile and is my favourite of my laptops due to it's nice 15 inch screen and keyboard.
Posted by Carl Draper at 18:01