Linux on a Panasonic Toughbook CF-27

Having been given a Toughbook CF-27, I decided to see if I could run Linux on it. As you can see from the specs below, it's quite low powered but it's very solidly built and also splash proof. It's also completely silent due to the lack of any fans and has a very nice, bright, screen. I was hoping it would be the touchscreen version, but alas it isn't. 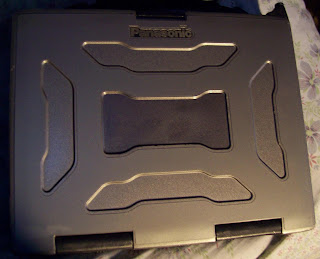 As the Bios has a password on it, it won't boot from anything but the hard drive, so I had to take the hard drive out and use another PC to install the OS. I chose Debian Lenny as it's well supported and a little more lightweight than the latest versions of the *buntu family. But first I had to take the hard drive out of it's metal caddy, which was easier than I thought. An access plate on the bottom of the laptop is only held in with two latches, and the caddy comes out quite easily. Removing the drive was easier than other Toughbook models.

Notice the sim-card slot, it also has an extendible flexible antenna. (click for larger images) 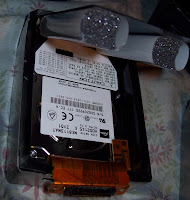 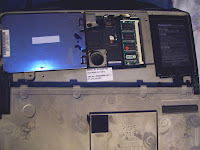 I then attached the hard drive to a mini-IDE to IDE adaptor and installed it temporarily in my test box (AMD socket A/Via board, 1.6Ghz). I installed the XFCE and Gnome desktops (type desktop=xfce at the boot prompt for an XFCE-only system), build-essential, lm-sensors, fusesmb and a few other bits. Once finished, I shutdown, removed the drive and reinstalled it back in the Toughbook. I'm pretty sure Windows would have had a fit at this point but Debian booted quite happily, despite the big difference in hardware. I downloaded Google Chrome to replace Epiphany and Iceweasel (aka Firefox 3.0.6). I haven't always got along with Chrome but it's quite handy for low spec PCs since it's fairly lightweight and I like the built-in browser sync for bookmarks and themes using your Google account. Of course there's always the other option of Midori. Due to the lack of an ethernet port or wireless (which was an option), I'm using an Edimax PCMCIA wireless card, which worked once I downloaded the Ralink firmware. I installed the deb package with 'dpkg -i firmware-ralink_0.14+lenny2_all.deb' as root, as the Gdebi tool isn't installed by default. 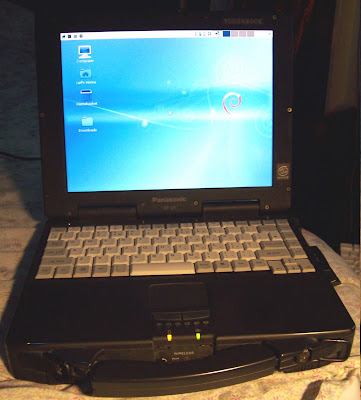 As I don't plan on storing much on this laptop, I decided to keep the original 6.4GB hard drive but I've seen some with 30GB or 40GB drives. I may upgrade it later. My next job is getting the onboard sound working. I've had trouble before with Yamaha sound cards on Toshiba laptops. I'll update this post once i get it sorted!

Fixed the sound problem thanks to this bug report, that includes the solution. Debian doesn't include the alsa-firmware package anymore so I had to download it from here and compile it ("./configure" and "make" in the alsa-firmware directory once you've extracted it) and copy the firmware files (.fw) to /lib/firmware/yamaha (need to create it). Rebooted and now it works!

Update 2
Added the Debian backports repository and installed the later version of Pidgin so I can now chat on MSN on it.

Update 3
I've now upgraded the RAM to 192MB and using the Gnome desktop as i had problems with disappearing panels in XFCE, plus I generally prefer it.

Update 4
I've just upgraded the hard drive to a 30GB Toshiba drive (often cited as the maximum this can take which is wrong, the maximum is 120GB, limited by the age of the controller) that came from an old defunct laptop and also served in my Compaq N400C at one time. It already had Debian installed, booted straight away and bizarrely has no problems with the onboard sound.

Update 5
I have recently upgraded to Debian Squeeze without any problems, although it did take awhile!

Was there no way to reset the BIOS password?

I'm still looking for a solution, even removing the battery and RAM only resets the Bios settings rather than the password. I'm told by a friend who works with them that there is a chip that needs a couple of pins shorting out, though I have not worked out how to get to it or where it is, yet.

My cf-27 should be arriving tomorrow, hoping it hasn't got a BIOS password. Not sure if it has a touchscreen yet. It's just going to be running navigation (OS memorymap) and some HAM radio software machine in my landrover.

Sometimes it's disabled in the bios, which i thought mine might have been until I checked the serial number which matched one i saw on e-bay.

Is the GSM modem usable?

Er apparently so, but probably only in Windows, I've yet to try it. Found a forum post with some details:

"You can use the windows standard 9600 baud modem driver on com 4 (see your bios) and it will run. If you put in a sim card you can use the modem as an old fashion dial-up modem connection in most of Europe, Middle East and Asia. I use it as a back-up if everything else fails. Its a slow and expensive connection, but it always works. You can use a local sim card while travelling. Its good for mail etc. The modem does not support data like gprs or umts etc...(

It is possible to make voice (use: ATD; in hyperterminal) calls with it, but in my CF-27 the speaker and microphone are not hard wired to the modem.

You can find more information about the modem under this link. It has a different name but it is exactly the same modem.

Mine arrived yesterday.
Same model number as yours. Even had the grey sticker in middle of lid to cover where the company branding has been scrapped off, so maybe same batch? I removed the entire lid and chemically stripped back to the base metal - I prefer that look.
Thankfully the BIOS is not locked with a password. No touchscreen though - shame. Mine does have the DVD drive fitted and the memory is 256Mb.
I installed a barebones XP on to the 6GB HDD it came with last night to try out. The PCMCIA slot is a bit flakey and coudl only get an ancient wifi card to work which doesn't like anything other than WEP. Also the PCMCIA 4 PORT usb2 CARD I tried wont work correctly when laptop is running on its battery but seems to work fine when plugged into PSU.
Battery lasted 2hour 40mins btw... not bad considering.
I had a 100GB hardrive sitting in a dead omnibook500 so thought I'd try that. Much easier to swap out hardrive on the cf-27 when compared to the linked tutorial. The HDD had ubuntu already installed and was surprised that it booted straight to desktop without a glitch.

I've just upgraded the RAM in mine to 192MB (I havn't got any 256MB sticks atm), and I tested out the battery on mine last night, and got 2 hours 35 minutes, which as you say, is not bad.

Agreed on the tutorial, I mainly linked to it for those who have a different model Toughbook.

I noticed the BIOS does not reflect the correct size, seems to be running fine though. I had to switch it to XP and the format went fine. The HAM software I want to use it with doesn't play nice with linux unless running under virtualbox and I wasnt' even going to attempt that on the toughbook so XP (barebones) will have to be lived with.
Sorted out the wifi issue, not sure what went wrong last time but WPA encryption works though old card (cabletron roamabout) is limited in speed (802.11b). I wont be using any card or connection in the landrover, it just for convenience setting up.
Have fitted a thumbnail bluetooth dongle to the rear. Had to cut a tiny aperture into the cover to allow it to be closed. Will make a sealing cover/bump for that. Bluetooth is needed for the BT GPS. Have loaded the 30gb of UK OS maps too along with Memorymap and all working fine. Not much left to do other than load up the amateur radio stuff and some pdf landrover manuals.

I'm mainly just using mine to check emails, Facebook and Twitter, going to take it on the train as the battery life is longer than my well-worn Compaq N400C.

http://www.icexrecycling.co.uk/panasonic_toughbook_cf27 they do have a touch pad

http://www.offtek.co.uk/ works fine. INstalled antix and used usb to ethernet adapter which got me onto internet. now have put on Zencafe (slackware) This doesn't recognise usb to ethernet.I put put a lan pc card (pcmcia)10/100m cardbus with ethernet in one of the slots on the right hand side.the green light flashes but zencafe only has Wicd manager.

Can anybody help in getting pcmcai to work ?

Slackware isn't the easiest distro to configure, but this may help: