The root partition became corrupted yesterday on my Toshiba 6100 laptop, possibly due to a faulty hard drive, so I had to do a fresh install on a fresh drive. It was running Lubuntu 10.0.4, the lightweight desktop derivative of Ubuntu. It started out as Ubuntu but was too slow for this old beast. It has a 1.6Ghz Pentium 4 CPU (yes, it runs way too hot!), 512MB RAM and a 20GB hard drive. I then installed the Xubuntu (XFCE) desktop then settling on the Lubuntu (LXDE) desktop, but it still seemed sluggish, so I considered my options. Slackware would be very light but a lot of effort and I prefer Debian or Debian based distros as that's what I'm used to and know best. I like Debian but I find it's packages to be a little old, at least in Lenny and it's not quite as user friendly as Ubuntu. After a brief but failed install attempt with Saline OS (another Debian-based distro) I thought I'd try Mint Debian Edition which is a rolling release distro based on Debian Testing. The main advantage of being a rolling release means it never needs to be reinstalled but it means things may break occasionally. 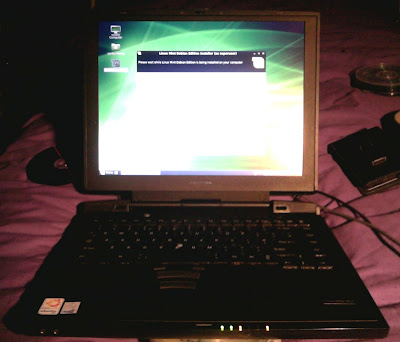 Mint Debian Edition installs in a similar way to Ubuntu, using a live CD but with a different installer. It didn't take too long to install even on this old thing. It asks the usual questions, users, root password, partitioning etc. One interesting thing I noticed was it automatically chose a hostname based on the model of my laptop - "satallite6100-laptop" which was a nice touch. After the install finished, it prompted a reboot into the new OS. Boot time was nice and sprightly, taking around 35 seconds. A Notify message popped up informing me of wireless networks available, this uses onboard Intel wireless so it's probably why it works just fine 'out-the-box'. I then found I had 708MB / 646 packages to upgrade! 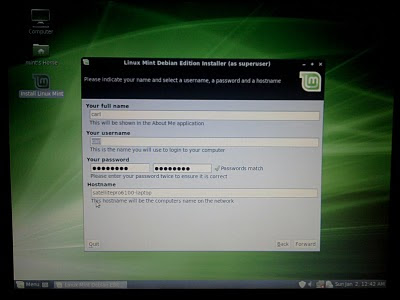 The default desktop uses a single panel along the bottom, like Windows, with it's Mint Menu. I'm not too keen on it as although the search feature is nice it still takes far too much of my 1024x768 pixels for my liking! 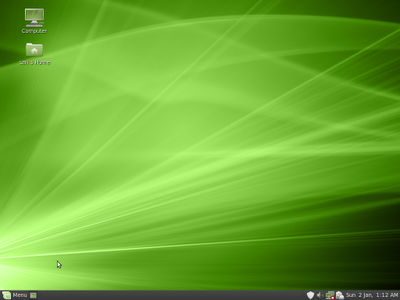 I've changed the layout to a more traditional Gnome arrangement by removing the Mint Menu and adding the Gnome 'Main Menu' from the 'add to panel' dialogue, to my new top panel. I also added the User Switcher to the top right of the top panel, it's not quite Ubuntu's MeMenu but it will do. Also for the chop is the colour scheme - black and green is just not my scene! I'm using Human-Blue icons (taken from the Ubuntu version of Mint) , Murrina-Blue controls and Bluman window border and some tasteful wallpaper. 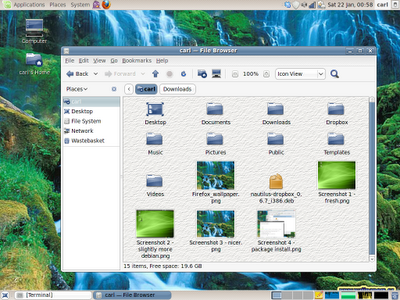 Just like Debian, you can only install Deb packages via the commandline until you install the Gdebi installer. I'm not sure why the Mint devs didn't include it. It is nice to see the nautilus-terminal extension already installed so that you can right click and select 'open terminal' in a folder. To manually install a downloaded Deb package on the CLI, do something like "sudo dpkg -i package-name.deb". The main user is in the sudoers list so you can use sudo to temporarily become root, just like in Ubuntu. Of course the best place to start with packages is by seeing if it's available in the repositories using either Synaptic or with it's 'Software Manager' which looks a bit like Ubuntu's Software Centre. MDE uses Debian Testing so packages are more upto date than in a standard Debian install. MDE includes the latest Firefox (once I installed updates) as well as Debian's Iceweasel. 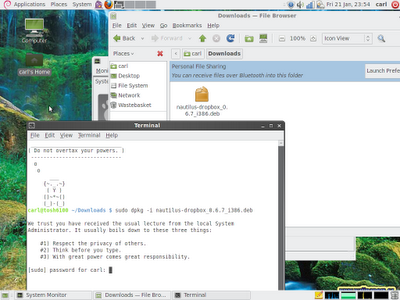 Standard packages include MPlayer, Gnome MPlayer and VLC, which is nice since I always install VLC anyway. MDE plays encrypted DVD movies straight off since libdvdcss is installed by default, as are all the useful codecs and Adobe flash player. It's also nice to see GIMP already installed too, since Ubuntu has removed it recently to save space. Two packages I immediately removed were F-Spot and Gwibber since I prefer Gthumb or Picasa (which is in the repositories) and Hotot, which is a much lighter Twitter client than Gwibber. By default Thunderbird and Evolution are installed.

Overall Mint Debian Edition offers a good compromise - it has the speed and lightness of Debian and some of the ease of use of Ubuntu and I'd recommend it for older desktops and laptops. It has up-to-date packages, has all the codecs for music and DVD playing so it's fairly easy to use out-the-box. According to their website "LMDE requires a deeper knowledge and experience with Linux, dpkg and APT" due to it being a rolling release and to "expect rough edges". The main thing I miss from Ubuntu is UbuntuOne for syncing my Tomboy notes.

I've kind of gone off the various versions of Mint mainly due to it's use of a difficult to remove custom search for Firefox, I prefer to use Debian itself rather than LMDE. I have now installed Fedora 14 on the Toshiba 6100 to try out and I've kept it as it's pretty good distro, much more stable than when i tried Fedora 11. The only thing I don't like about Fedora is I can't seem to ssh or VNC into it on my network, I even tried disabling its firewall and SELinux to no avail.
Posted by Carl Draper at 18:12

Yes, It's really a great distro. I had to reinstall my Xubuntu after some havy xorg.conf modifications and some boot problem afterwards. Interesting the Xubuntu was a poor handler of my old video card ati 7000, but Mint Debian edition had no problems with it out of the box :). I always wanted to try a rolling release distro. I just installed Google's Chrome browser, skype and Google's Voice and Video chat plugin.