Updates at the foot of the page

I've just aquired a Dell Latitude D505 laptop for a very good price. It's got a 1.6Ghz Pentium M CPU, 512MB of RAM, a DVD/CD combo drive, and a 30GB hard drive which had Windows XP Home installed. Naturally I wanted to put Linux on it straight away! I chose Ubuntu 10.0.4 as I mainly use the LTS releases. I plan on upgrading directly to the next LTS when released. I'm not keen on Unity or Gnome 3 so I may switch to XFCE when the time comes. It's also missing the battery at the moment and I intend to get one very soon. 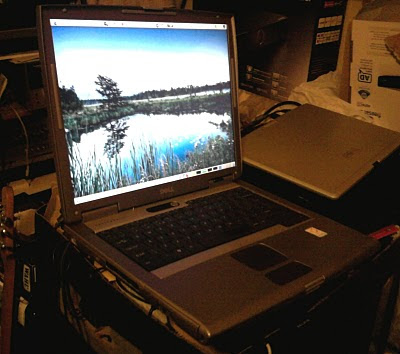 First I tried the Ubuntu live CD and it seemed to boot but never got to the desktop, only a black screen, so I did a bit of Googling and found various solutions including this on the Ubuntu Wiki. To fix the graphics problem, just follow these instructions in "Workaround A."

In some cases, this bug causes i8xx users to boot into a blank screen on both the LiveCD/USB and a clean install or upgrade. To enable the above workaround in these situations, add "i915.modeset=1" to your kernel boot parameters.

1) At the purple screen with a keyboard and stickfigure, press Enter to get to the menu.

2) Hit Enter to select your language, and then press F6 and then Esc.

4) Press Enter to boot the LiveCD.

Now the live CD boots like normal into the desktop. The install only takes around 20 minutes but after rebooting you need to follow the second set of instructions:

1) Hold down Shift while booting to enter the GRUB menu.

Now we just need to permanently add these to the GRUB menu so we get working graphics every time! ina terminal enter:

GRUB_CMDLINE_LINUX="i915.modeset=1"
then save and quit gedit, then do:

..and now we have working graphics on every boot!

Ubuntu boots in a only around 30 seconds and is quite snappy though I think I need to upgrade the RAM to 1GB as it swaps quite a bit after a long Firefox session. Ubuntu also suspends properly unlike my HP nc6120 which used to until I upgraded it to 10.0.4. When i get a new battery I'll update this post to include battery life.

Update 26/03/11
Got my new battery, a little disappointed I'm only getting around an hour and a half out of it when mainly browsing the web. Apparently laptop batteries need to be fully charged and discharged a few times before they reach their full capacity.

Update 29/03/11
The only other thing that doesn't seem to work is lm-sensors does not detect any temperature sensors, though this is only a minor inconvenience since it doesn't seem to get that hot most of the time. it's certainly running cooler than my HP nc6120. The latitude is currently my favourite of my laptops. I'm also thinking of getting a secondary battery which replaces the DVD drive and gives it an extra 4 hours of battery time!

Update 30/03/11 (2) Graphics Fixed!
Well I fixed the graphics problem by upgrading the kernel to one from the Mavericks Backports repository. Add the repo with:

then install the Maverick kernel with:

I've also upgraded the RAM to 1GB so it feels a bit snappier now and swaps memory less. Video playing is still a bit glitchy in Totem but fine now if I use Gnome Mplayer and VLC.

Update 02/05/11
Having had some weird random reboots recently I decided to see if it's hardware or software related i decided to try Fedora 14 on it. I have just installed using the Fedora LiveCD install on a spare HDD and it went very smoothly. I didn't have to mess about with GRUB to get the graphics working, however the first thing I did was disable SELinux, as it's fine for corporate desktops but too much hassle for the average user. Whether I will keep Fedora on there is another thing, i'll see how it goes, as I tend to miss little things of Ubuntu like UbuntuOne and Tomboy Notes

Update 05/06/11
I have wiped Fedora 15 out having tried that for awhile and thought I'd try out the iQunix re-mix of Ubuntu 11.0.4 and surprisingly it actually works without any modifications to GRUB.

Thank you for making a clear and concise set of instructions for fixing the boot graphics problem on some Intel Graphics chips using the Intel i915 driver. I paraphrased some of your blog post and added it to a post on ubuntuforums.org in hopes that it might help someone. I added a link to your blog post. Hope you don't mind.

thanks, well I based my instructions on Ubuntu documentation and a lot of Googling :)