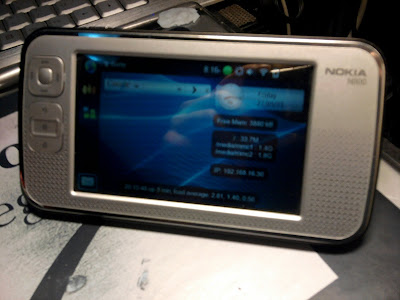 I've recently purchased a Nokia N800 Wi-Fi-only internet tablet. I've wanted one for quite some time since I read an article in Linux Magazine on it when it was originally released back in 2007.

This one has been very well looked after, boxed, has a spare stylus, original paperwork and original 128MB memory card. Of course the first thing I did was replace that with a couple of 2GB SD cards (it takes one internally and one externally, up to 32Gb each). I haven't fully tested the battery life on it yet but it seems pretty good.

The N800 runs Maemo, a Debian based OS that Nokia used to use all the time on it's phones. It has the 2008 OS and third party repositories installed. It's built in Application Manager reminds me of that of a 'proper' Linux distro and of course it already had an X terminal installed. Since it's based on open source software there is still a thriving community for apps and mods for Maemo devices.

My favourite app for it by far is Pidgin (instant messenger), it's great to having it on all my Linux PCs (along with Adium on my Macs) and my N800. There are also various useful plugins for it in the package manager. You can also install apps using apt and dpkg just like a Linux distro. 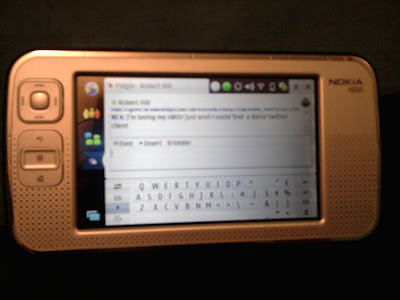 I also love the built-in email app, it was easy to setup Gmail with IMAP and I like the way it notifies of new messages in the left panel and by flashing the 4-way pad blue, although I couldn't quite get GMX to work with it. The N800's web browser is based on Mozilla and works pretty well, and I've had no problems browsing my usual sites. It's perfectly happy browsing quite a few full sites too, like Facebook, rather than the mobile version . It also came with Skype for it's built in VGA camera which pops out the left-hand side of the unit and swivels 180 degrees. For video playback though, Mplayer is far better than the old media player it comes with, as it plays higher quality videos and newer codecs with ease. Other useful apps (along with many others) I have installed are VNC Viewer, ssh, gFTP, x11VNC, mCalendar, MediaBox and Canola (two very swish media suites) most of which can be installed either from maemo.org or from the App Manager on the device.

I'm very pleased with it to say the least, it's what I've always wanted and it suits me nicely since I don't use 3G and always wanted a portable Linux device for Pidgin, VNC and ssh, the only thing that's missing is a usable Twitter client since most of the ones that are around have fallen because of the oAuth-apocalypse.
Posted by Carl Draper at 18:45

Just stumbled onto your page after getting my N800 out of the drawer after years of lying in there. I flashed it again with the most recent OS (which may be probably the one that was there years ago) and took a look at what is available. So far the nicest surprise is the Opera Mobile browser which looks and works perfectly. Quite a nice surprise there. A bit disappointed that there are no working Twitter clients as it would make a great twitter device. Hopefully it will change soon, but at the moment I am again using it for web browsing from my sofa.
A neat little device actually.

indeed, since the maemo.org community is still alive and well, i think a usable twitter client should turn up at some point hopefully. The Opera browser is good but always views pages in mobile form, whilst the inbuilt browser shows in normal web form, which i prefer, I use both depending on what i'm doing. I've also recently tried Fennec, the mobile version of Firefox on it. It's similar to Opera but with add-ons, it is a little bit buggy unfortunately, at least the version i found.

I mainly use my n800 as an ebook viewer although I occasionally browse the web on it as well. I use FBreader mainly for my ebooks. I also watch a tv show or movie once in a while with mplayer. I think I'm going to look into putting meego on it soon as OS2008 is getting a bit old. Enjoyed reading the article. Nice to see another n800 tablet user.

yeah, I've watched a few things in Mplayer too, watched an episode of True Blood on it, while in bed! It does have a very nice screen anit's one of the best gadgets I've bought.