Sadly the native Linux version of my favourite Twitter client, Hotot, is unsupported and now not working, because Twitter have shut off API 1.0. I decided to use the Chrome app version instead which has meant that I've started running Firefox and Chrome at the same time just so I can use Hotot. On my laptop however that might be a struggle so I tried to use just Chrome on it's own, but I just can't put my finger on why I don't like using it. Perhaps it's the way some plugins feel like they are not integrated enough. When browsing I always seem to feel like I'm sort of on top of the web rather than in it. It's hard to explain, it's just a different feel.  Although Chrome is quite tidy in layout, once you install a lot of plugins there's a whole load of icons appear in the top right of the browser which clutter things up. Also I find Firefox's Awesome bar is better at suggestions and such than Chrome's URL bar. On the whole I just prefer using Firefox.

Several other Linux Twitter clients have also fallen in the APIcalypse, such as Polly and Turpial, which is a shame as they were both great clients. They apparently had plenty of time to prepare for the API 1.0 shutdown so what gives? This means I probably may not spent quite so much time on Twitter, though I do still have a good usable Twitter client on my Android devices, which is Plume. If anybody knows of a usable Linux native Twitter client that works now, please suggest one in the comments! 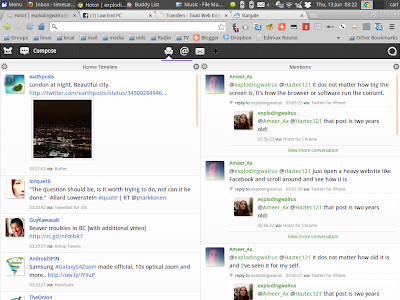 Update 13/06/13: I have discovered a fairly new native Twitter client called Birdie, it's a little lacking in configuration options at the moment but it mostly does what I need it to. One thing I'd like is a "reply all" option.  Also being in development, it is a little crashy! 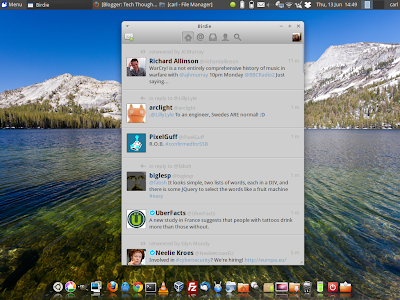 Update 2!
I have found out to get Polly working again you need to install the latest builds from the Daily PPA. And it's stable, though I do find the default layout a little simplistic, I went into File and New Stream and added a Mentions stream. Also Search is not yet implemented either. For me, it's not as nice as Hotot was but it will have to do for now. 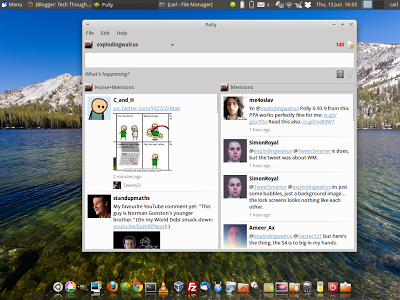