I use Linux for pretty much all of the time, whether it's my Mint 17.2 KDE main desktop or my HP Chromebook 14, (or indeed my Nexus 5 and Motorola Moto G) but there's one thing that I missed and that was the latest and greatest Grand Theft Auto. I decided to get a separate PC to run GTA V and Steam games, so I picked up a cheap HP xw6600 workstation (2.5Ghz quad core Xeon, 4GB RAM, 250GB HDD) that's the exact same model as my main desktop (except my main desktop now has 16GB of RAM and more hard drive space). I installed Windows 8.1 Pro, installed GTA V (using the retail DVDs) and Steam games. I then decided to upgrade to 10 mainly to try it out and get used to it since people have already started asking me whether it is any good or not, and also of course because it is a "free" update, at least as long as you update within a year.

After many reboots, the update had finished and then I waited for the problems to start, the glitches and the crashes.  But they haven't. So far. Windows 10 boots just as fast as 8.1 did, though I have disabled the hybrid boot mode as my PC was basically hibernating and resuming, and the shutdown took far too long. It now shuts down much faster. Bare in mind I'm using an old 250GB mechanical hard disk.

I then personalized the desktop a bit, hid the Search bar, and made Chrome default again (seriously Microsoft, it was default in my Windows 8.1 install, why change my preference? Oh yes, to promote Edge browser, which I found to be meh). I was quite happy with the result. I quite like the black taskbar and colours that use hints from my wallpaper, it actually reminds me a little bit of ChromeOS or a dark KDE theme. The login screen actually reminds me of Gnome Shell's login screen, in a bad way! Click to actually see the login box.

As you can see the Start menu is back, and it's not bad, apart from by default it is filled with Metro tiles that I have no interest in. Even when you remove all the Tiles from the menu, it still stays the same size, wasting screen space. It should resize automatically. you have to manually resize it, like you would a window, grab one edge and drag it. All your apps are in the suitably named All Apps menu in alphabetical order. Anyway it has at least persuaded me not to install a third party start menu. I also have no interest in any of the tablet-like features and Microsoft's app store which basically seems to consist of a few Metro apps and shortcuts to web apps. I have no use for Metro apps on a gaming PC.

Microsoft has also finally added virtual desktops by default in Windows 10, but they are pretty useless for me compared with those in most Linux desktops, since there's no configurable keyboard shortcuts for them. On KDE, I like to flick quickly between virtual desktops using CTRL + ALT + the Cursor keys. You also cannot reorder the desktops or use different wallpapers for each as you can in OSX and KDE. 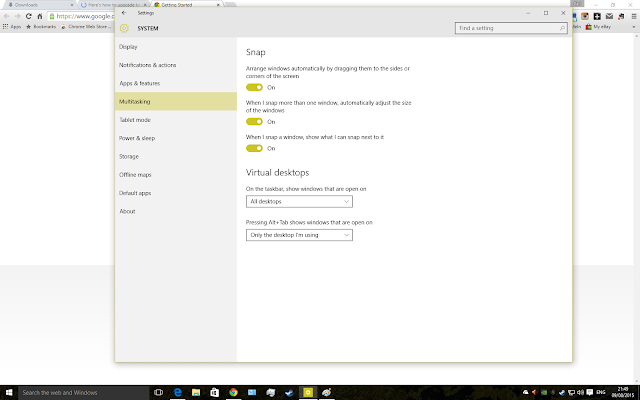 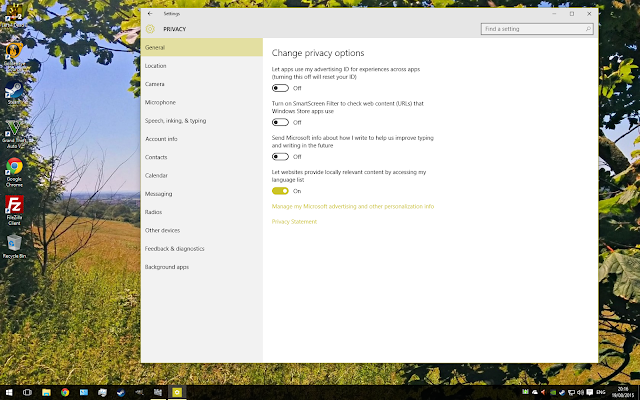 Microsoft have unfortunately made Windows 10 a privacy nightmare, right out of the box. For a bit more privacy you need to disable Wi-fi Sharing, Cortana, Location, Camera Access and other stuff, by following this handy guide on ZDNet, but the problem is, even once you have changed all these settings, Windows 10 sends data to Microsoft, despite privacy settings, which is more than a tad annoying!

Another area that is causing some problems for some is Windows forced updates which are not disableable on all but the Pro versions, which has caused some users' PCs to fall into a constant upgrade/fail/reboot cycle, though fortunately I have personally not encountered any show-stopping updates, so far. in fact i feel like I'm in the minority of users that hasn't encountered any problems, probably because all I do is play a few games on it. I have not done a fresh install so i can always downgrade to 8.1 if I need to. 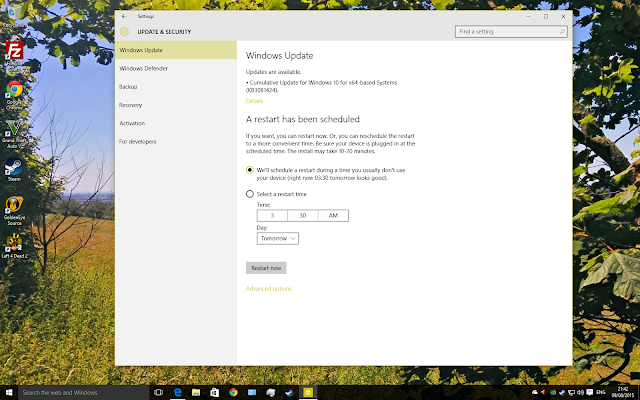 So overall I have found Windows 10 to be the best version of Windows so far, but also the worst version in terms of privacy, or rather, the lack of it. And of course when i say "best" i mean "least worst" as after all it is still Windows, it still needs regular updates, it still needs regular scans from the built in antivirus (I am never surprised by all the zero days and security scares) and it still needs to reboot, a lot, and when you're in a hurry it just happens to configure updates on shutdown! In Linux, the only updates that need a reboot are kernel updates, and even that is unnecessary on recent Kernels.

I shall continue using Windows 10 on my gaming rig, but I shall not use it for anything else other than gaming, hence using a separate PC so I don't have to to dual boot. Perhaps one day Rockstar will embrace Steam for Linux so I can remove Windows altogether! In the meantime there has never been a better time to try Linux for those of you who haven't already.

Several months back an update broke Windows 10 and I had to do a fresh install, thankfully this was easy though having to reinstall GTA V from all those DVDs is always a pain! Since then Windows 10 has not given me any trouble, though it still annoys me with trying to schedule updates all the time, and then taking forever to install them on shutdown/startup in that wonderful Windows way!