About 9 months ago I switched from Apple and my ultra-thin MacBook Air to Linux and picked up an older Dell Latitude E5410. Performance was great, but the size and weight bothered me. So I decided to look for a smaller alternative.

I have always liked ThinkPads and had a few very old IBM ones in the past. After a week of looking I went for an X201, this is my first Lenovo ThinkPad I have had. Specs wise it isn’t much different to the Dell it was replacing, but it wasn’t about getting a faster machine. 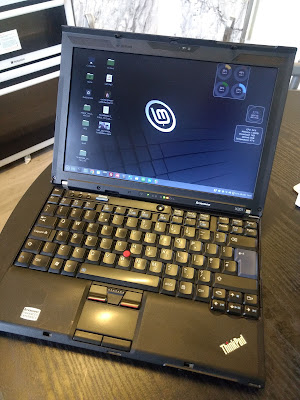 The ThinkPad X201 packs in an Intel Core i5 2.4Ghz processor (second gen), a 12.1” screen, older style keyboard (not a fan of the new chiclet style) plus g/n wifi, USB 2, Ethernet and ExpressCard slot. Mine came with 4GB of DDR3 RAM, but it takes the same as my Dell so swapped and upgraded the ThinkPad to 8GB.

I had a 240GB SSD running Linux Mint 20.1 and it was simple case of taking it out of one laptop and putting it in the other without any fuss or needing to reinstall anything. This I have to thank my friend, and blog owner, Carl for, as I had no idea you could do this and would have wiped and reinstalled. Linux has a long history with ThinkPads and the current latest 64-bit Mint runs a dream on this X201.

Within half an hour of this tiny beast arriving this morning I had upgraded the RAM, swapped the SSD, gave it a good clean and fixed a slight bulge in the keyboard caused by a small piece of shield underneath not being in the right place.

This is a decade old business class machine. It isn’t going to suit everyone, but for web browsing, article writing and the small amount of music, image and video editing I do, this is perfect. The integrated GMA graphics card isn’t suitable for gaming, even basic games will struggle, but I have never used my laptops for gaming.

Despite its small size, the keyboard is full size with the exception of smaller arrow keys. Typing this article on it was fantastic with the only issue being the red TrackPoint button occasionally catching my fingers when typing – something I will get used to again.

The trackpad is quite small, but you expect that on a small laptop. I like the dual mouse option, TrackPoint with buttons and a multitouch trackpad with its own buttons. 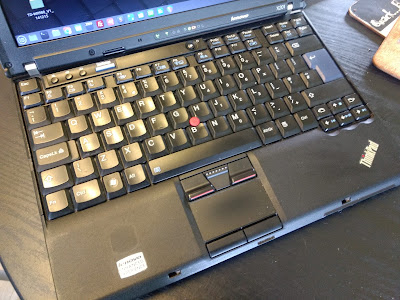 It has a few extras such as built in webcam and a ThinkLight, which is a small light above the screen which will shine down on the keyboard.

This is a beautiful laptop. My Dell weighed a whopping 2.1kg and you really felt it sitting on your lap and really that is the only thing that bugged me about it. The ThinkPad however weighs around 1.4kg and is so much lighter and smaller.

For its age, it is in excellent condition, with just a few scratches on the sides and a small patch on the top that has peeled, but it looks like it is a rubbery surface. 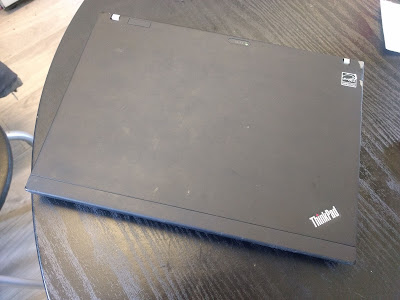 I am very happy. I now have a great performing laptop that doesn’t crush my legs and is just the perfect combo. Modern computers are so locked down, which is why I prefer something older that I can upgrade the memory and drives in or can insert a card such as PCMCIA or ExpressCard in to add extra functionality.

Knowing the Dell ran Linux Mint fine I was expecting the same performance from this ThinkPad. I wasn’t wrong and if anything it runs a little smoother but I cannot work out why.

This really is perfect.

Check out my YouTube channel for portable and older gaming as well as tech videos, including my video review of the ThinkPad X201.