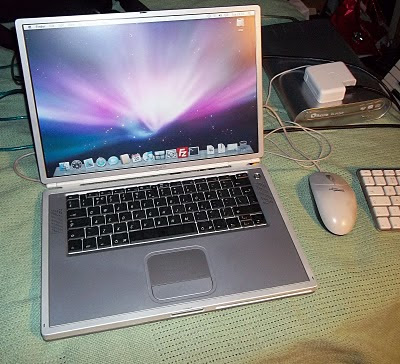 Having recently acquired a 667Mhz "TiBook" Powerbook G4, I set about bringing it up to date, software-wise. The previous owner has already maxed out the RAM to 1GB and installed a faster, 60GB, hard drive. Most Tibook's have a DVD ROM or combo drive, but mine has the optional CD writer. It arrived with OSX Panther installed, so using a Firewire DVD writer, I did a fresh install of Leopard using Leopard Assist to get around it's 867Mhz minimum requirement. It tricks the Open Firmware into reporting 933Mhz to the OS. Once complete, this can be reset by resetting the PRAM and NVRAM.

It's surprising how usable how this 9 year Powerbook is for every day use. I mainly use it for general web browsing and with MIDI music software. Native Instruments B4 (Hammond organ emulator) works perfectly with no lag using a USB (1.0!) MIDI keyboard with the onboard audio (on a PC, with Windows, I had to install a Creative Soundblaster Audigy2). The only problem these days is finding apps that still work with PowerPC Macs, thankfully there are quite a few free and/or open source apps around, here's the main free apps I use:

Web Browser: TenFourFox
For web browsing, Firefox and Opera no longer support PowerPC Macs. Luckily, there's TenFourFox, an upto date version of Firefox for older G3 and G4 Macs, of course there's still Safari, however although it's quick, I don't find it as useful and my favourite add-ons are not available for it.


E-mail: Thunderbird
I'm not that keen on Apple Mail, I prefer Mozilla Thunderbird. Since the latest version does not support PPC, I'm using version 3.1.15. I've also tried Eudora but I find Thunderbird easier to use.


Twitter Client (Updated): YoruFukurou (NightOwl) Twidget
This was the hardest thing to find. Since the last Authocalypse, there are very few Twitter clients left standing that still run on PowerPC Macs, particularly native clients. I had settled on Syrinx donation-ware, and i found it thanks to this blogpost. However due to lack of RT or Retweet in the app, I've been looking for alternatives and I've now found YoruFukurou which is a much nicer, more usable app. Unlike Syrinx, NightOwl has real time updates, multiple accounts, it's what you'd call fully featured! Update 31/12/12: Alas Yorufukuru seems to have lost PPC support so I'm without a full Twitter client, as I can't find a working free client (with a gui at least) for PPC Mac, apart from Twidget which is useful for a quick check but a bit uncomfortable to use for some serious tweetage.


iTunes Alternative: Vox
iTunes is OK on OSX, but for when I need a quick, lightweight music player there's Vox which can play much more than iTunes, including FLAC, Musepack, Monkey's Audio, OGG Vorbis, and many others. It can even export to AAC, AIFF, Apple Lossless, NeXT/Sun and WAV.


Music Player Daemon Client: Theremin
For accessing music on a server, Music Player Daemon or MPD is very useful and has plenty of clients. My favourite client for OSX is Theremin (named after the groovy hand-waiving instrument).


CD Ripper (Updated 31/12/12): X Lossless Decoder
I used to prefer Max, but I've since discovered X Lossless Decoder (XLD) which is a much more capable app, especially as I have recently had trouble with Max not downloading CDDB info. XLD is very much like a Mac version of Exact Audio Copy, and ideal for those who appreciate quality audio rips.


Mp3 tag Editor: MusicBrainz Picard
Picard is one of the only tag editors I could find that still supports PowerPC with a Universal Binary.


Office Suite: LibreOffice
LibreOffice is the free open source cross-platform office suite based on OpenOffice, I also considered NeoOffice although their latest PowerPC version is not as upto date as their Intel Mac version.


Audio Editor: Audacity
Audacity is possibly the best free audio editor available for all Mac, Windows or Linux and there is a Universal binary available for OSX. 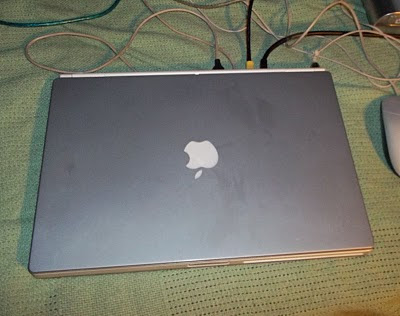 Overall, I'm rather pleased with my Powerbook, it's just about quick enough for most basic stuff and I've been using it as my main laptop since I got it. It's lighter, thinner, more comfortable and has a nicer screen than my other main workhorse laptop, my 1.6ghz Dell latitude D505. I also like the way the Powerbook suspends and resumes perfectly. Don't get me wrong, I still love Linux and I love my Ubuntu desktop machine! I'd almost consider dual booting with Linux on the Powerbook if it wasn't the lack of flash browser plugins for PPC Linux. Also I still miss Hotot which is only available natively in Linux or as a Chrome/Chromium app (which won't run on PPC OSX).

I now have a later 1Ghz Tibook with 1GB of RAM and it runs much nicer with 1GB of RAM (it came with 512MB). I'm dual booting with Leopard and Xubuntu 12.04 and both run very well. I'm using it more than my main laptop (Dell Latitude D430) as I prefer the larger screensize and keyboard of the TiBook, though I often end use my tablet for YouTube. The Tibook is fine for general browsing (Facebook, G+, Twitter web etc). I can't decide which I prefer using on it, Linux or OSX, as they both work well, OSX still has (an old version of) Flash but at least on PowerPC Linux there are proper Twitter clients I can use like Turpial.