A HP dc7800 And A Stubborn Card Reader

Since my home-built PC's cheapo Asrock Alive VSTA AM2 motherboard seemed to be dieing a slow death (one of it's 2 RAM slots having already failed) I needed a replacement. Not having enough money to replace the motherboard and/or CPU, I chanced upon a bargain, an ultra low priced HP dc7800. Although it's not brand new, this machine is still a beast, built solidly and is powerful enough for my liking. It has an E6750 Core 2 Duo CPU (2.66 GHz, 4 MB L2 cache, 1333 MHz FSB) and can take up to 8GB of RAM in it's 4 slots. Since my old boards one remaining slot supported only 4GB and I only had 2GB DDR2 sticks, this was a nice upgrade. So I installed all the DDR2 I had, 2x 2GB and 2x 1GB, for an awesome 6GB of RAM, this machine runs Ubuntu much smoother and gives me enough oomph for some VirtualBox virtual machines. Also, unlike my old board, this has plenty of PCI/PCI-Express slots. 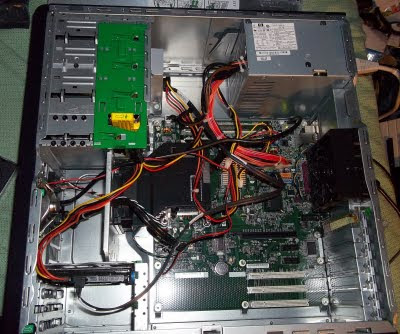 I installed my Nvidia 8400GS graphics card (connected to 19" 16:10 Acer and 19" 4:3 HP monitors), along with the 1TB SATA and 200GB IDE hard disks from my old rig. I also added an 80GB SATA too for extra space. I had to use adapters in the optical drive slots, since I only have one set of "isolation mounting" screws for the two quick change hard drive bays. I also needed to enable VTx and VTd in BIOS. This can be found hidden away in Security, System Security, enable VTx and VTD. Press F10 to save and we're done.

Naturally, once I set the right boot devices in the bios, Ubuntu 10.0.4 (64 bit) booted straight away without any real problems, I just had to do 'sudo sensors-detect' to get lm-sensors to find the new temperature monitors onboard this new rig.

I've been using an external USB card reader for awhile and wanted a tidier, internal reader instead. Having had one lying about in spares for awhile I thought I'd fit it into my 'new' HP dc7800. This turned out to be easier said than done! The floppy bay on the dc7800 only locks a drive in place if the screw holes are in the right place, and the ones on the card reader are nowhere near the right place. After a lot of swearing and sliced fingers, and having accidentally got the reader stuck too far back several times and having a nightmare removing it again, I had a MacGyver moment! I had to put something between the first locating screw and one of the metal guides and found this weird metal ring that was just the job, using the spare screws nearby to lock it in place. 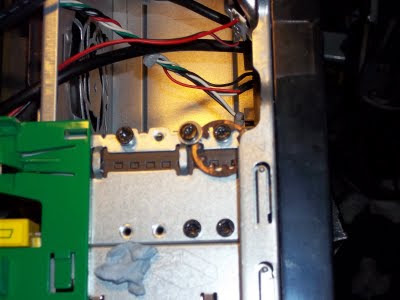 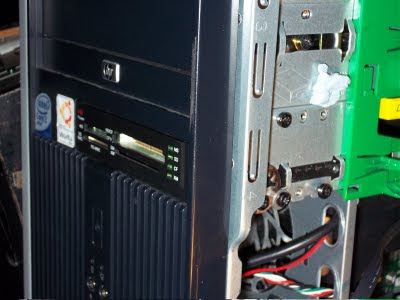 Then I connected the reader to internal USB connectors. After I put everything back together and licked my sharp-PC-case-related wounds, I tried it out with my 4GB SD card from my camera. Nothing. Turns out this card reader was made before the introduction of SDHC cards! Typical! I think I learnt a vital lesson here, fully test a component before MacGyvering it into ones PC's case! I'm still very pleased with this machine and it should serve me well for awhile. One day I'd like to max out the RAM to 8GB and install a decent card reader! 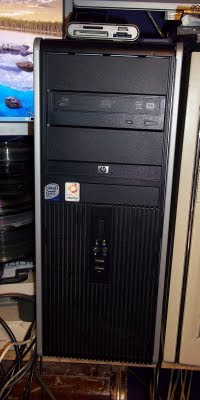