When is free not free? When Apple says so 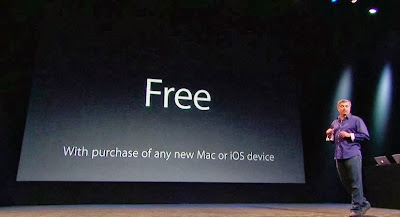 During the announcement they flashed the above image. OS X 10.9 is now free. This has been hailed by the mainstream media and Apple centred sites as the best thing since sliced bread. I was only told about it to begin with, and even though I have never been an Apple user I got a little excited. This was my train of thought.

So now OS X is being given away we can all pop over to the Apple site and give it a go. At least that was the first thing that came to my mind when I was told. I was in a lot of shock to be honest. I never saw this coming. Perhaps Apple are not as evil as I thought. Then I started to wonder would my laptop cut it. I expected it not to. However I had a small glimmer of hope. We all need that little bit of hope to get through some days. This was mine.

About now is when the reality kicked in -


FREE. With any purchase of any Mac or iOS device.


Back up a moment here. How is this free? The MacBook, their entry level machine, starts at $1000. Right, I get you now. It is free if you buy an over priced piece of hardware and the reason it is free is to stop us catching on to the fact that you (Apple) continue to rip off your customers.

But I understand why you want to make your customers think like that. Nobody wants Windows 8, sales of PC's and by extension Windows 8 is dropping at an alarming rate for Microsoft. That is even before you get into Windows Surface, Surface RT and Surface Whatever we are calling it this week. Then, there is the rise of tablet based users another factor in the why Apple may have gone down this path.

Then again perhaps there is another reason why Apple is taking this clever marketing - Linux.

Linux has from day one been free. Anyone can choose from one of the hundreds of different versions out there, download it onto a USB stick and be up and running in no time. So what is different today? For a start Linux is.

Gone are the days when Linux was for geeks, or those who know what they were doing. Linux is now becoming easier to access for first timers with the likes of Ubuntu and Mint. It no longer looks awful thanks to Pear or many, many others. Don't believe me, check out this great list that TechRadar put together of the 50 best Linux Distros.
Free can be free, not just when it comes to actual money. Check back in a couple of days for part two of this when we take a closer look at what freedom with Linux brings you from a non-geek point of view.
Posted by Unknown at 20:52