I have acquired a slightly faulty Dell XT convertible tablet/laptop, the screen no longer stays up in laptop mode and it's also lacking it's pen stylus. Specs-wise it's similar to my Latitude D430, a Core2Duo CPU at 1.33Ghz, 2GB RAM, except this has ATI X1250 graphics instead of Intel 950 and an 80GB 1.8" hard drive instead of a 60GB 2.5" drive. I am unsure as to how to get multi-touch capabilities in either Windows 8 or Ubuntu, in neither does it work out the box, perhaps the Windows Vista drivers may work in Windows 8.

When it was new it would have come preinstalled with Windows XP or Vista. Since the Windows 8 'Consumer Preview' had just been released I decided to have a little play with it on the XT. I used the docking station's DVD drive to install it and it took about 30 minutes. Single finger touch works out the box. 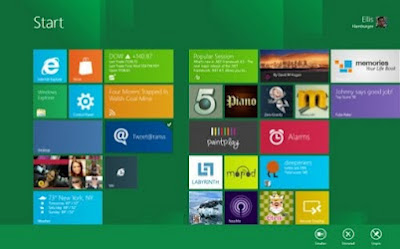 Windows 8 feels clunky to me, like Windows 7 with the ugly Metro interface bolted on the front. Switching from the touch-friendly Metro to the not very touch friendly desktop and back again feels awkward, and doing that every time I want to search for an app gets old fast! I'd much rather use an OS that is built for touch screen mobile devices from day 1, such as Android, iOS etc. I did like the on-screen keyboard, but for web browsing it wouldn't pop up for Firefox, only IE, although apparently there will be an 8-friendly version coming soon.

After a brief test of Mint with Gnome3/Cinnamon (which I can't get on with, not keen on the menus and the Mint hijacking of the Search Add-ons), I formatted it and installed Ubuntu 11.10 64bit liveCD. Then I upgraded to the latest 12.04 beta. Although I'm not that keen on Unity for the desktop, in this case it does suit a tablet and has improved a bit recently. Having said that I still don't like Global Menus and would prefer to be able to easily disable that feature. Again, the single-finger touchscreen works out-the-box. Unity is still not touch-friendly enough (grabbing those overlay scrollbars is tricky for instance) but feels and looks a lot nicer than Metro and the MyUnity tool is very useful too if you want to tweak Unity settings. Sadly, ATI dropped support for the X1250 graphics card, which means I can only use Unity 2D and some 3D games/apps don't work very well. 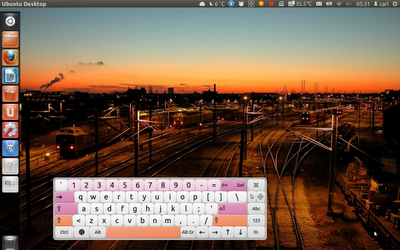 For touch use, I've found it best to disable auto hiding of the launcher (Settings, Appearance, Behavior). Ubuntu's default onscreen keyboard is called Onboard. It's OK once you resize it so you can actually use it with your fingers, though I wish it would automatically pop up and hide for dialogue boxes, like Caribou does. Enable the onscreen keyboard from Settings, Universal Access Preferences. Onboard should also appear on the LightDM login screen too. If you have upgraded from an earlier version of Ubuntu that used the GDM2 login screen (or if LightDM is trashed and you have switched to GDM), you can make Onboard appear by adding "onboard -s 684x200 -x 170 -y 568 &" to /etc/gdm/Init/Default between the last 'fi' and 'exit 0' as shown in this how-to. No need to change any other settings as shown on there though. Update: The only really frustrating thing about Unity is the dock which on this device is far too easy to accidentally open apps when trying to scroll the dock! 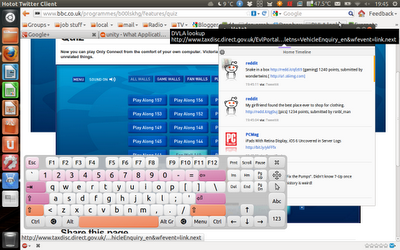 Overall Ubuntu 12.04 works fairly well on the XT, despite the lack of proprietary graphics drivers. With a bit more improvement, Unity could be a good touch friendly desktop, though I still don't plan on using it on my main dual-monitor desktop or other laptops and desktops where I prefer Gnome Classic or XFCE (Xubuntu). And despite the odd bug here and there which should be fixed by it's release, 12.0.4 should be a decent LTS.
Posted by Carl Draper at 19:35

Affan, yes, especially if you have 2GB or more RAM (I upgraded mine to 3GB, but it will take 4GB) and/or you could always install a lower resource desktop like Lubuntu if needed.

That makes sense... but I am worried if Lubuntu will come with the touch/stylus drivers that I am hearing work right out of the box with ubuntu.

Install Ubuntu first and then if it feels a bit sluggish and you can't add any more RAM, then install the Lubuntu (sudo apt-get install lubuntu-desktop).

Carl, Just wanted to report that lubuntu works fabulously on the XT.

a) did you get drivers to use the tablet keys and scrolling button on the XT?

b) I really want to use it for giving interactive lectures in my course. However, LibreOffice Impress handling of the stylus is not really good. Any suggestions?

Again, thanks for pointing out lubuntu.. that really made a FAST boot possible.

Sadly the HDD in my XT died before I could get those buttons working and I can't afford to buy another at the moment, they use an unusual 1.8 inch ZIF hard drive.