Revitalising a Dell Latitude E5410 with an SSD

I have had my Latitude E5410 for a few months and I love it. It's a real workhorse and despite its age it performs amazingly. It's an i5 2.4Ghz machine with 8GB DDR3 and Intel HD Graphics.

However, the ageing hard drive is its only downside. Boot times were very slow and apps could be a bit sluggish to open. I think I noticed this more as my previous computer was a MacBook Air with an SSD.

So I bit the bullet after weeks of deliberation and ordered an SSD. The original 5400rpm Western Digital Blue 320GB SATA hard drive was to be replaced with a Kingston A400 240GB SATA SSD.

The thing I love about this Latitude is its ease of upgradability. Simply pop the bottom off and you have access to the RAM and hard drive. A few screws hold in the drive caddy and a further two screws attach the drive to the caddy. Swapping them over was easy and within 5 minutes the SSD was installed.

Next step was to reinstall Linux Mint 20 Cinnamon 64-bit. I have my trusty USB stick, so installing was easy. I can't say if this was any quicker because I was downloading multimedia codecs at the same time.

However, once installed there was an instantly noticeable speed increase across the whole machine. The next task was to put back all my apps – via Synaptic Package Manager – and it stormed through them. System updates were next and then a few apps that needed to be found online (such as Chrome, Reaper and Geekbench).

Before removing the older hard drive, I did some timed tests to see if this SSD upgrade would make the huge improvement that everyone had said would happen. I then redid those tests with the SSD installed.

As you can see from the table below the upgrade did the trick. Boot time went from a rather slow 150 seconds down to 37 seconds, and apps opening time have halved. 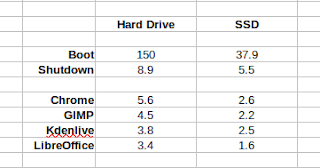 The whole machine feels so much snappier. An added bonus is the laptop is whisper quiet, with the SSD it makes no noise except the occasional whirr of the system fan.

I am extremely happy. It has breathed new life in to my beloved Latitude E5410. Its a chunky machine that I was very happy with and now I am super impressed with the upgrade.

I now have a spare 320GB hard drive that I am not sure what to do with. I could replace the internal DVD-RW in this Dell with it via a converter caddy giving me two internal drives, but I do like having an optical drive even if it only used occasionally.