Upgrading The Hard Drive In My Original XBox

I have just finished the final part of refurbishing my original ‘crystal’ Xbox tonight. I had previously replaced the GPU and CPU paste, cleaned the entire case, replaced the PSU board, system fan, DVD drive and bottom EMF shield. I even replaced the DVD drive belt. I took it one step further and softmodded it using Rocky5 and the Splinter Cell exploit. This gaming beast had the full make-over treatment.

But there was one final step I wanted to do and that was upgrade the hard drive. The original 8GB drive was showing its age and wasn’t really big enough to take advantage of the extra things you can do on a modded Xbox.

So I grabbed a 160GB IDE Seagate hard drive and set about installing it. I could have put up to a 2.2TB drive in it, but my budget was tight. Also putting in a SATA drive requires buying a converter and new IDE cable.

There is a single IDE channel on the Xbox motherboard which the DVD drive and hard drive run off, so only two devices can be hooked up at once, but an Xbox wont boot if the DVD isn’t there – so you can’t simply put the second hard drive in the place of the DVD drive. 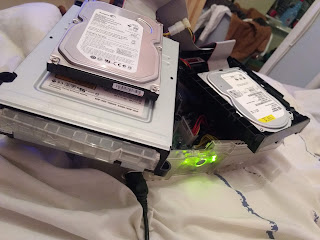 Full instructions are available online, but the basics are, buy a Molex splitter so you can power two hard drives at once, install Chimp a special cloning tool, then quickly remove the IDE cable from the DVD drive while the Xbox is still on and plug it in the new hard drive. This is the ‘hot swap’ method. Now you can run Chimp and clone the old drive to the new drive. Then if everything has gone well, you can shut down everything and put your Xbox back together with your new hard drive in place of the old one. 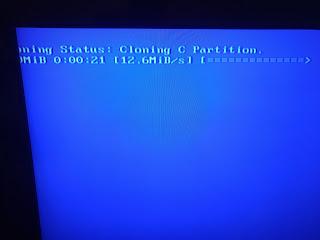 The whole process took about 45 minutes and I am now sitting here with my Xbox running even better than before with a 160GB hard drive instead of the 8GB stock drive.

Replacing the noisy fan and DVD drive made it a lot quieter, but now with the new hard drive, it is super quiet. The new hard drive is a 7200 rpm drive (vs the 5400 rpm stock drive) so it is not only quieter but should be faster. This will be especially handy when copying games to the hard drive and playing them off of it.

160GB might not be the biggest drive, but when each game is less that 5GB, it will hold a large amount of my games. I would need at least 500GB to house all my games and the collection keeps growing. I want it just for my favourite go-to games or the ones I am playing through now. It saves wear-and-tear on the DVD drive and makes loading a lot quicker. 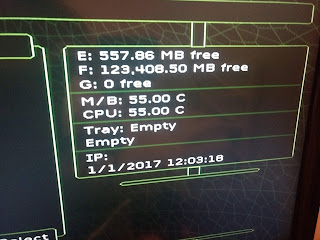 So there you have it. My beloved Xbox has been given a much deserved pampering. I am very happy with it. Not only does my crystal look gorgeous, but it performs super smooth and super quiet too.

I'm now going to start copying a few games across to the hard drive. 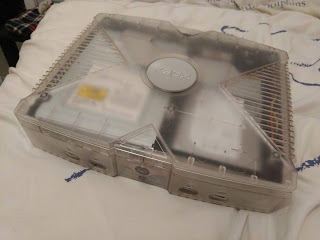