I am not a huge game player, but I do like a console to play on and I prefer older consoles as they are simpler. I don't often get excited about a game either, but every once in a while a game really takes my catches my attention.

So while collecting games for my original Xbox, I came across Destroy All Humans!

It might be from 2005 and I am sure most people have heard all about it or its many sequels and the fact that a remake is coming, but I hadn’t heard of it before. 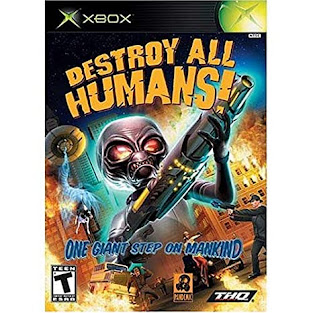 I am not normally a fan of third person open world shooters, but this has a difference.

You play an alien who has been sent back to earth to harvest alien DNA from humans because their planet population is dying out. You run around zapping humans, changing yourself in to them to blend in and performing tasks without being detected. You can also climb in to your space craft and blow up vehicles and buildings.

The whole thing is set in the world of 50’s B-movie science fiction and it is utterly hilarious. For someone who is a fan of these cheesy movies with bad special effects and aliens made out of rubber suits such as classics The Blob, The Day The Earth Stood Still, Attack Of The 50ft Woman and The Creature From The Black Lagoon - this is an excellent hark back to those days. In fact its silliness reminds of the Mars Attacks. which also draws from these classic B-movies.

For the age of the game its graphics still stand up well and once immersed in it you can overlook these anyway. It is truly one of the most fun and unique games I have played in a long time.

I am loving playing through the original and cant wait to find the sequel too for my original XBox.