Upgradeable Laptops... A Thing Of The Past?

Upgradeability seems to be a thing of the past when it comes to modern computers. The obsession with ultra thin ‘everything on the board’ is a problem for technology and the end user. Perhaps that's why I prefer older machines.

Switching from a MacBook Air with zero upgrade options, to a Dell Latitude E5410 laptop recently I was surprised by the upgrade options and the ease of accessibility to do it on this 10 year old laptop.

OK, so the MacBook Air might have been stylish, light and super thin, but that comes at a cost. This Dell Latitude might be chunky, boxy and won't win any beauty awards, but it has bags of upgradeability. 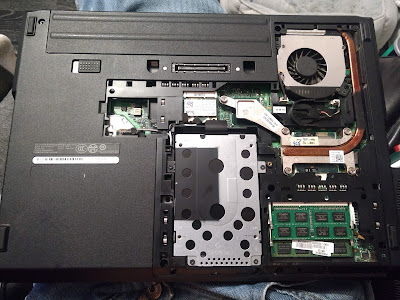 Turn the laptop over and there is an access panel, which is opened via one screw. Open that and you have access to the hard drive, the RAM, the wi-fi PCIe card, the CPU cooling pipe, the CMOS battery and even the system fan. All of which are super easy to take out, clean or replace.

Even on the top of the machine, more complicated repairs are still easier to do than on most hardware. Above the keyboard is a plastic strip where the power button is, it has a small hole which you can easily get a screwdriver or spudger under and pop it off, this gives you access to the screen hinges. While I had it off, I tightened them up, which solved the slight wobble I was seeing. 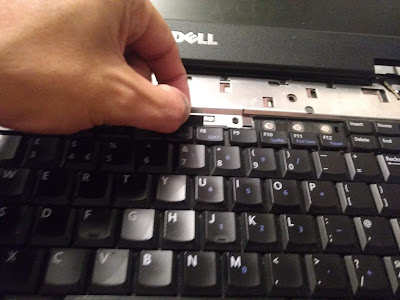 But the biggest surprise was the keyboard. According to the maintenance manual, undo two screws to release the keyboard and simply pull the tap (which is now visible) above the keyboard and you can just pull it out. I was expecting some kind of ribbon cable attaching it to the motherboard – from my experience these can be tricky to detach and reattach. However, this was different, the keyboard connector is a thick plastic tab that is hidden under the top casing and you just pull out the keyboard. I took mine out and gave it a good clean. Putting the keyboard back was super easy, simple slide it back down, put in the screws and keyboard is replaced.

This is an excellent idea. Imagine spilling something on your keyboard. You can remove that from your machine within seconds, wash it, dry it and put it back. Or worse case, you could just buy another one and put it in. 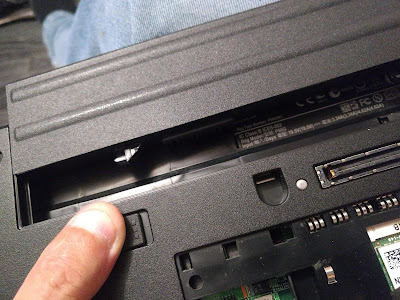 Add this to the fact the battery is replaceable in seconds by simply pushing a tab and pulling it out, this makes this a fantastic machine for those who like to do things to their computers.

Not only that I like to open up kit and give it a good clean, blow out all that dust and dirt and you can really get in to this machine.

The official service manual has a great strip down guide for most parts – some such as the screen is a bit more complex, but that is to be expected. But everything is far more accessible than anything I have used before and the fact that Dell give you instructions and almost permission to do it is an amazing thing.

I think the only thing that isn't replaceable on this laptop is the CPU.

Companies these days don't want you to be able to upgrade. They want you to replace it with a newer model or send it in to them for an overpriced repair.

But for me, I like the idea of upgradeability and repairability. It's my property, I want to be able to do what I want to it. I want to keep it going for as long as possible.

So hats of to Dell – who I have to admit I haven’t had a good word to say about before I got this laptop – for creating such an easily repairable machine.